‘Climate change could be behind Uttarakhand cloudbursts’

March, April and May were warmer than normal over Uttarakhand, which could have contributed to the cloudbursts 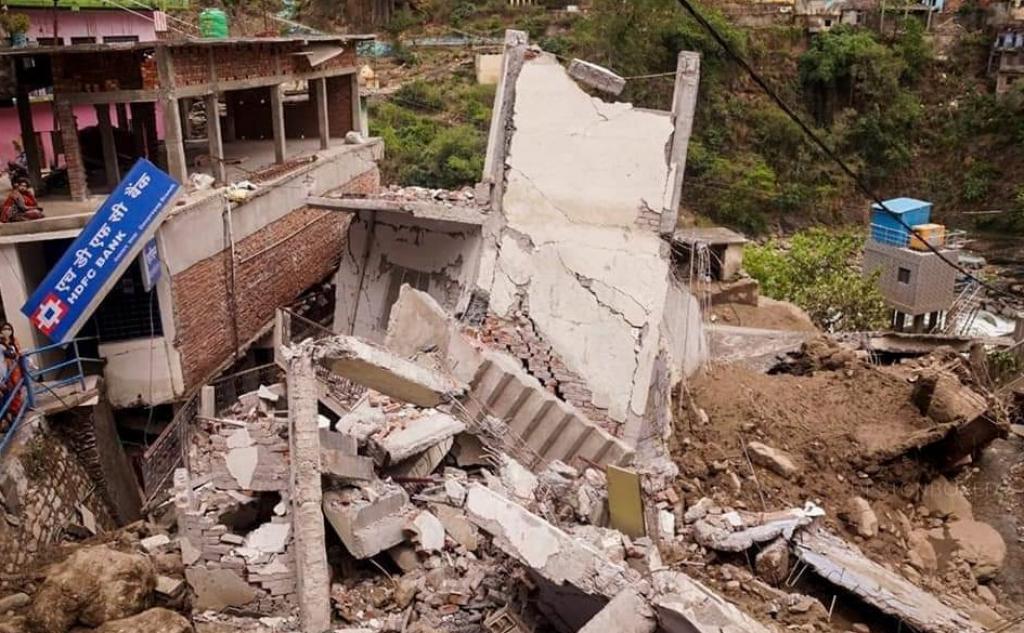 Destruction wrought by the cloudburst in Devprayag town of Uttarakhand. Photo: @INCUttarakhand / Twitter

The recent weather events in Uttarakhand termed as ‘cloudbursts’ were highly unusual and could have been caused by the warming of the region, an expert told Down To Earth (DTE) May 12, 2021.

No casualties have been reported so far in the recent events even though many buildings were washed away and roads were flooded with mud, water and debris.

Raghu Murtugudde, a climate scientist at the University of Maryland in the United States, told DTE that cloudbursts were weather events that were hard to predict by definition.

What is unusual in the current scenario is the very warm temperature anomaly to the west of north India over Iran, Pakistan and Afghanistan. The Arabian heat low pumps winds into the northern Arabian Sea and there has been a strong wind along the coast of Oman and going straight over Gujarat into Uttarakhand. My guess is that this is raising the chances of cloudbursts there.

Murtugudde added that the months of March, April and May were warmer than normal over Uttarakhand. “This would also reduce pressure and drive winds into it,” he said.

Research is supportive of Murtugudde’s statements. Cloudbursts are generally more common in India during the south west monsoon season that begins in June, according to a research paper published in the journal Earth Science Reviews in March 2017.

There was also a low-pressure ridge across the region which might have increased the chances of the cloudbursts.

What is a cloudburst?

Cloudbursts are sudden and extreme rainfall events over a limited area in a short span of time. There is no universal definition of a cloudburst.

However, the India Meteorological Department (IMD) defines a cloudburst as any event where 100 millimetres of rainfall have fallen in a span of an hour over a region that is 20-30 square kilometres in area.

A cloudburst occurs when moisture-carrying air moves up a hilly terrain, forming a vertical column of clouds known as ‘cumulonimbus’ clouds. Such clouds usually cause rain, thunder and lightning. This upward motion of the clouds is known as an ‘orographic lift’.

These unstable clouds cause an intense rainstorm over a small area after becoming heavy enough and locked in the ridges and valleys between the hills.

The energy necessary for the cloudburst comes from the upward motion of air. Cloudbursts mostly occur at elevations between 1,000-2,500 metres above sea level.

The moisture is usually provided by a low pressure system (usually associated with cyclonic storms in the ocean) over the Gangetic plains associated with low level winds flowing in from the east.

Sometimes winds flowing in from the north west also aid the occurrence of cloudbursts. The many factors that have to come together to make a cloudburst event happen make them highly unlikely.

The Weather Channel reported that:

However, it must be noted that there is no official confirmation of ‘cloudburst’ so far and it is unlikely that sufficient heavy rains have occurred at any place for an official declaration. Any incidents of very heavy rain within a short span of time often get termed as a cloudburst while the official definitions usually vary across the world.

The Earth Science Reviews paper also pointed out that the IMD definition of a cloudburst needed to be changed based on the region where they occurred, the local normal rainfall rates, damage potential and vulnerability of the region.

In 2019, there was a cloudburst event in Chamoli district while there were a dozen of these events in 2018. But the official response to these events has been slow.

In January 2021, the IMD and state government installed a doppler weather radar in Mukteshwar in Kumaon, which had been in the pipeline for many years.

The reason for the installation is to predict cloudbursts and other extreme rainfall events, further generating alerts through early warning systems. The plans were set in place after the devastating Kedarnath cloud burst in 2013 that killed more than 5,000 people in the region.

“Doppler weather radars are ideal for near-real time tracking of potential cloud bursts. Especially if they have a network which allows them to track winds and moisture,” Murtugudde said.

The current radar is anywhere between 200-400 km away from the places where the recent cloudburst events have happened. Hence it was not of much help in predicting them.

These two radars will be much closer to where the recent events have occurred. The four cloudburst affected districts along with others in the state have also been put on heavy rainfall alert for May 12 and May 13 due to an active western disturbance.