‘Millets can solve our food needs as climate changes’ 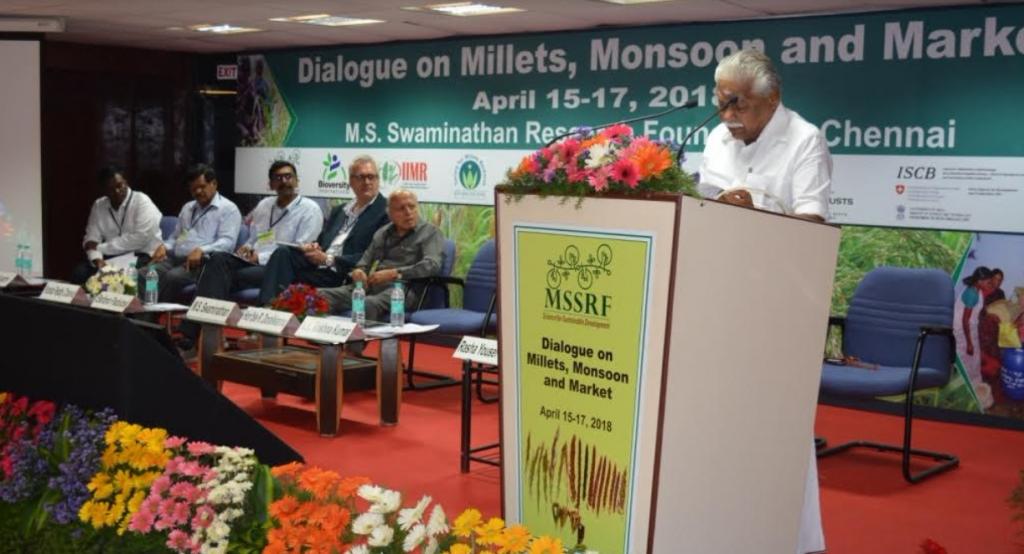 Millets should be promoted as they increase soil fertility, consume less water and have a high nutritional value, says Konda Chavva, assistant representative of the Food and Agriculture Organization (FAO) at a three-day meeting organised by the MS Swaminathan Research Foundation in Chennai.

The meeting, titled ‘Dialogue on Millets, Monsoon and Market’, commenced on Sunday (April 15). The government had declared the year 2018 as the National Year of Millets.

“To adapt to climate change, we need crops that have greater resilience and don’t need a lot of scarce natural resources. Millets can adapt to temperature changes, moisture-regimes and input conditions,” adds Chavva. “Millet farmers do not burden the state, demanding irrigation or power, and that makes them the ‘Future Smart Food’.”

The first day of the event saw a discussion on various pilot projects that introduce millets into mainstream public distribution system (PDS). One such project is called Tejaswini, under which the women and child development department is introducing millets in the meals served in aanganwadis and children’s homes.

Since India, which supports 15 per cent of the world’s population, but only has 4 per cent of its water resources, promotion of millets could be helpful. “Millets are capable of growing under drought conditions, under non-irrigated conditions even in very low rainfall regimes between 200 mm and 500 mm and they have low carbon and water footprint,” says the assistant FAO representative.

When it comes to productivity, Mathimaran, a senior scientist from FiBL, Switzerland, a research institute of organic agriculture, presented a study on new strains of micro fungi being introduced into the soil. Following a process of bio-fertilisation and bio-irrigation, the fungi helps develop a connection between legumes and millets and this increases the yield.

“Further, millets offer opportunities for the private sector to develop consumer-friendly, ready-to-use and low-cost food products. These products could cater to the needs of the population across the spectrum, as all of us need them, either to fight malnutrition or over-nutrition,” adds Chavva.

While delivering closing statements for the day, Seetharam, a scientist at Indian Council of Agricultural Research, says to be able to efficiently feed the growing population, we need to increase the production of and demand for millets.