A number of polls suggest that Democrat voters also consider climate change to be a top-tier issue, as important as healthcare

Election Day is more than a year away, but the race among Democrats in the US to take back the White House is heating up. While the field consists of about 20 presidential hopefuls, the ones leading the polls are former vice president Joe Biden and senators Elizabeth Warren, Bernie Sanders and Kamala Harris. These four standard-bearers represent a party, which unlike President Donald Trump and his Republican Party, is known for climate-friendly policies.

A number of polls suggest that Democrat voters also consider climate change to be a top-tier issue, as important as healthcare. For a majority of world leaders, these presidential candidates are the last hope to make the US, the biggest carbon polluter in history, stay committed to the 2015 Paris Agreement on climate change mitigation. But are they taking it seriously?

One touchstone for gauging their climate action commitments is the Green New Deal (GND) resolution, introduced by the young firebrand Congresswoman Alexandra Ocasio-Cortez. It aims to dramatically cut US emissions by promoting renewable energy and simultaneously address economic and racial inequalities.

The centrepiece of GND’s climate agenda (and the only clear target) is to switch US power production entirely to zero-emission sources by 2030. Though ambitious and without clear energy pathways — allowing Republican lawmakers to continuously reject the resolution and sceptics like Trump to make absurd claims like a $100 trillion cost — GND has been embraced, to varying degrees, by all the four candidates.

But this embrace of GND does not automatically make the Democrats’ proposals ambitious. Consider this. While advocating that global emissions will have to hit net-zero by 2050 to stay below the global warming threshold of 1.5°C, GND does not recognise the fact that the US, being a massive historic polluter, should aim at a net zero carbon economy well before 2050.

Jay Inslee, who is often referred to as “climate candidate” for the Democrat nomination (who now polls at just 2 per cent), recognises this gap and advocates a 2045 target for net-zero emissions. But none of the leading candidates have voiced their opinion about it.

The Paris Agreement finds mention in most Democrats’ stump speeches, but that’s only because of former president Barack Obama’s signature achievement if nothing else. Only Biden’s plan seems to take a different tack. He says he will “not only recommit the United States to the Paris Agreement on climate change — he will go much further than that.”

He intends to “lead a major diplomatic push to raise the ambitions of countries’ climate targets”, by convening a climate world summit within his first 100 days in office “to persuade (major carbon emitting nations) to join the US in making more ambitious national pledges”. Other candidates have merely expressed vague disagreements with Trump’s plan to withdraw from the Paris Agreement and made commitments to stay with it. 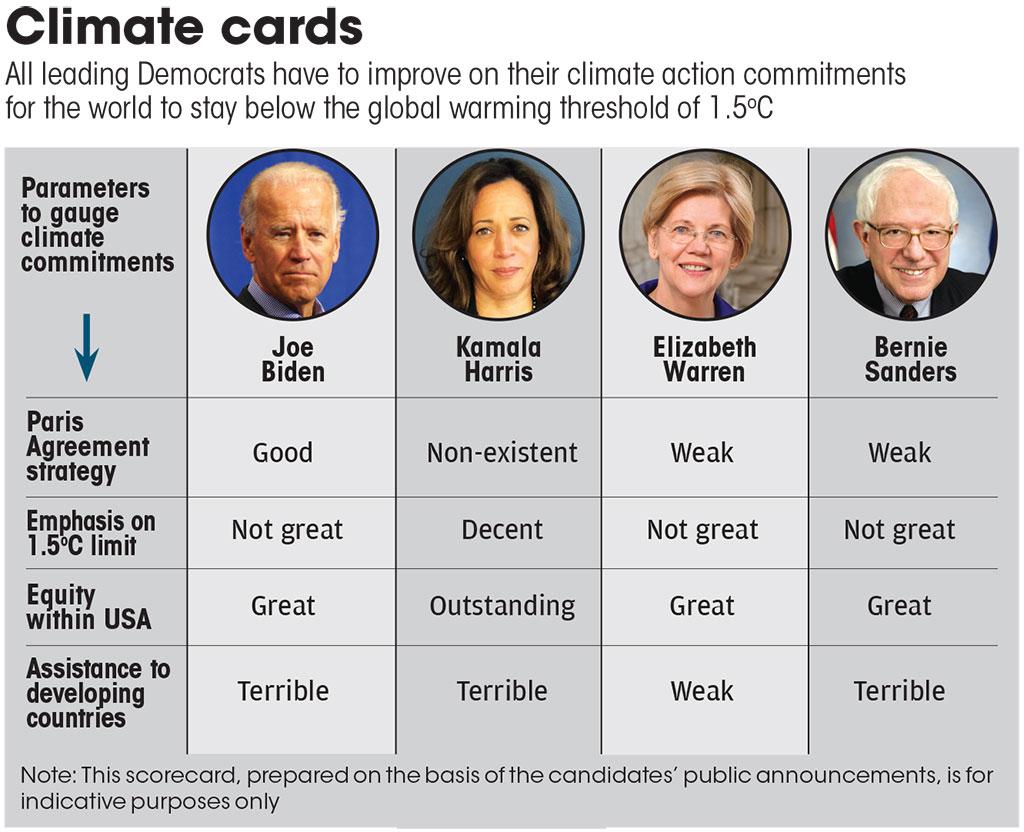 THEY ARE ALSO silent on international commitments to ensure climate equity. Though Warren has proposed a “green marshall plan”, which is essentially a commitment of $100 billion over 10 years to foreign governments, the amount is too low. It is in the form of loans rather than aid and is tied to the purchase of American-made clean technology goods.

On the domestic front, she has, however, committed to a total moratorium on new fossil fuel extraction projects on public land and to the generation of 10 per cent of the electricity by renewables.

Harris has teamed up with Ocasio-Cortez to come up with a “climate equity plan”, motivated by a desire to avoid repeating the mistakes of Roosevelt’s original New Deal which “excluded people of colour—particularly Black Americans—from enjoying its full benefits”.

Only two of the four major candidates have so far announced specific spending plans. Biden plans to invest $400 billion over 10 years in clean energy research and innovation, which would be funded by reversing Trump’s tax cuts, as well as cracking down on tax avoidance. Warren too has made a similar announcement.

Strangely, Sanders, despite having the strongest record of supporting climate action legislation and taking on the fossil fuel industry and fossil fuel subsidies during his election campaign, is yet to provide details on his plan for climate change. One only hopes that the candidates improve on their climate action commitments before it is too late.