An estimated 400 million people currently live in cities with perennial water shortage. The number is slated to go up to 1 billion by 2050 due to rising urban population and the impact of climate change 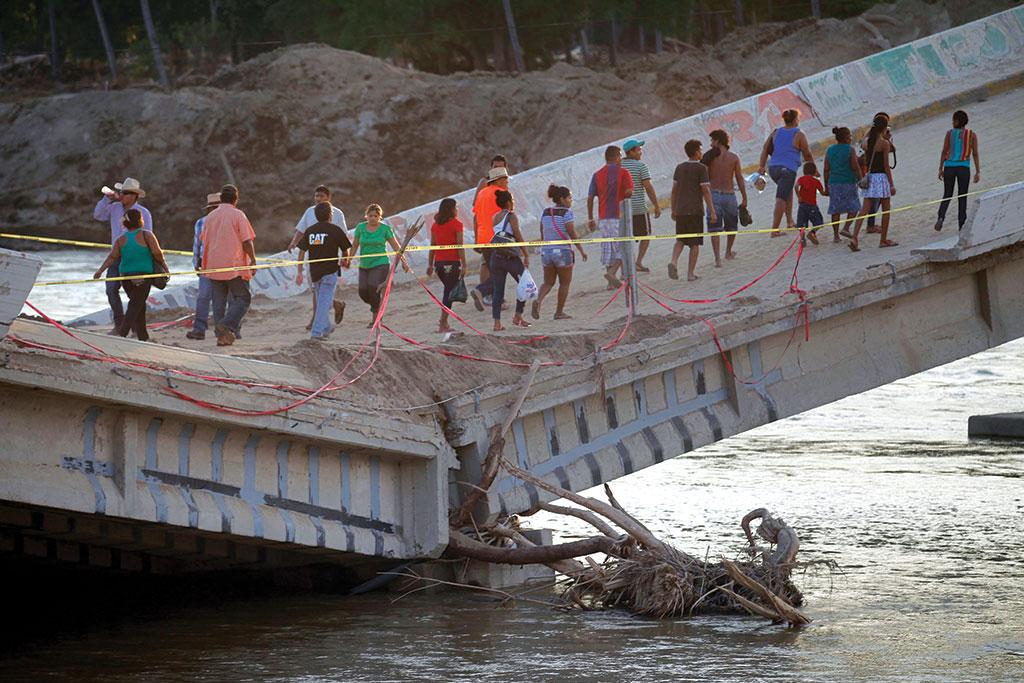 In September 2013, Mexico city witnessed the worst-ever floods in its history, due to which the groundwater and extraction wells were contaminated (Photo: Reuters)

The crisis at Cape Town has shown what unplanned urbanisation can do to water availability in the world’s urban centres. Not only are our metropolises headed to a dry future, the scarcity will increase as people are migrating to urban areas at unprecedented rates. About 54 per cent of the world,or 3.9 billion people, live in urban areas and they will grow between 60 and 92 per cent by the end of the century, says a study published in Nature this January. As a result, the urban water demand will increase by 80 per cent by 2050, it adds. Most worryingly, “climate change will alter the timing and distribution of water,” it says.

About 400 million urban dwellers currently face water shortage, states a 2014 study published in Global Environmental Change (see ‘36 per cent cities to face water crisis by 2050’). This when the average global temperature has not even risen by 1.5°C above pre-industrialisation levels. What will happen when it rises by 2°C? A study, published in Earth System Dynamics in November 2017, has made projections for those scenarios. A 1.5°C rise in the average global temperature will expose 357 million urban dwellers to extreme droughts while the figure for a 2°C rise will be 696 million, it says (see ‘A dry future’). The number of city dwellers facing water shortage by 2050 could be much higher, about 1 billion, says the Nature study.

These rises in temperature are no longer hypothetical scenarios. A draft report by the Intergovernmental Panel on Climate Change (IPCC) leaked this February warns that the average global temperature is set to rise by 1.5°C by the 2040s. What will happen to our cities? 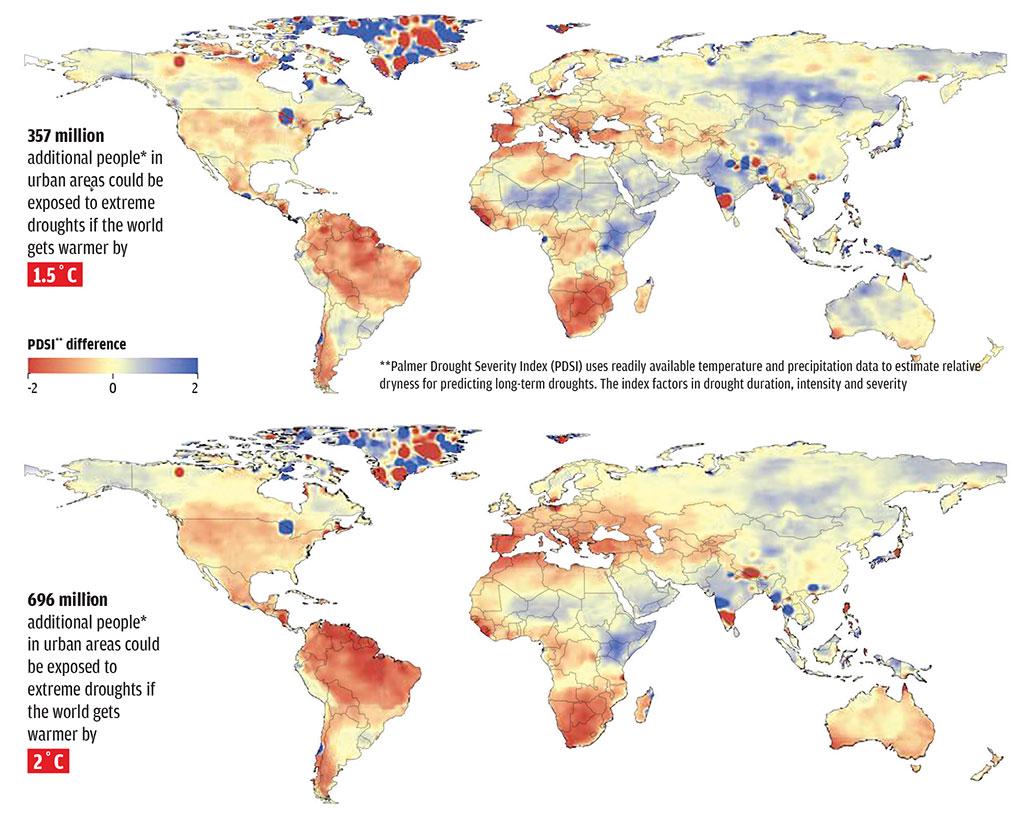 Parched is the new reality: Practically every instance of water shortage that has blighted cities across the world in the past two decades has been preceded by protracted droughts. California, which endured the worst drought in its history between 2012 and 2017, is one glaring example of this trend. Since 2011, the state has received the lowest annual precipitation and highest annual temperature in its history. In 2014, the government declared a drought emergency after the state received one of the lowest rainfalls in centuries (see ‘Dehydrated state of America’, Down To Earth, 16-31 May, 2015). The following year, governor Jerry Brown for the first time announced strict water restrictions after the snowpack on the Sierra Nevada mountain range reached the lowest point in 500 years. After a smattering of precipitation in winters this year, the US’ National Drought Mitigation Center said that over 91 per cent of the state is suffering “abnormally dry” conditions, which means drought is likely to hit soon.

Half way across the globe, Australia is still struggling to emerge from the millennium drought that lasted from 1996 to 2010. As southeastern Australia received below median rainfall during these 14 years, many areas had their driest period on record. The impact was more pronounced in cities, including Perth, Canberra, Adelaide, Hobart, Brisbane and Sydney, which were pushed to the kind of scarce situation Cape Town faces today. Water reserves of Melbourne, for instance, fell from 97 per cent to 33 per cent in the same period.

What’s worse, most studies say that the situation is worsening globally. “Cities and Climate Change”, a 2011 report by UN-Human Settlements Programme, says the area under extreme drought conditions is likely to increase drastically in the coming decades. From less than 1 per cent of the total landmass now, extreme drought could affect as much as 30 per cent of the land by 2100 due to changing precipitation patterns and increasing water demand. A 2015 study, published in the Global Environmental Change, says expanding drylands and increasing urbanisation could make nearly 0.5 million sq km of urban area drought-prone by 2030. This is nearly 300 per cent increase from the 0.17 million sq km of urban area identified as drought-prone in 2000. The expansion is expected to be multi-fold in China, South Asia, North Africa, West Asia and North America. A study published in February 2018 in the Environmental Research Letters, warns that by the end of the century southern European cities, especially in Spain and Portugal, could be experiencing droughts 14 times as intense as those they experienced between 1951 and 2000. In Africa, one in three people live in drought-prone conditions. This number, estimates the World Water Council, could be as high as two in three within a decade. 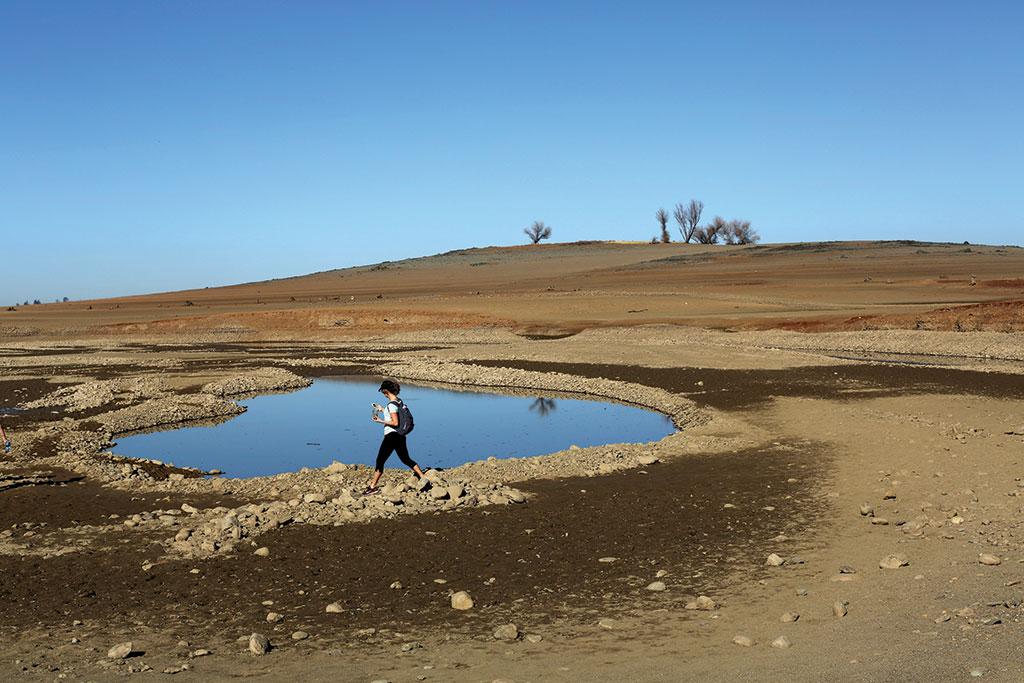 Cities turn into heat islands: Unplanned urbanisation has turned cities into settlements that trap heat due to widespread concretisation. Trapped heat increases the rate of surface water evaporation, and, as a result, dependency on groundwater. It also pushes the consumption levels of potable water, aggravating the water crisis. ‘Urban Heat Island: Causes, Effects & Mitigating Strategies’, a study published in the Imperial Journal of Interdisciplinary Research in 2017, says urban heat islands increase demand for water for cooling such as use of swimming pools and fountains or for watering plants. At the same time it degrades water quality of streams, rivers and lakes due to thermal pollution caused by storm water runoff from heated urban surfaces such as pavements and rooftops.

Scarcity amid plenty: Apart from drought-prone areas, even cities that are close to water sources or receive excessive rains and floods, are reporting water crisis. In September 2013, Mexico city witnessed its worst-ever floods. Flood water levels reached 1.6 m above the ground, ravaging 3,500 houses and submerging water-extraction wells. Soon, the region reported a 300 per cent increase in intestinal infections and cholera because the flood had contaminated the city’s groundwater reserves.

Rising sea level, another impact of climate change, threatens the water security of some 360 million people in coastal cities like Kolkata, Shanghai, Dhaka and Jakarta. Most of these cities heavily rely on groundwater, and overextraction has resulted in seawater intrusion, rendering surface and groundwater saline. In Dhaka, one of the most vulnerable cities to sea level rise, salt content in soil could decrease the yields of some rice crops by over 15 per cent by 2050, says a 2015 news release by World Bank. Even road construction will rise by over 250 per cent because higher salt levels in soil cause paved surfaces to crack, adds the report.

Is there a way out? The only way to reverse the trend is by ensuring that the average global temperature does not rise beyond 1.5°C. As per the leaked IPCC report, this would require historic and unprecedented changes in countries’ emission trajectories and that appears unlikely. It’s time the governments started managing their waters wisely.

(This story was first published as part of a cover story in the 16-31 st issue of Down to Earth under the headline 'Urban deserts').