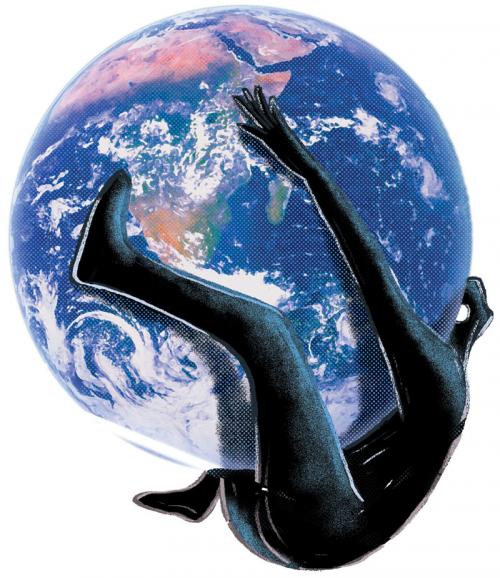 From June 5 to June 16, 1972, countries across the world shed a bit of their sovereignty. The aim was to create a common governance structure for the planet’s environment and natural resources.

The occasion was the United Nations Conference on the Human Environment in Stockholm, the first such worldwide convergence on planetary environment, with the theme ‘Only One Earth’.

When the participating 122 countries — 70 of them developing and poor countries — adopted the Stockholm Declaration on June 16, they essentially committed to 26 principles and an action plan that set in a multilateral environmental regime.

One of the overarching principles was that sovereignty should be subject to not causing harm to the environment of other countries as well.

This was the first globally subscribed document that recognised the “interconnections between development, poverty and the environment.”

These principles were celebrated as a harbinger of “new behaviour and responsibility which must govern their relationship in the environmental era”.

To put it in another way, the planet’s environment and natural resources became a common resource with countries resetting their relationship with nature — from sovereignty over resources to shared responsibility for their sustainable uses.

The three dimensions of this conference were: Countries agreeing not to “harm each other’s environment or the areas beyond national jurisdiction”; an action plan to study the threat to Earth’s environment; and establishment of an international body called the UN Environment programme (UNEP) to bring in cooperation among countries.

The Stockholm conference was historic, not just for being the first one on planetary environment.

Until 1972, no country had an environment ministry. Norwegian delegates returned from the conference to set up a ministry for environment; the host Sweden took a few more weeks to do so.

In 1968, when Sweden first proposed the idea of the Stockholm conference (this is why it was referred to as the Swedish Initiative), cases of environmental degradation and hints of a meltdown of the planet’s atmospheric system had started making news.

Acid rains were being reported; Rachel Carson’s now famous book Silent Spring was just six-years-old but attained biblical status in terms of readership and impact on public consciousness. Species extinction made headlines, like that of the humpback whales and Bengal tigers; the mercury poisoning caused by methylmercury release into the Minamata Bay in Japan entered public discourse.

In the UN General Assembly in 1968, for the first time climate change was discussed using emerging scientific evidence. Though it was still not believable, in 1965, the then US president Lyndon B Johnson’s Science Advisory Committee came out with the report, Restoring the Quality of Our Environment, which was definitive on the role of human-emitted carbon dioxode (CO2) to atmospheric warming.

In 1967, Syukuro Manabe and Richard Wetherald of Geophysical Fluid Dynamics Laboratory of the National Oceanic and Atmospheric Administration, the American scientific and regulatory agency, and Princeton University published a study that actually estimated the global temperature based on CO2 levels at that point in time.

They said “in the absence of unknown feedback such as changes in clouds, a doubling of CO2 from the current level would result in approximately 2°C increase in global temperature”.

Four years of preparation preceded the Stockholm Declaration. Hundreds of scientists and experts from across the globe contributed some 20,000 pages on the human environment which were curated into an 800-page document to be circulated in the conference. Many say the preparation for the conference was the most expansive exercise within the UN system.

Hint of a consensus

The world also witnessed the environment entering into the global political agenda. But it suffered from the many divisions that already existed.

The Cold War was precipitating the division between the East and the West. However, both the United States and the erstwhile Union of Soviet Socialist Republics USSR bloc supported the conference. But a disagreement arose around the participation of two UN non-members — East Germany and West Germany. This ultimately led to the USSR and its allies boycotting the conference.

On another front, immediately after the proposal for the conference on environment, developing countries took it as another ploy by rich countries to usurp natural resources and to hamper their growth. During the UN General Assembly debates in 1968, many developing countries had expressed misgivings about plans for an environmental conference, believing it would be dominated by interests of wealthier, industrialised countries.

Brazil was the most vocal in its opposition to the conference calling it as a “rich man’s show”. It opposed any initiative that could limit its sovereignty over natural resources and constrain economic growth. Latin American countries supported Brazil and there was an imminent boycott of the conference.

While preparations were on for the conference, a proposal to put all natural resources under a global administration witnessed vehement opposition from developing countries.

Inder Kr Gujral, former prime minister of India, told Down To Earth in 1992:

The industrialised nations were basically worried about air and water pollution, while developing nations hoped for assistance to wipe out their sordid poverty without needless damage to ecosystems.

He attended the Stockholm conference as India’s urban housing minister in the cabinet of Indira Gandhi.

The then PM of India, the only head of government who went to attend the conference, famously linked poverty and environment:

There are grave misgivings that the discussion on ecology may be designed to distract attention from the problems of war and poverty. We have to prove to the disinherited majority of the world that ecology and conservation will not work against their interest but will bring an improvement in their lives.

The Stockholm conference indeed started the contemporary “environmental era”. In many ways, it made multilateral governance of planetary concerns mainstream. This led to more than 500 multilateral environmental agreements being adopted in the last 50 years.

Most of today’s conventions related to planetary crises like the United Nations Framework Convention on Climate Change (UNFCCC), the Convention to Combat Desertification (UNCCD), the Convention on Biological Diversity (CBD) and the whole environmental regime being implemented through the UN system trace their origin to the Stockholm Declaration.

Since that summer in Stockholm half-a-century ago, nobody has lived a normal month climate-wise. In April 2017, scientists from Climate Central, an international association of scientists and journalists reporting and researching climate change, released a stunning chart depicting a monthly temperature rise since 1880.

“There has not been a cool month in 628 months,” the research said. In the last 50 years, human-induced changes on the planet disrupted a secure and suitable natural world that was in existence for over 12,000 years and helped humans prosper.

The world is all tuned in to the Stockholm+50, to be held in the same city in June, but with a vastly changed planet, notwithstanding the rooting of the multilateral environmental regime.

On June 2-3, world leaders will not discuss how the past half-century was, but how the next 50 years would be treated with emergency actions. It is also aptly themed as “Stockholm+50: A healthy planet for the prosperity of all — our responsibility, our opportunity.”

If the Stockholm conference could accord some time to all, the current one comes without a deadline, as time has already run out.

Since the “environmental era” started, there are no signs of a restrain on our relationship with nature. UN data circulated to commemorate Stockholm+50 showed that trade has increased gone up 10 times, the global economy has grown five times and the world population has doubled.

“Human development is largely fuelled by a tripling in the extraction of natural resources, food production, and energy production and consumption over the past 50 years,” says an advance draft copy of the document to be discussed at Stockholm+50.

Last year while preparations were on for Stockholm+50, UNEP’s Making Peace with Nature report warned: “Such an uncoordinated response has contributed to the fact that the world is on track to warm at least 3˚Celsius above pre-industrial levels by 2100—despite a temporary decline in emissions due to the pandemic. That is double the 1.5 warming mandated in the Paris targets, which would require a 45 per cent global emission reduction by 2030.”

A visualisation of the next 50 years, published in PNAS on May 4, 2020, states that “1 to 3 billion people are projected to be left outside the climate conditions that have served humanity well over the past 6,000 y [years]”. The study says humans have resided in a “climatic envelope” characterised by ~11˚C and 15˚C of mean annual temperature and “the geographical position of this temperature niche is projected to shift more over the coming 50 y than it has moved since 6000 BP [before present]”.

“It looks unliveable for many,” said Tim Lenton, co-author of the study when it was released. So, many areas in North America and Europe that have comfortable temperatures would become as hot as north Africa. Tim warns: “Where we are headed is a place we don’t want to go.”