A third of US reels under drought

Likely to experience dry spell till at least October

At least one-third of the United States is officially under moderate drought and conditions aren't expected to improve soon. At least 69 per cent of Utah in severe drought and more than 93 per cent of the land area in Utah, Colorado, Nevada and New Mexico in some level of drought.

The data was reported by the US Drought Monitor programme. It is a partnership of the US Department of Agriculture, the National Oceanic and Atmospheric Administration, and the University of Nebraska-Lincoln.

At least 61 per cent of land area in Colorado is experiencing severe drought. More than three-fourths of Oregon, Arizona, and Wyoming are also reeling under drought-like conditions. 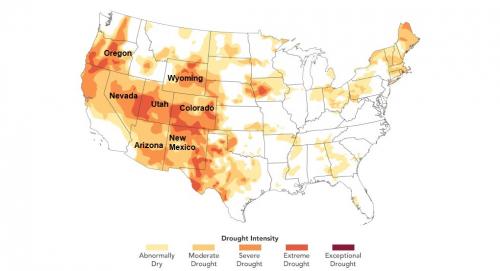 Drought intensity in progressive shades of orange to red as of August 11, 2020. Photo: NASA Earth Observatory

None of the areas showed any sign of drought till mid-2019, according to the data.

The map above is based on measurements of climate, soil, and water conditions from more than 350 federal, state, and local observers in the country. National Aeronautics and Space Administration (NASA) provides experimental measurements and models. 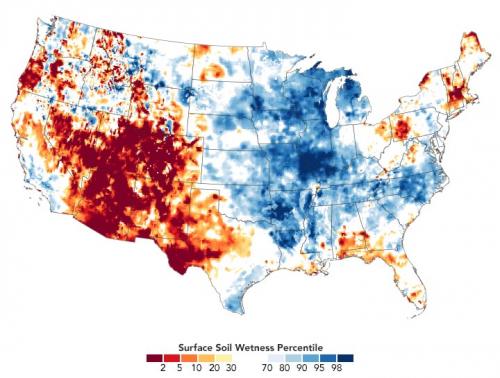 In the second map, the surface soil wetness percentile shows the levels of soil moisture compared to long-term records for the month. While Areas depicted in blue have more abundant water than usual; the ones in orange and red have less.

The deep red reds represent dry conditions that should occur only two per cent of the time, that is, once in 50 years.

The surface soil moisture was measured by the Gravity Recovery and Climate Experiment Follow-On (GRACE-FO) satellites, which detect the movement of water based on shifts in Earth’s gravity field.

Conditions are not likely to get better any time soon, and the dry spell is expected to last till at least October, according to the National Oceanic and Atmospheric Administration Climate Prediction Center.

A poor southwestern monsoon is the cause of the drought, according to meteorologists. In a typical summer, atmospheric high pressure over the southern Rocky Mountains draws moisture in from the Gulf of California and Gulf of Mexico, which makes July and August the rainiest time of year in Arizona, New Mexico, and the Four Corners region.

Meanwhile, several states are experiencing heat waves. Las Vegas has not seen measurable rainfall since mid-April, and Cedar City, Utah, had its driest summer on record with just 0.05 inches of rain.