Africa: The least responsible, but most vulnerable to climate change 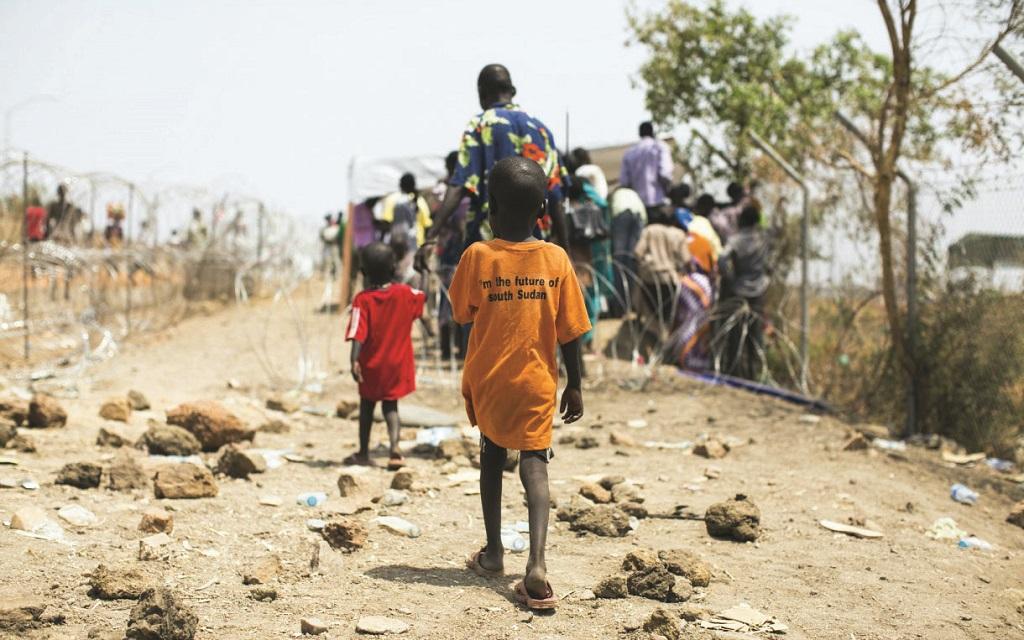 While 95 per cent of South Sudanese population is dependent on climate-sensitive activities for their livelihoods, the ongoing civil war has worsened the crisis.Credit: Oxfamamerica.org

A churn is underway across Africa. An era of civil conflict that followed the centuries of colonial plunder across the continent seems like a thing of the past. Just as the majority of African nations slowly scramble out of violent conflicts and trudge towards developmental paths, a new challenge is putting aspirations of the entire continent in serious jeopardy. Despite the fact that African nations have contributed the least to the accumulation of green house gases in the atmosphere and have had the smallest contribution to global warming, all 54 countries across 30.37 million sq.km of the continent are faced with monumental changes in their environment and natural cycles.

The immediacy of managing disruptive climate events has displaced governance priority of bridging the development deficit. More than 2,000 natural disasters have hit Africa since 1970 affecting 500 million people and killing 0.9 million.

People have one common query: why Africa? The irony is hard to miss. While Africa is responsible for barely 7 per cent of the total greenhouse gas burden of the world, climate change is both figuratively and literally reshaping the continent. Several reports have noted the particular vulnerabilities of African populations to climate change. While the Intergovernmental Panel on Climate Change (IPCC) says that the rate of increase in temperatures across Africa is surpassing the global rate of temperature increase, analysis by Washington DC-based Brookings Institution says that seven out of the 10 most climate vulnerable nations in the world are located in Africa.

Warming in Africa has exceeded the limits of natural variability. According to the IPCC’s Assessment Report 5 (AR5), the near surface temperatures have risen by 0.50 C over the past century. Despite the size and geographical spread of Africa, the only exception to the observed heating trend comes from the central and interior regions of Africa. But even here, there are problems. “It is very likely that mean annual temperature has increased over the past century over most of the African continent, with the exception of areas of the interior of the continent, where the data coverage has been determined to be insufficient to draw conclusions about temperature trends,” says AR5.

By the end of the century, most models show that temperatures across the continent under the “business-as-usual” scenario will be about 3-60 C higher than the average temperature observed at the end of the 20th century, which is already close to being 0.50 C more than average temperatures at the beginning. AR5 notes that the maximum change in temperature by the end of the century is likely to occur in the northern and southern parts of the continent. But the fastest rate of change is expected to occur on the western side. “However, in the tropics, especially tropical West Africa, these unprecedented climates are projected to occur 1 to 2 decades earlier than the global average because the relatively small natural climate variability in this region generates narrow climate bounds that can be easily surpassed by relatively small climate changes,” says the report.

While the AR5 regional profile has singled out Ethiopia and parts of eastern Africa for higher incidences of heat waves, more recent studies have suggested that the problem is likely to affect the entire continent. A study published in Environmental Research Letters in 2016 found that even modest warming of 20 C in global average temperatures would be enough to make heat waves a completely normal occurrence. Since Africa is situated between the Tropics of Capricorn and Cancer, it is likely to be the worst affected.

In 2017, the European Commission conducted the most comprehensive analysis of the risks of heat waves in the continent. It found that equatorial and sub-equatorial Africa will be particularly badly affected. Under the business-as-usual scenario, “the Gulf of Guinea, the Horn of Africa, the Arabian peninsula, Angola and the Democratic Republic of Congo are expected to face, every 2 years, heat waves of length between 60 and 120 days. Once every 30 years heat waves are projected to be longer than 180 days over parts of central Africa and the Arabian peninsula.”

Rising temperatures are altering the landscape of Africa. In March 2018, a study published in the Journal of Climate shows that the largest desert in the world—the Sahara—has been expanding due to shrinking rainfall and extended dry conditions. Armed with 93 years of field and satellite data, researchers say that the Sahara has expanded by about 10 per cent—close to a staggering 1 million sq km. If it were a nation, the expanded area itself would be the 30th largest country in the world. In southwest Africa, there are reports that the hot Namib Desert too is expanding.

Lawrence Biyika Songa, chairperson of the Uganda Parliamentary Forum on Climate Change, says, “We are reeling under the impacts of climate change. It is manifesting in the form of prolonged dry spell and flooding.” In Uganda, landslides have been reported in the mountainous areas in the east at the slopes of Mountain Elgon and in the west around Mufumbiro and Rwenzori ranges where there has been rampant deforestation. “Landslides have become frequent. This has never occurred in Ugandan history,” says Songa.

Flash floods amid prolonged dry spells have caused soil erosion and this has degraded agricultural lands. What has made matters worse is disease and pest attacks on major food security crops such as cassava, banana, beans, rice and groundnuts among others. For instance, coffee, which is a key cash crop of the country, is affected by wilt disease and twig borer. On the other hand, heat waves are so severe that there are widespread local clashes over access to water resources. IPCC says that average temperatures in Uganda will increase by up to 1.50 C in the next 20 years and by up to 4.30C by the 2080s.

In the latter half of the 20th century, the continent has been witnessing extended spells of drought and extreme rainfall. The rapid and successive swinging between dry and wet conditions has devastated regions in the south and east of the continent. According to the IPCC report, it is “very likely” that the northern and southern parts of the continent will experience a decline in precipitation levels and undergo more intense dry conditions in the future. At the same time, the eastern and central regions are set to have a wetter future. However, wetter doesn’t necessarily mean better. IPCC notes that over the last 30-60 years, extreme precipitation changes alternating between tempestuous rains and prolonged droughts have been observed with increasing frequency.

“We usually receive rain once a year from July to October. But this year, there was no rainfall,” says Gloria Ato, a farmer who grows sorghum. One can sense the depression of farmers like Ato who have come to know through the weather forecasts that the dry spell would be longer this year.

While extreme weather is exposing Africa’s infrastructural and economic frailties, another creeping risk that is becoming more evident is the impact of changing climate on food security in the continent. Global warming of 20 C would put over 50 per cent of the continent’s population at risk of undernourishment. Projections estimate that climate change will lead to an equivalent of 2 to 4 per cent annual loss in GDP in the region by 2040. Currently, there are about 224 million undernourished people in the continent—jumping from 21 per cent in 2015 to 23 per cent in 2016, according to a 2018 FAO report.

Over the past decade or so, warnings of possible famines in parts of eastern and southern Africa following long periods of protracted droughts have become common. In 2017, such warnings were issued for several nations in eastern and southern Africa. Ocean warming and acidification are depleting marine ecosystems, which provides nutrition to millions of inhabitants living on Africa’s large coast (see ‘When oceans fill apart’ on p48). An analysis of fisheries in 132 countries by Edward H Allison et al in 2009 revealed that about two-thirds of the most vulnerable countries are situated in Africa. The worst affected are likely to be coastal countries in West Africa where value of fish is expected to decline by more than 20 per cent, equivalent to an annual loss of US $310 million per year by mid-century, according to AR5. The problem of nutrition depletion is not limited to marine ecosystems.

Climate change has also put coastal ecosystems under a serious threat. Across Africa, Ghana has the highest concentration of people and infrastructure along the coastal belt. More than 2.5 million Ghanaians have built their homes along the coast, which stretches for 550 km. Fishing is the main source of livelihood for these residents.

But over the last four decades, hundreds of these homes have submerged into the Atlantic Ocean. In fact, large parts of Ghana are now under sea water. Take Kporkporgbor for instance. It used to be a vibrant coastal community in the Keta Municipality of the Volta Region. The community had more than 50 houses, a church, playground and a population of more than 500 people. Today, the sea has swallowed all, except one of the houses.

“Everybody is affected. There is no work. People have nowhere to sleep. A lot of them have moved out of the district,” says a former resident. It’s usually a gradual erosion of the land. High tidal waves sweep the ocean water onto the land. After some hours, the sea dissolves portions of the land into the water.

While the challenges for Africa running into the future become clearer by the day through experiences and projections, the onus now lies on African governments to prioritise sustainable and resilient systems particularly in agriculture and energy. Unfortunately, as things stand, Africa still plays a small part in a world economy that has routinely brushed the continent’s considerable challenges and issues under the carpet.