Agenda for CoP26: How to achieve net zero

At Glasgow, the world must focus on plans and targets to make developed countries net zero by 2030 and make sure that these are achieved 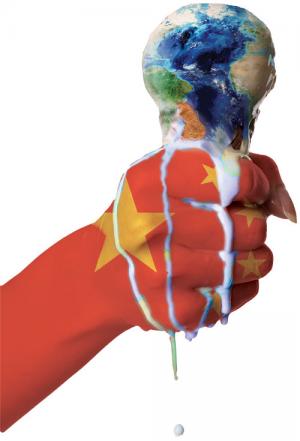 The race to ‘net zero’ has become a rallying point for leaders and civil society alike. But this call for action, however shrill, discounts what it means for the rich and poor countries to get the world to the point when, as the Intergovernmental Panel on Climate Change (IPCC) says, “human activities result in no net effect on the climate system.”

Net zero is not part of the Paris Agreement, an international treaty on climate change, adopted in 2015. It emerged as a concept in IPCC’s 2018 special report “Global Warming of 1.5°C” (SR1.5), which said global emissions need to be 45 per cent lower than the 2010 levels in 2030 to keep the temperature rise to 1.5°C above the pre-industrial level.

This means carbon dioxide (CO2) emissions must be negated by an equivalent amount of CO2 absorbed or removed by various means.

To keep emissions ‘net-net’, countries can either plant trees and restore ecosystems in their territories for sequestering CO2, or increase the carbon offset programme of the world so that trees planted in the homes and habitats of poor countries are accounted in the carbon balance sheet of the rich paying countries.

The other option is to artificially sequester CO2 from the atmosphere and bury it permanently in the ground using carbon removal technologies.

Of the 192 countries who have signed the UN Framework Convention on Climate Change, 65 have announced national net zero targets.

By 2021, Bhutan and Suriname are the only two countries that have achieved net zero — meaning, they sequester more carbon in their forests than they emit.

Uruguay has set an ambitious net zero target for 2030 and the rest of the countries have said that they will get there by 2050. China has set a target of 2060.

It is clear that the idea of net zero is aspirational. It provides momentum for change. Some countries have strengthened this intent through national legislation.

In fact, 21 per cent of the world’s 2,000 largest public companies have also announced net zero targets as of March 2021. 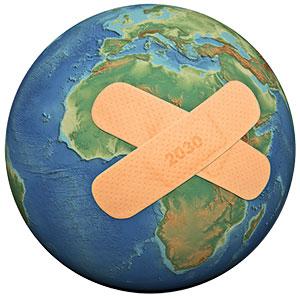 But how to get there?

Most countries do not yet have clear plans on how to achieve net zero by 2050, or in the case of China, by 2060. Most projections rely on removing CO2 from the atmosphere by enhancing the planet’s natural carbon sinks or through carbon removal technologies.

Let’s analyse the natural sinks. Land and the oceans absorb carbon and thus play a key role in the carbon cycle. However, even in the best-case scenario, major components of the land-based sinks, such as forests and soil, cannot sequester all the carbon we currently emit.

By comparison, the energy sector emitted 33 GtCO2 in 2018; coal alone accounted for over 10 GtCO2 of this. Besides, forests are already under threat from wildfires, drought, rising temperatures and industrial logging.

No doubt, preserving natural intact forests and promoting responsible use of forests and agro-ecology in partnership with communities has countless co-benefits. But this cannot act as a substitute for emissions reductions.

CCS captures waste CO2 from large sources such as factories or fossil fuel power plants and stores it underground. IPCC’s SR1.5 report sees a limited role for it because electricity production needs to be largely shifted to renewable sources by 2050.

Coal power plants, even with CCS, need to be completely phased out by 2050. CCS will also not have much impact when used in natural gas power plants as its share in the electricity mix, as IPCC indicates, will be be limited to 8 per cent by 2050.

Despite its existence since the 1970s, CCS is yet to scale up to levels adequate to meet IPCC’s goals. As of 2020, the world had 26 operational CCS facilities capturing 36-40 megatonnes of CO2 per year, according to the Global CCS Institute, an international think tank.

Of them, 24 were in industries and two in coal power plants.

Direct Air Capture and Storage (DACS) technology, as the name suggests, sucks CO2 directly from the air. Among the various carbon removal technologies, DACS is the only one that can remove carbon at climate-significant scales.

If it is run on renewable energy, it could deliver negative emissions. However, it consumes large amounts of electricity, making the technology expensive — $94-232 per tonne of CO2e.

Bio-Energy Carbon Capture and Storage (BECCS), which captures CO2 from biomass-based power plants, has been granted a bigger role in IPCC’s SR1.5 report. It says BECCS needs to sequester up to 8 GtCO2e each year by 2050, but currently all active BECCS projects sequester a total of 0.0015 GtCO2e per year.

Economic viability of the technology is also highly uncertain — the cost is estimated at $15-400 per tonne CO2e. Besides, BECCS threatens food security by promoting diversion of land for biofuel production.

It is estimated that rolling out BECCS at scale will require up to 3,000 million hectares — about twice the land currently under cultivation globally. 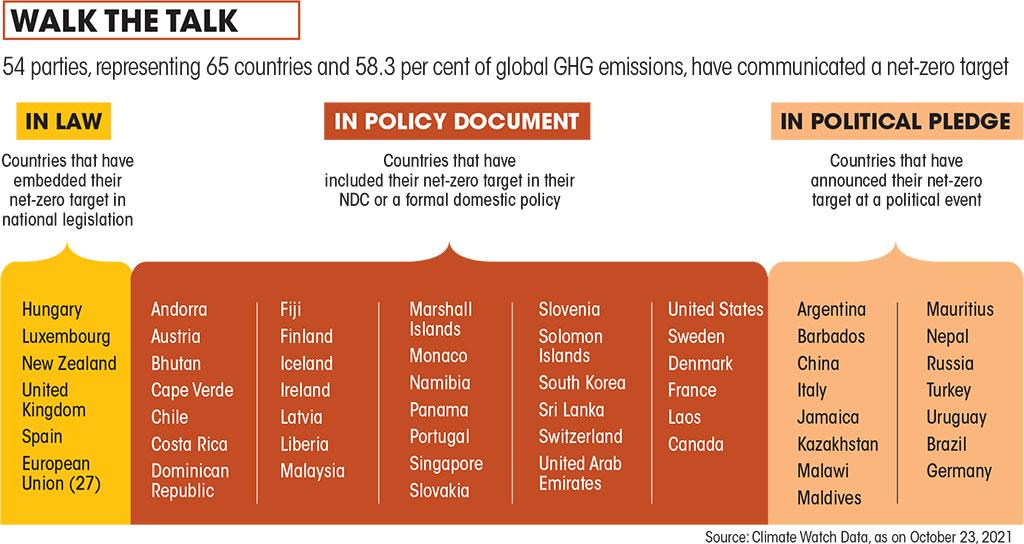 This would provide space for countries like India — way below in the list of countries responsible for historical emissions and current emissions — to set their net zero targets by 2050.

In today’s scenario, when rich countries are dragging their feet on net zero emissions, what could or should India do? Should it set its net zero goal for 2070 — 20 years after the US and Europe and 10 years after China? What should countries of Africa do? Declare net zero by 2080? What will this mean for climate crisis and the need to keep temperature rise to 1.5°C?

Then there is the question of the carbon budget, which is limited and has already been appropriated. IPCC says to stay below 1.5°C rise, the world is left with a carbon budget of 400 Gt from 2020.

The net zero plans of the historical polluters and China shows that these countries would continue to occupy and even appropriate more carbon space. So, at CoP26, the world must focus on plans and targets for 2030 and make sure that these are achieved. Otherwise, the world will lose more time. This clearly is not an option.