An Indian was the first to scientifically document a tornado’s path: Study

Babu ChunderSikur Chatterjee’s paper was the earliest record of a tornado’s dynamics in the history of meteorology, according to the study

Babu ChunderSikur Chatterjee, an Indian scientist employed with the Surveyor General of India during the British colonial era, was likely the first person to scientifically document a tornado’s path in 1865, a study from the Indian Institute of Tropical Meteorology (IITM), Pune, has claimed.

By carefully searching and analysing papers about tornados, Saumyendu De and AK Sahai, scientists at IITM Pune, concluded that Chatterjee’s paper was the earliest record of a tornado’s dynamics in the history of meteorology.

Chatterjee had published his findings in a journal named Proceedings of the Asiatic Society of Bengal, in a paper titled ‘Note on a whirlwind at Pundooah’. The paper described a tornado’s dynamics in meticulous detail and was accompanied by a sketch that mathematically depicted its scale, track and rotation.

“There is a legacy of meteorological research in India. We find that it is Chatterjee’s brilliance and nature’s assistance that helped him decode a tornado’s scale and dynamics with such scientific rigour that his conclusions are relevant even today, that is, more than a century later,” De said. 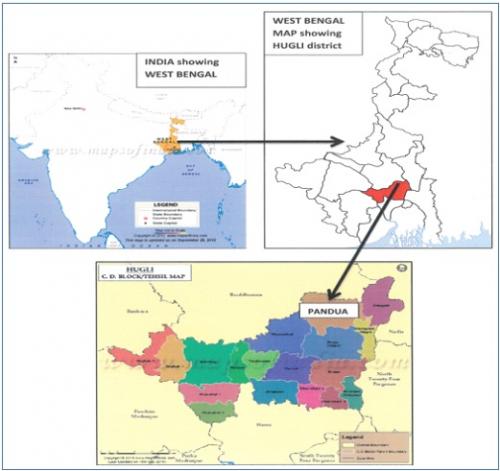 Pandua in Hugli, West Bengal where the tornado occurred in 1865

At the time when Chatterjee published his paper, records of extreme weather events in India existed as eye witness accounts or entries in ships’ logbooks. This remained the situation for most of the nineteenth and early twentieth centuries.

But Chatterjee did it differently. He quantitatively mapped the entire trail of á tornado’s destruction. He benefited from the rare opportunity to observe a tornado passing through a railway track where there were conveniently placed markers at predefined locations like railway line mileposts and telegraph posts that enabled him to observe and make clear measurements of the tornado’s direction, dynamics and path. 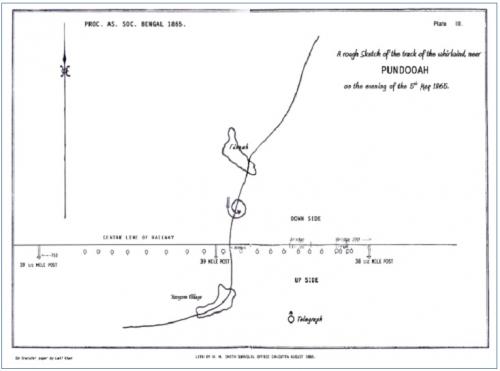 Chatterjee’s sketch of the tornado track and rotation which crossed a railway track at Pandua (R).The sketch figure was reconstructed. (Courtesy: Rajanikant Shinde, IT Engineer, IITM)

A tornado appears as a strong whirlwind, which is a rapidly rotating column of air with a suction spot at its centre that is in contact with both the Earth’s surface and a thunderhead cloud. It is generally accompanied by extreme weather such as heavy downpours, hail storms, and lightning.

The tornado documented by Chatterjee had occurred on May 5, 1865, at 18:00 hours in Pandua, located in the Hooghly district of West Bengal. Pundooah is a railway station in the Pandua area of Hooghly.

“It is interesting to establish the length of time for which society has had an affinity for a given subject. Our study provides a means by which one compares the development of scientific knowledge at different periods in time across the world,” Sahai noted.

De and Sahai have published the evidence piece in a recent issue of the journal Weather of the Royal Meteorological Society. IITM Pune is under the Union Ministry of Earth Sciences, Government of India. (India Science Wire)