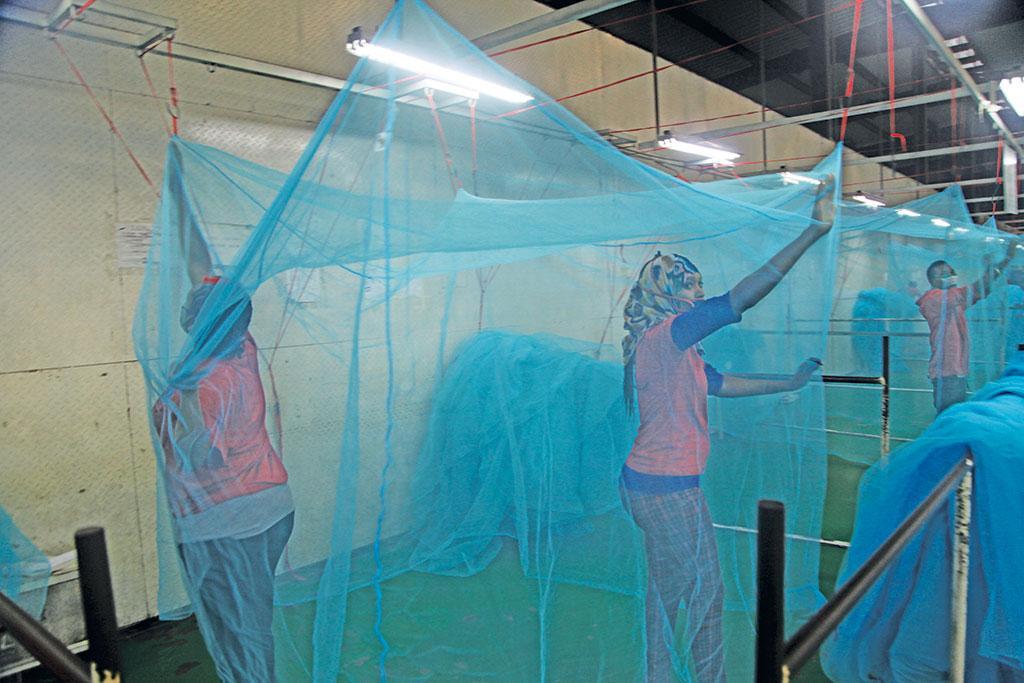 Due to climate change, vector borne diseases such as malaria, Rift Valley Fever and trypanosomiasis will increase. Use of protective measures such as bed nets would have to increase multifold to avoid vectors (Photo: Reuters)

Every week, the World Health Organization (WHO) releases information on disease outbreaks across regions. On April 6, the epidemiological alert from the Americas gave an update on the situation of merely one disease, measles, in the region. The same day, an alert from the African region reported 49 disease outbreaks. These included reports of 23 diseases including cholera, Crimean Congo haemorrhagic fever, dengue and meningococcal disease. Though these diseases are not new, their incidence and pattern has changed due to climate change.

For example, in the first three months of this year, there were 7,403 cases of the airborne bacterial disease meningococcal meningitis in the meningitis belt of Africa. Meningitis outbreaks have links with weather patterns, such as strong El Niño events, which result in lower than normal rainfall. Dry season, dust winds, cold nights and upper respiratory tract infections combine to damage the nasopharyngeal mucosa, increasing the risk of meningococcal disease caused by bacteria Neisseria meningitidisis. Just like meningitis, vector-borne diseases too are expected to grow with climate change. In Tanzania, the burden of trypanosomiasis could increase because of the changing climate and land use changes in the Maasai steppe ecosystem. African trypanosomiasis or sleeping sickness is caused by a protozoa, Trypanosoma brucei, which is transmitted by the tsetse fly.

Rising temperatures can increase the number of tsetse fly vectors and rates of infection. Similarly, Rift Valley Fever, which is endemic to East and West Africa, is transmitted by mosquitoes Aedes and Culex, and outbreaks are linked to altered rainfall patterns due to changes in ENSO and La Niña events, and elevated Indian Ocean temperatures that cause heavy rainfall and flooding. Even Ebola that ravaged the continent and claimed over 11,000 lives between 2014 and 2016 in West Africa has links to climate change. The outbreaks coincided with dry seasons followed by heavy rainfall that produced an abundance of fruit. These fruits attract bats (the suspected carriers of the Ebola virus) and apes and provide opportunities for the disease to jump between species. Humans can contract the disease by eating or handling an infected animal.

Cholera, another climate sensitive disease, is prevalent in areas where sewers overflow after rainfall and contaminate drinking water. Clean water sources also may not be easily available in dry conditions and people are forced to consume water from contaminated sources. Climate change can worsen the situation. A December 2011 paper on Tanzania published in the International Journal of Environmental Research and Public Health found that 1°C rise in temperature increases cholera risk by 15 to 29 per cent. Based on climate change projections, by 2030, Tanzania may see a rise in costs associated with cholera equivalent to 1.4 per cent of GDP, the researchers say.

Heat stress is also a possible repercussion of climate change. Temperature increases in Tanzania are higher than the global average. In Sub-Saharan Africa, temperatures have increased by over 0.5°C or more during the past 50 to 100 years. Other than the direct impact on health, the increase in temperature is likely to lead to malnutrition. Yields of crops like maize and wheat are expected to go down due to high temperatures, suggest models. Major grains show yield losses in the range of 2.5 to 16 per cent for every 1°C increase in seasonal temperature. This has been observed across the Sahel, where rising temperatures have led to poor production of maize, sorghum and millet. High levels of carbon dioxide in the environment too can reduce the nutrients in crops.

Other than the cost to human health, these diseases also impact the country’s economy. The Ebola outbreak resulted in US $2.2 billion in GDP losses for Guinea, Liberia and Sierra Leone. It has often been pointed out that climate change can also reverse the gains made in controlling diseases. Regions with the triple combination of high exposure to climate change impacts, extensive poverty and dense populations will most probably face major adaptation challenges. Malawi, Mozambique, Zambia, Zimbabwe and the Lake Victoria region in East Africa are examples of places which will face these problems. However, most of these countries do not have adequate policies for adaptation. In most of the countries, the health components in the climate change adaptation plans are very weak.

To rectify this, WHO has worked with 34 countries to strengthen their resilience to the adverse effects of climate change by establishing multi-sectoral country task teams. A variety of initiatives have been taken in the region to address climate change. These include the Libreville Declaration and the WHO’s Adaptation to Climate Change in Africa Plan of Action for the Health Sector. WHO’s research has produced evidence in seven countries on how to increase resilience to diseases. They found that in dry land ecologies in Botswana, South Africa and Zimbabwe, community knowledge on the trends of malaria and schistosomiasis can help assess situation quickly. In Kenya, the researchers found that the community was not aware of Rift Valley Fever and this made them more vulnerable to outbreaks. To counter this, the researchers recommended that the veterinary department should set up sentinel herds of cattle which could be tested routinely to alert authorities.

To achieve these, robust environmental health data is of utmost importance to help African countries prepare for diseases emerging due to climate change. Though environmental health data exists in Africa, it is not always in a form that is immediately “user-friendly” in scientific research, says Caradee Wright, researcher with the Environment and Health Research Unit of the South African Medical Research Council, South Africa. “Evidence-based decision making should underpin all climate change and health mitigation and adaptation activities, policymaking and planning,” she says. The evidence, along with stakeholder engagement helped the South African Medical Research Council identify that there was a need for a heat-health action plan. Working across sectors in one of the hottest towns in South Africa, Rustenburg, researchers developed a heat-health action plan template for the government. This template can now be rolled out to all towns across the country to help them plan for extreme heat and periods of “very hot days” which are predicted to increase in the future, says Wright.

The usefulness of data has also been underlined in a March 1, 2018 report published in The Lancet. The researchers mapped cholera incidence in Sub Saharan Africa (excluding Djibouti and Eritrea) from 2010 to 2016 from data sets of WHO, Médecins Sans Frontières, ProMED, ReliefWeb, ministries of health and scientific literature. They found that in the study area, an average of 141,918 cholera cases were reported per year, but only 4 per cent of the districts had higher cholera incidence. They suggested that by focusing on these districts first, interventions could eliminate 50 per cent of the region’s cholera cases. Unfortunately, even now Africa might not have woken up to the immediacy of the problem. The first progress report of the chairperson of the commission on the African Center for Disease Control published in March 2018 does not even mention the risks due to climate change.

(This article was first published in the 16-31 May issue of Down To Earth).