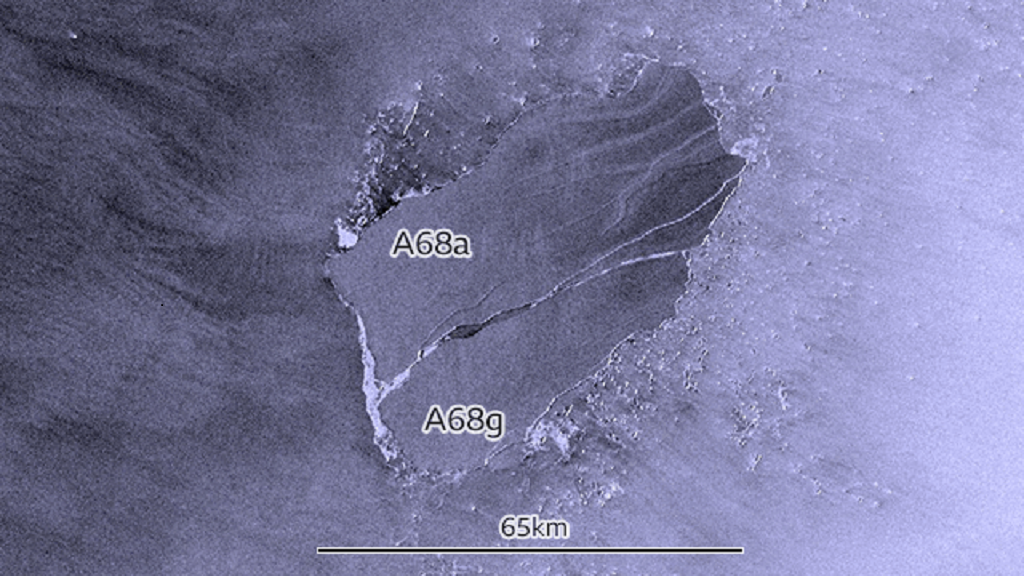 A major crack appeared in the Antarctic ice giant, A68a, once the world’s biggest iceberg, as captured in satellite images since January 25, 2021.

The iceberg had detached from the Larcen C ice shelf in 2017 and was travelling up towards the island of South Georgia in the British Overseas Territory, when turbulent sea currents diverted it towards to the South Atlantic Ocean.

The recent satellite footage captured a smaller slab, now called A68g, distinctly separated from the original iceberg but floating along it about 135 km off the south-eastern coast of South Georgia.

A68a, when it first broke off Antarctica, measured 5,800 square kilometres, almost triple the size of Delhi. It splintered and shed much of its mass since because of higher temperatures and rough sea currents. It still posed a threat to the little island of about the same size and home to penguins, seals and endangered blue whales.

Last November, when it was dangerously close to South Georgia and before it was veered towards the South Atlantic Ocean, scientists thought it would anchor itself to the island’s coast and destroy its thriving marine ecosystem.

A68g is not the first one to depart from the floating ice giant. In fact, as the suffix ‘g’ suggests, it is the sixth smaller chunk or ‘childberg’ to have calved from A68a since the last part of 2020. These city-sized ice masses that have drifted away from Antarctica, still threaten marine and coastal habitats, squishing small species under their weight or erasing the lands where their food grows.

The earth lost 28 trillion tonnes of ice between 1994 and 2017 of which 6.5 trillion tones were from Antarctic ice shelves, according to a report published in Cryosphere.

The phenomenon of ice sheets splitting up and melting could have long-term ramifications. The smaller chunks can melt away easily, raising the global sea level and setting off other environmental anomalies.