Kerala has been sweltering since the second week of February 2020, with temperatures 2-3 degrees Celsius (°C) above normal. Scientists blame climate change for this.

Rise in sea surface temperature, due to global warming, drove up humidity. This, in turn, pushed temperatures higher, according to Rajeevan Erikkulam, a meteorologist with a central government science institute in the state.

Rising sea surface temperature was pushing up temperatures on India’s coast,” he told this reporter.

“On February 17, 2020, Santa Cruz in Mumbai recorded 38.01 degrees Celsius, which was the highest in India. Kottayam and Kannur placed second and third,” Rajeevan said. Kannur is on the coast. But Kottayam is not, though it is not far from the sea and has a high humidity level.

“Eventually, these places will face severe heat,” Rajeevan said. He though predicted light rain for Southern Kerala on February 21, before the  temperatures rise again.

Global land and ocean surface temperature for January 2020 was the highest in 141 years, according to a report released on February 13 by the United States National Oceanic and Atmospheric Administration (NOAA)’s National Centers for Environmental Information.

January’s global average temperature rose 1.14°C above the 20th century average of 12°C, according to the NOAA.

The report also added that only March 2016, February 2016, and December 2015 had a greater temperature departure. All these months had a strong warm phase El Niño / Southern Oscillation (ENSO) present in tropical Pacific Ocean.

ENSO, which is a periodic fluctuation in sea surface temperature and air pressure of the overlying atmosphere across tropical Pacific Ocean, can influence global temperatures. 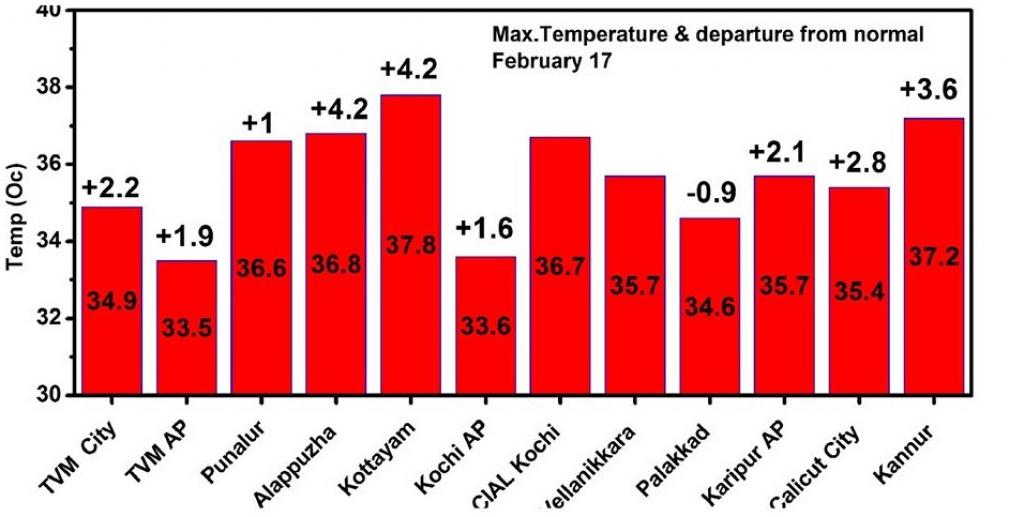 However, the report revealed that the January 2020 global land and ocean surface temperature departure from average was the highest for any month during ENSO neutral conditions, meaning El Niño or La Niña was not present in the tropical Pacific Ocean.

Between February 11 and February 18, 140 fire alerts were recorded in Kerala, according to the Forest Survey of India (FSI)’s SNPP-VIIRS satellite. A major wildfire in the Vadakkanchery forest range in Thrissur district of Kerala had killed three forest watchers on February 15. The victims have been identified as KU Divakaran (43), AK Velayudhan (54) and VA Shankaran (46).

The maximum temperature is most likely to be above normal by 2-3°C in Thiruvananthapuram, Alappuzha, Kottayam, Thrissur, Kozhikode, and Kannur, a notice published by the India Meteorological Department (IMD) on February 18, 2020, said.

The maximum temperature in Thiruvananthapuram will hover around 35°C till February 24 whereas the minimum temperature will range between 23°C and 24°C, the IMD forecast said.

“Thiruvananthapuram, Alappuzha, Kannur, Kasaragod, and Kottayam will face severe heat. The temperatures will be higher in these districts. Pregnant women, the elderly and children should avoid direct sunlight between 11 am and 3 pm. It is advisable to drink plenty of water to avoid dehydration,” Sekhar Lukose Kuriakose, a senior official at Kerala State Disaster Management Authority, told this reporter.