In several regions of the world, water scarcity will reduce the capacity to grow crops 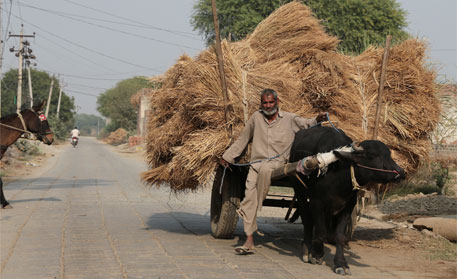 Global warming will have a profound impact on food production worldwide, leading to a reduction in the nutritional properties of some major crops, according to a new book.

The book, Climate Change and Food Systems, contains the findings of researchers, who have studied the impact of climate change on agriculture at both regional as well as global levels.

Threat to nutrition, health and water

The book underlines the potential impact climate change can have on health and nutrition. A higher concentration of carbon dioxide—the primary greenhouse gas emitted through human activities—lowers the amount of zinc, iron and protein and raises the starch and sugar content in wheat and rice.

The nutrition and health implications of this can be great, the book says. In India, where up to a third of the rural population is at risk of not meeting protein requirements, the higher protein deficit from non-legume food crops can have serious health consequences.

“As temperatures rise and water becomes scarce, wheat yields in developing countries are expected to fall by 13 per cent and rice by 15 per cent by 2050. The Consultative Group on International Agricultural Research (CGIAR) estimates that production of potato, banana and other cash crops will slump. Several studies points to a bleak scenario in the years ahead. However, other studies show that yields should be able to increase with more carbon dioxide available in the atmosphere (as it) would help to make more carbohydrates,” Devinder Sharma, a food and agriculture policy analyst, said.

Though this may be true, the combined effect of falling water tables and acute weather aberrations will surely lead to a decline in production, he added.

“In a country which is largely vegetarian, much of the protein intake is through pulses (and) non-legume crops. Any reduction in the nutritional levels in these crops is sure to hit the nutritional intake of the Indian population. Given the fact that India already has the largest population affected by malnutrition and under-nutrition, climate change will pose a much serious problem in the years to come,” Sharma said.

The book also shows how in several regions across the world, water scarcity due to climate change will reduce the capacity to produce food.

It cites recent research that has assessed the global impact of diet change on both irrigated and rain-fed water consumption patterns. Some results suggest that reducing animal products in diet offers the potential to save water resources to a large extent.

According to the authors, the global demand for agricultural commodities is increasing with the rise in population and income levels.

Agriculture depends on local weather conditions and is expected to be sensitive to climate change in the future, the book says.

Warmer, drier conditions near the equator are likely to reduce crop production while moderate warming may, at least for a short-term, benefit yields further away.

“Climate change is likely to exacerbate growing global inequality as the brunt of the negative climate effects is expected to fall on those countries that are least developed and most vulnerable,” said editor Aziz Elbehri of FAO’s Trade and Markets Division.

However, Sharma begs to differ here. “Although it is being projected that developing countries would be the worst hit, I think the worst impact would be on rich and developed countries. Several studies have shown that developed countries, especially in North America and parts of Europe, will become inhospitable. With the kind of epic drought being faced by California and Texas for the past three years, it is clearly being seen as a pointer to the disaster that awaits ahead,” he told Down To Earth.

The book cites studies that indicate that trade would probably expand under climate change—with flows increasing from mid to high latitudes towards low-latitude regions, where production and export potential would be reduced.

At the same time, more frequent extreme weather events, such as droughts and cyclones, can adversely impact trade by disrupting transportation, supply and logistics.

According to Sharma not enough is being done to lessen the harmful impact of climate change. “The G-20 Heads of State meeting in Brisbane in December 2014 ended with the usual rhetoric of boosting food and nutritional requirement and called for increased investments. The G-20 Food Security and Nutritional Framework does not look beyond helping small holders to mitigate the impact of climate change. What is required is to bring about systemic changes that move away from farming systems that led modern agriculture to become a villain of the story. According to CGIAR, agriculture is responsible for 41 per cent green house gas emissions,” he added.

The entire effort, so far, seems to be industry-driven with hardly any space for reinventing sustainable agro-ecological methods of farming. The G-20 needs to adopt the recommendations of the International Assessment of Agriculture Knowledge, Science and Technology for Development which calls for a radical change in the ‘business as usual’ approach, Sharma told Down To Earth.