Pakke river, which flows alongside Seijosa, got widened from a stream around 25 metres wide to one kilometre during the catastrophic flash floods of 2004. Photo: Sunny Gautam

Climate change plays out slightly different than usual — and strongly — in vulnerable areas such as a biodiversity-rich forest. The impacts may be felt for generations to come, some of which may be irreversible. They can be compounded by landscape changes due to human interventions, illegal or legal. Seijosa circle in Arunachal Pradesh’s Pakke-Kessang district has been witnessing such impacts for the past decade-and-a-half.

Seijosa, one of the five administrative divisions of the district, has a population of around 4,000 across 19 villages. It lies on the eastern end of the scenic Pakke Tiger Reserve forest and south of the Papum reserve forest of the Khellong forest division.

“I have seen the climate of Seijosa change drastically in the last 15 years or so. Earlier, the temperatures would become mild from July on, but now, we have high temperatures even during the winter months of December and January,” said Jorjo Tana Tara, an environmental activist. He is a resident of Seijosa from the local Nyishi community.

The Blythe’s Kingfisher, for instance, is found only at 15 places in the state, 13 of which are in Pakke. The bird is rarely seen these days because of decline in the population of fish it feeds on.

According to Tara, there has been a shift in the behaviour of animals and birds; a change in temperatures and rainfall patterns as well as deforestation could be a reason behind this. Loss of forest cover near the Saibun natural salt water lake has changed the migratory route of the elephants in the area that earlier used the spot as a resting place.

Precise data on the shifting patterns is elusive for the lack of credible research on the subject. The measurement infrastructure of the India Meteorological Department (IMD) got washed away in an intense flash flooding event in 2004 and has not been re-constructed since then.

While the global climate change may play a part in Seijosa’s sweltering temperatures, micro-climate changes due to massive changes in landscape, especially decline in forest cover, could have exacerbated the crisis.

Pakke Kesang has lost around 6,000 hectares of forests between 2000 and 2018, according to satellite imagery data from the National Aerospace and Space Administration (NASA).

According to the data, Arunachal Pradesh lost almost 3,200 square kilometres of forest area during the same time. The figure was around 2,000 sq km, according to data from Global Forest Watch (GFW). This is when the Forest Survey of India claimed a loss of only 486 sq km of forest area between 2003 and 2017, according to a research paper published in the journal Silva Fennica in June 2020 by researchers Chintan Sheth, Aparajita Dutta and Devathi Parashuram.

The 2004 floods washed away 200 ha of rice fields. Farmers now cultivate rice in only 10 ha of land near Darlong village. Photo: Sunny Gautam

The three studied forest loss in around 29 hornbill nesting sites in Papum reserve forest that falls under the buffer zone of Pakke Tiger Reserve. They found that between 2011 and 2019, there was 35 per cent loss of forest cover there.

“When forests are cleared on a large scale, the land is exposed to sunlight and gets heated much more quickly,” said MD Subash Chandran, professor of ecology at the Indian Institute of Science, Bengaluru. This begins a process akin to the urban heat island effect that changes the local wind patterns usually regulated by forest canopies to keep temperatures mild over forested regions.

Such impacts are also visible over the Western Ghats, another forest and biodiversity hotspot, according to Chandran. A study done on two forest-rich states of Malaysia and published in June 2020 “demonstrated that a decrease in the vegetation area led to an increase in the surface temperature.”

The study added that “the resultant forest change map would be helpful for forest management in terms of identifying highly vulnerable areas. Moreover, it could help the local government to formulate a land management plan.”

This exercise should be carried out for Pakke-Kessang as well, along with a monthly rainfall analysis to understand changing climate and the driving factors.

Micro-climate changes can also influence major weather systems like the monsoon winds in the area and this would be more visible in Arunachal Pradesh, where micro climates change frequently with geography, Chandran added.

While data for Seijosa or Pakke-Kessang district is difficult to get, the 30-year (1989-2018) rainfall analysis for East Kameng district carried out by the IMD has showed that during the south-west monsoon season, overall rainfall over the district decreased and the number of dry days increased.

Pakke-Kessang was carved off East Kameng district in 2018.

This has considerably changed the monsoon rainfall pattern of the region, which may have been partly driven by major landscape modifications. 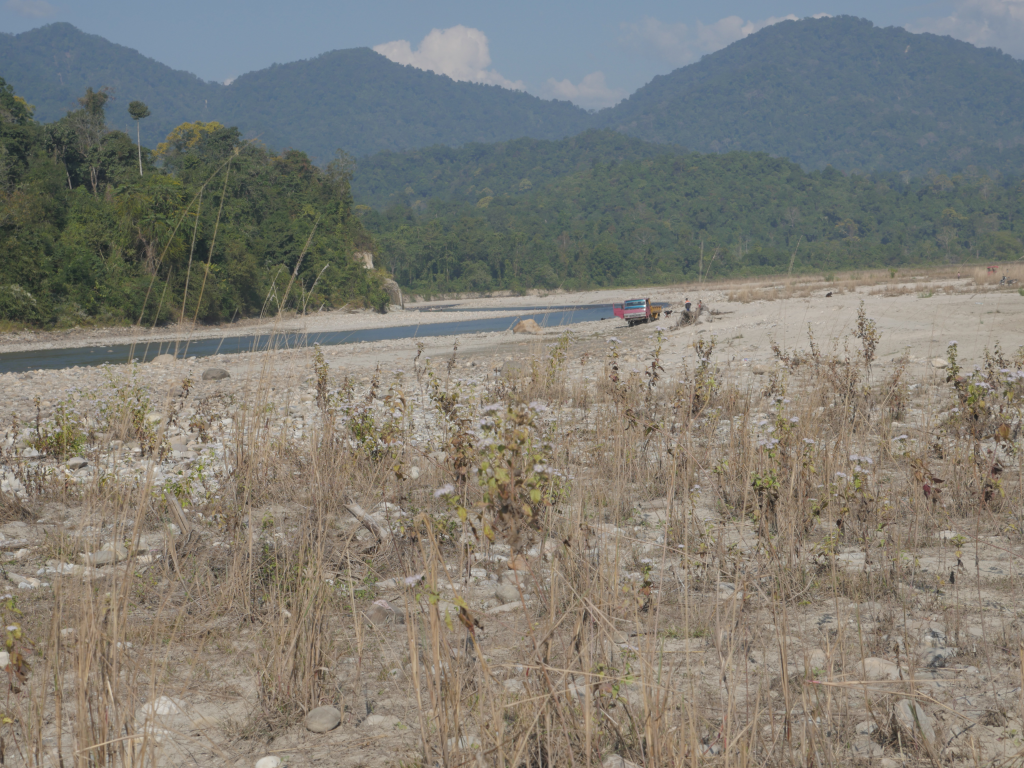 Boulder and sand mining along the river bed is rampant and unchecked, which disturbs the flow of Pakke river. Photo: Sunny Gautam

The landscape modification in Seijosa was initially triggered by flooding in 2004 of Pakke river, which flows alongside Seijosa. The flood laid waste to over 200 hectares of cropland where farmers mainly cultivated local varieties of rice. It caused a loss of Rs 100 crore to local people.

Currently, cultivation of rice is limited to only 10 hectares cultivated by only eight individuals, highlighting the long-term impact of extreme climate events such as high rainfall and flash floods. Even in the leftover cropped area, the productivity of rice has fallen.

“Earlier, a year of rice production would last us for two-three years. But now, that is not the case,” said Tara. He attributed it to acidification of the soils due to erosion, adding, however, that there was no way to ascertain it due to a lack of soil testing facility nearby.

People who lost their croplands now work as labourers in rubber plantations where they get paid Rs 300 a day; the pay has been stagnant for around three years.

The 2004 flood widened the river from a stream 25-30 metres wide to a one kilometre-wide river bed near Seijosa that now gets flooded whenever there is excess rainfall in area or upstream.

Human interventions in the forests — including unprecedented logging, sand and boulder mining in the area, road construction as well as plantations — have aided their deterioration and decline. The river bed, for example, has been disturbed by unabated sand and boulder mining. Down to Earth saw the activity being carried out using heavy earth moving machinery while travelling along the riverbed.

This was despite the ban on such machinery in forest areas by the divisional forest officer, Khellong. This was also when there is a state government designated quarry for mining purpose further upstream.

The designated quarry is not used to save money on transportation of mined materials. Sheth, Dutta and Parashuram stated in their paper: “We identify illegal logging (despite a ban by the Supreme Court of India) as the main driver that is depleting forest cover within this important area. Our results highlight the ongoing threats to biologically-rich forests and the need for urgent measures to halt this loss.”

“The ongoing deforestation appears to be due to organised crime, institutional inadequacy from a combination of limited resources, bureaucratic apathy and / or ambiguity in use and ownership of forest land compared to other community forests which appear to have robust governance systems.”

Tara has been protesting against illegal activities — especially logging and felling of forest trees — for the past few years, writing to various state and central authorities and urging them to take action. He has filed a petition in this regard with the National Green Tribunal (NGT), which is ongoing and being heard by a Bench of Justice P Wangdi and expert member Saibal Dasgupta.

In its latest January 6, 2021 order, the NGT found the response from the Arunachal Pradesh state government to be lackadaisical. It observed that “it is quite obvious that… all the actions are just proposals and nothing tangible appears to have resulted.”

“Specific directions passed by us in paragraph 4 of the order dated 09.11.2020 in taking up interim measures like induction of retired personnel of the Forest Department and the State Armed Police have not been complied with. The direction upon the State to take measures to make use of forest cover map prepared with the help of satellite imageries by the Forest Survey of India, Dehradun, of the affected districts (hotspots) to observe the change in forest cover occurring over a period of 10 years, has also not been complied with.”

In conclusion, the NGT directed the “state to place before us tangible actions taken in terms of the proposals and also to address all the directions contained in paragraph 4 of the order dated 09.11.2020.”

In its first order in August 2019, the NGT had ordered the state government to “take appropriate action to identify the hot spots where illegal felling of trees and deforestation is taking place”.

The hotspots were later identified by the forest department and were listed in the latest status report submitted by the principal chief conservator of forests (PCCF) of Arunachal Pradesh on December 31, 2020. They included: Bomdila, Khellong, Banderdewa, Pasighat, Namsai, Tezu, Jairampur, Changlang, Deomail and Roing.

In its January 6 order, the NGT noted that “it is quite heartening to note that hot spots of illegal logging have been identified and to prevent illegal logging and felling, range squads and divisional squads have been formed to be assisted by mobile squads under the supervision of the chief conservator of forests. It is informed that after the formation of the squads, there has been no report of illegal logging from the field thus far.”

“The assurance to the NGT from the PCCF saying illegal logging has stopped was not true. It has continued,” said Tara.

Tara said that the "forest department has made it difficult for him to move inside the forest reserve and has documents to prove it". According to him, they have placed restriction on his movement since December 2019 when he complained about his volunteers being mistreated at some places. He said he would move Supreme Court if the next NGT hearing February 19, 2021 doesn’t yield results.