Climate change is making livestock susceptible to diseases; here is how

There is also growing evidence that changes in rainfall pattern, frequent floods and droughts and intense heatwaves have substantial effects on transmission patterns of infectious diseases 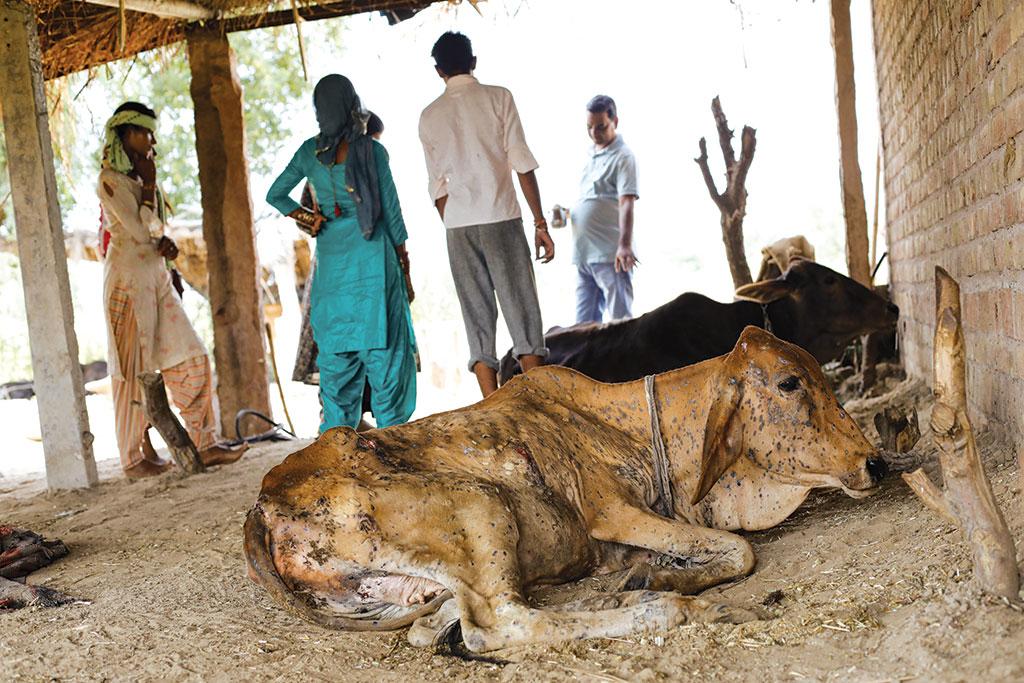 The most dangerous pathogens in human history have moved and evolved stealthily. It is particularly so for livestock diseases that often remain undiagnosed. In recent years, scientists see rapid changes in disease dynamics, with old and new pathogens continuing to emerge and spreading to previously “free” areas.

Habibar Rahman, regional representative for South Asia at the International Livestock Research Institute (ILRI), Nairobi, Kenya, tells Down To Earth that one of the reasons for the emergence of transboundary animal diseases is informal and illegal trade with other countries where the disease is already present.

In 2013, Porcine Reproductive and Respiratory Syndrome, a viral disease that affects pigs, entered India from China and Myanmar through porous borders of the Northeast. It was contained.

But soon, African swine fever followed the path. Rahman warns that MERS (Middle Eastern Respiratory Syndrome), a lethal viral infection in camels, has reached Pakistan. It can enter India as Rajasthan and Gujarat share a border with Pakistan and have high camel populations.

There is also growing evidence that changes in rainfall pattern, frequent floods and droughts and intense heatwaves in a warming world have substantial effects on transmission patterns of infectious diseases.

In 2014, International Center for Tropical Agriculture (CIAT), a research and development organisation, assessed the vulnerability of agricultural systems under different climate change scenarios in its submission to the UN Framework Convention on Climate Change.

It conducted a survey of veterinary authorities of the 54 African countries to understand important drivers of livestock diseases, and found climate change to be the major driver of disease dynamics, followed by trade in livestock products, human population growth and intensifying livestock.

The existing knowledge suggests that climate change impacts livestock diseases in two broad ways. One, directly because of heat stress, and two, indirectly, because of extreme weather events and their impact on disease-causing pathogens and vectors.

All animals have a thermal comfort zone which is beneficial to their physiological functions.

When the ambient environmental temperature exceeds the upper critical threshold, it leads to heat stress, metabolic disorder and immune suppression among the livestock, “resulting in an increased propensity for disease incidence and death,” write researchers with the Bangladesh Livestock Research Institute in Dhaka, an autonomous government research centre, in Open Veterinary Journal in May 2020.

For instance, write the researchers, chronic exposure to heat stress has been demonstrated to impair immune response in poultry and calf, hamper the efficacy of vaccinations and impair function of neutrophils that are important for defence against bacteria.

The immune suppression accelerates the chance of infections resulting in the potential for increased use of antimicrobials and an increase in antimicrobial resistance. 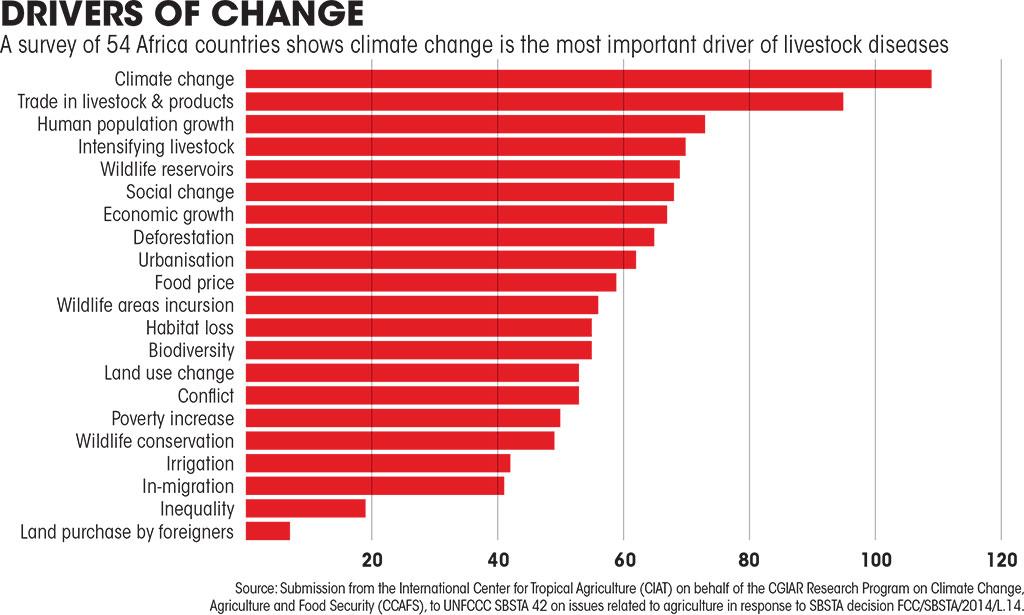 Studies also report that cases of mastitis, a major health problem in the dairy industry worldwide, increase during summer and have a significant correlation with heat stress due to suppressed immunity, thermal injury of the udder and spread of pathogens in the summer.

“Heat stress is definitely increasing in the last few years, with an increase in rainfall and subsequent rise in humidity,” says Jitender, veterinarian at the livestock research station, Beechwal, Rajasthan University of Veterinary and Animal Sciences.

“The normal temperature of a cow is 102.5oF. We have recorded cattle showing 107°F and 109°F, in which the thermometer stops showing the temperature,” he adds.

Humid conditions also lead to less heat dissipation among animals, managing which requires proper ventilation in sheds and enclosures. The animals do not survive such extreme conditions, Jitender says.

Some of the effects of climate change are less apparent, but have much greater impact on livestock disease transmission. In pastoral areas, for example, prolonged droughts trigger more frequent and long-distance movements which enhance contact between distinct populations of animals, exposing them to new disease agents.

A rise in temperature, precipitation intensity, flooding and humidity can also increase pathogens’ or vectors’ metabolic processes, reproductive rates, resulting in enhanced vector–pathogen–host contact and, therefore, the risk of disease.

Researchers with ILRI have analysed the impact of climate change on two crucial livestock diseases in Africa — Rift Valley fever and tick-borne diseases. In their book The Climate-Smart Agriculture Papers, published in 2018, they write that countries have reported outbreaks of Rift Valley fever, a mosquito-borne viral infection that causes increased abortion and perinatal mortality in sheep, goats, cattle, buffaloes and camels, after periods of above-normal precipitation.

Climate change is likely to expand Rift Valley fever’s geographical range due to expansion of the vector niches as the average rainfall in eastern Africa, including the Horn of Africa, is expected to increase, while that for southern Africa is likely to decline.

Similarly, the article predicts a change in the range of ticks, which harbour a wide range of livestock diseases endemic across various parts of the world.

It says tick-borne diseases would reduce in the western arid regions in Angola, southern Democratic Republic of the Congo and Namibia, given that these areas were already hot and dry and further increases in temperature would make them unsuitable under the future climate scenarios used.

On the contrary, some areas in Botswana, eastern Democratic Republic of the Congo, the northern and eastern cape provinces of South Africa and Zambia would become more suitable in the 2020s, due to increased rainfall and rise in minimum temperatures. A rise in temperature has the potential to expand the geographical range of 50 per cent tick species.

At higher temperatures, arthropod vectors like tick feed more regularly to sustain the increase in their metabolic functions, enhancing chances of infections being transmitted between hosts.

A 2020 ILRI report highlights that among 65 animal diseases identified as most important to poor people, 58 per cent are climate sensitive.

In India, apart from the mutation in lumpy skin disease virus, warm and humid weather could have also played a role in the recent surge in infection.

“In the last two months, the disease has spread like wildfire in Rajasthan,” says Sohan Lal from Urmul Setu Sansthan, a non-profit that works with cattle rearers in Bikaner.

In July this year, the state received 270 millimetres of rainfall — the highest for the month in nearly seven decades, according to the India Meteorological Department. In the last week on June, Bikaner saw 100 per cent deficit in rainfall.

In the first two weeks of July, it recorded excess rainfall of 247 per cent and 435 per cent. The excess trend continued till August in Bikaner and other districts. In villages, cases rose simultaneously after heavy bouts of rain, says Lal.

Infect stray cattle could have also facilitated spread of the vector-borne lumpy skin disease. In January 2021, when the diseases had just begun to tighten its grip over the country, DTE reporters had travelled to various states to track the spread of the virus.