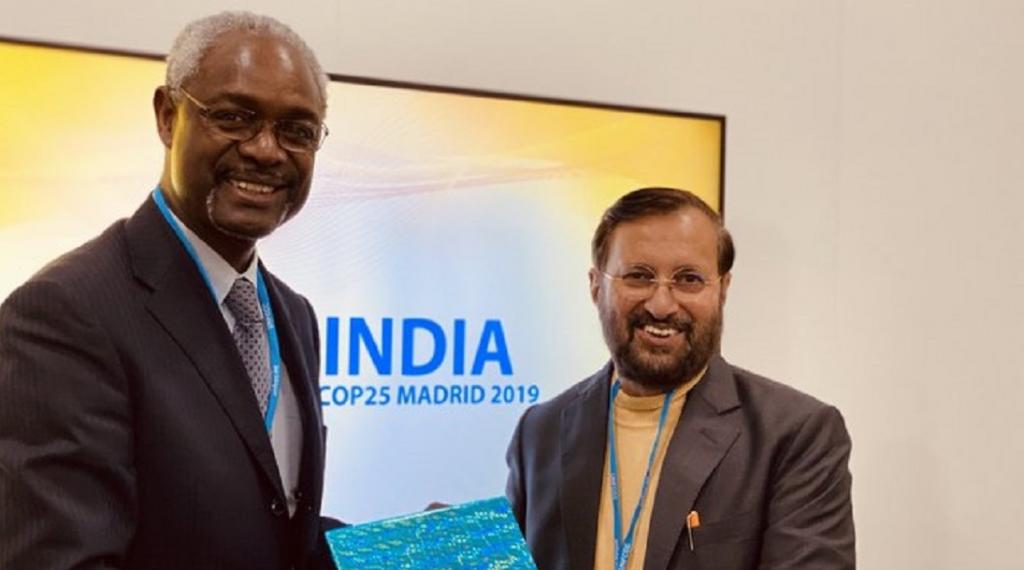 India on December 9 indicated at the conference of parties (COP 25) of the 2019 United Nations Framework Convention on Climate Change Conference that it had no plans to immediately pledge to cut more emission.

The country will like to concentrate wholly on the implementation of the Paris Agreement, said Union Minister for Environment, Forest And Climate Change Prakash Javarekar. He asked “not to broach new issues” when asked about being more ambitious in reducing greenhouse gas emission.

“It is futile to talk about new targets… new ambition unless we carry out Paris agreement,” he said adding that the world’s second-most populous country may revisit the emission targets during the Global Stock Take (GST) of emission in 2023.

Such an arrangement means emission would continue to be much more than the level prescribed by scientists and the high-intensity climatic impacts would continue.

Negotiators from China and South Africa earlier told this reporter that their countries too did not have ambitions to increase emission cuts immediately.

“It’s like the developed countries and the creamy layer of developing block have gone into an untold understanding that they are even not going to discuss the ambition rise issue in CoP 25 , set aside executing it,” said a climate negotiation analyst .

“First, scientists made it clear that we need to increase ambition about emission cut; then children led by Greta Thunberg gave a clarion call. Yet the politicians are refusing to budge from their narrow country-specific mindset,” Saleemul Haque, advisor of Least Developed Countries, told this reporter the same day. He added that the less-developed and vulnerable countries would talk about increased ambition and climate justice during the ministerial.

The European Union, however, may surprise by demanding more ambitious targets, a European expert said.

Several scientific reports published prior to or during the Madrid summit pointed out that unless countries increase significantly their Paris Agreement targets, the world will be hotter by at least 3 degree Celsius by the end of this century from the pre-industrialised.

Teen climate activist Thunberg who has repeatedly demanded that governments raise ambitions, led a historic climate march on the streets of Madrid with the demand.

Javadekar urged developed countries to walk the talk on their commitments under the Kyoto Protocol and even prepared to support an extension of the regime by two-three years. Such an arrangement, if agreed to by countries, can open up the possibility of the Paris Agreement and an extended Kyoto Protocol running simultaneously.

The minister emphasised on the need of developed countries to honour what was promised within Kyoto Protocol’s second commitment process. It has not been ratified as an adequate number of developed countries have not signed it yet. Thus, it is not legally binding and does not make it imperative for signatories to implement what they promised years ago.

Javadekar, however, reminded them about the historical emission cut commitments of developed countries and pointed out that India was not ready to forget the agenda though its scheduled closure was only a year away.

Several climate experts, however, feel that such an arrangement would add to the confusion and might lead to double accounting of emission cuts.

“India is trying to get value of the unsold few million certified emission reduction (CER) certificates, prepared under the clean development mechanism (CDM) of Kyoto but remained untraded due to very low carbon value in market … which will be only possible if the demand is generated under Kyoto protocol once it is extended,” a climate analyst said.

“The other option is to allow those CERs carrying forward to Paris regime, which is likely to be countered by most countries excepting Brazil and ‘like-minded developing countries’ such as China, Malaysia, Myanmar, Nepal, Pakistan, the Philippines among others.

“The entire system is geared up to initiate Paris emission cut regime. Though we accept there should be just and equitable solution to left over CERs, but this is not acceptable,” said Sanjay Vashist of Climate Action Network, South Asia.

“India is just posturing on Kyoto; Had it been serious it would not have signed Paris without taking the issue into cognizance. It’s like India trying to get in a bus which has long left,” another analyst said.

The first phase of the Kyoto Protocol, the only legally binding agreement on climate action the world had before the Paris Agreement, was adopted in 1997 to fight global warming by reducing greenhouse gases emission only by developed countries. It came into effect in 2005.

After the first set of commitments ended in 2012, a second set was agreed to for 2013-2020 during the Doha climate summit. Several countries, particularly from Europe, promised emission cut targets. But without ratification, it went to the back burner and the carbon market nosedived, keeping several billion emission trading certificates untraded.

Javadekar also said India was among the top five countries in implementing the Paris Agreement. Not only was the country on track but will “definitely overshoot” its target of reducing emission intensity by 30-35 per cent by 2030 from 2005 levels, he claimed and highlighted the progress in the solar sector.

“This new Indian position does not have any logic. If India demands value for their untraded CERs, which they can always demand, they should say that directly as carrying on with Kyoto, which is already in nearing expiry, will only complicate the matter,” an analyst said.