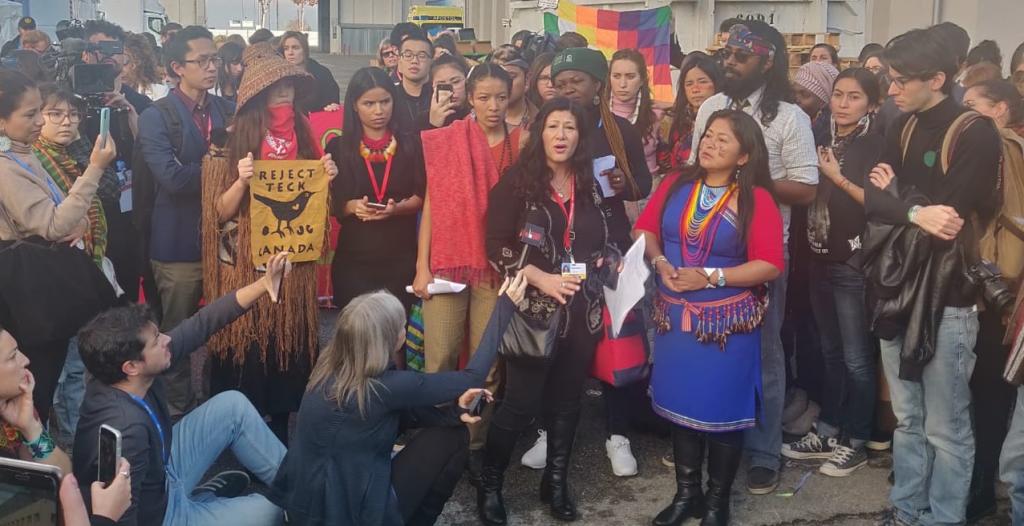 About 300 protesters were pushed out of the Conference of Parties 25 (CoP 25) conference hall Feria de Madrid for opposing slow progress in climate talks on December 11, 2019. However, another hundred-odd protesters forced their way into the plenary happening in Baker Hall, in the presence of United Nations Secretary General António Guterres and CoP 25 president Carolina Schmidt.

The protest, which started at about 2.30 pm Madrid time against the slow pace of negotiations particularly in the matter of raising ambition against emission cut, gathered momentum with most non-profits joining in. The protesters included young climate activists, indigenous people and women's groups among others.

Initially, the group was blocked by a posse of policemen from entering Hall 10, where the plenary was happening; but at about 3.15 pm, one group almost forced its way into the plenary, with policemen throwing a cordon around them.

However, another group, protesting at a different point, was forced to leave the conference site for staging the protest and were also debatched. Last heard, authorities were in talks with protesters to find modalities of allowing them back into the conference arena.

Since the political negotiations began on December 9, there has been no movement over key issues like developed countries raising their climate ambition, availability of finance in loss and damage and others.

Protesters have repeatedly pointed out the disconnect between the reality of climate change as well as the urgency to act being put forward by a series of scientific evidences; and the slow pace of negotiations without any structured talks about ambition raise. Earlier, young climate activist Greta Thunberg led a massive protest rally on the roads of Madrid, on the sidelines of the climate summit, alleging inaction by global leaders.

“We were protesting peacefully from about 2.30 pm. Then, around 3.30 pm, we were forced out and debatched by the authority. Now, we are outside, protesting against the security's shameful act in CoP 25,” Harjeet Singh, global head of ActionAid, told this reporter at about 5.30 pm.

In his speech, Secretary General Guterres reminded countries that time was running out and asked them to be more ambitious and make the world carbon neutral by 2050.