From living in a mud house to a fixed roof, this Malawian farmer knows the value of climate-smart agriculture

Grace Manda from Malawi never thought a climate-resilient method of farming could help her build a fixed roof, send her kids to school, that too from cultivating a hectare of unfertile land 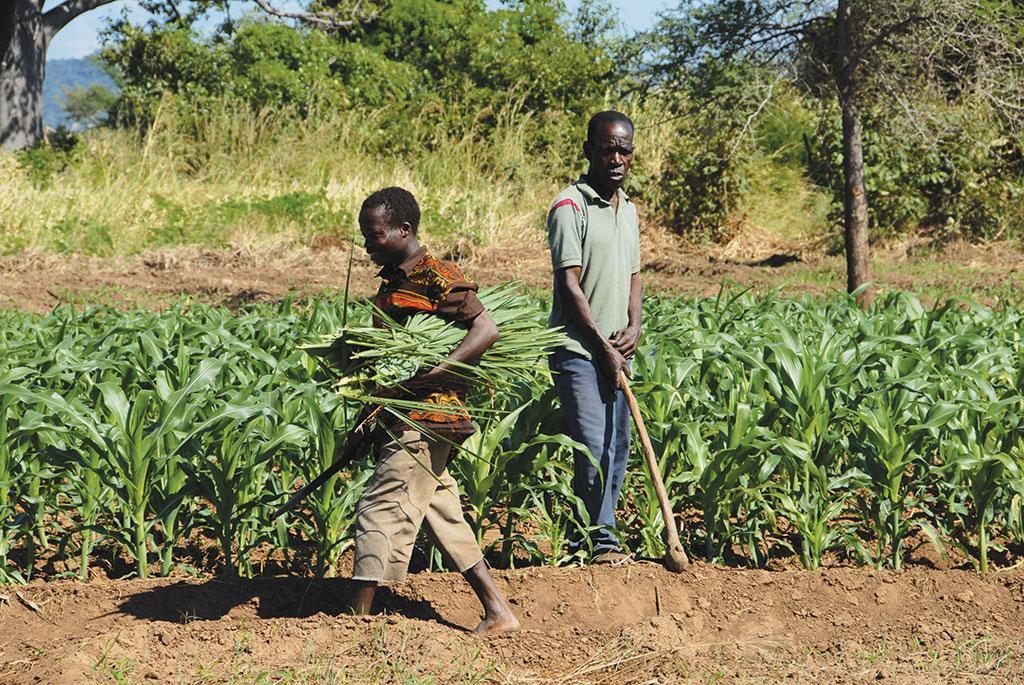 Conservation Agriculture is based on building and storage of soil organic matter by minimum mechanical soil disturbance and no tillage. Credit: Getty Images

Mother of three, Grace Manda—from the outskirts of Blantyre—Malawi’s commercial capital has lived part of her life complaining about high poverty levels.

Manda could not live a decent life, something that tormented her in terms of how to raise children and other family members. Food was also a challenge in her family.

She lives in Chilobwe, Blantyre, close to Chiradzulu District in the Southern Region of Malawi, one of the world’s most impoverished countries, ranking 170 out of 182 countries on the Human Development Index.

“I lacked food, clothes, school fees for my children and as if that was not enough, I lived in a house made of mud. It was terrible during the rainy season as grass-thatched houses often leak,” Manda told this reporter.

Unlike her colleagues, who belonged to farming associations, she never took farming as a tool that could transform her livelihood. Agriculture is one of the most important sectors in the economies of most nations, including Malawi.

“Poor rainfall in my area has contributed to my failure to regard farming as a business to tackle poverty," she says, adding that the land is not fertile to warrant good agricultural production.

Little did Manda know that having a small portion of unfertile land was no excuse for one not to engage in farming. There is a new method of farming promoted by the TerrAfrica Sustainable Land and Water Management partnership, which essentially sets guidelines for best practices in sustainable land man­agement (SLM) with an aim to disseminate them and create a framework for invest­ment in SLM in Sub-Saharan Africa.

It is called Conservation Agriculture  (CA) and has proven to be a best practice farming for the future. Popularly known by its acronym CA, it is “a concept for resource-saving agricultural crop production that strives to achieve acceptable profits together with high and sustained production levels while concurrently conserving the environment”.

The Food and Agricultural Organization (FAO) has determined that CA has three key principles (see box below) that producers (farmers) can proceed through in the process of CA. These three principles outline what conservationists and producers believe can be done to conserve what we use for a longer period of time.

In the field of CA, there are many benefits that both the producer and conservationist can obtain. CA can change the way humans produce food and energy. CA is also shown to have even higher yields and higher outputs than conventional agriculture once CA has been establish over long periods.

It remains the view of various agriculture organisations that if more produce is harvested, farmers would export surplus products since most African economies are agro-based.

Just one meeting on sustainable land and water management, including conservation agriculture, organised by the National Smallholder Farmers Association (Nasfam)—which she unwillingly attended—Manda's life was changed for the better.

First, Manda had to accept that she can use her one hectare piece of land to cultivate crops twice a year. Secondly, that although the land was not productive, she has to do conservation agriculture so as to make it fertile.

And with one hectare of land, today, Manda is a member of various associations since 2009 and a role model to most of the women farmers in Malawi. She has reaped the rewards through CA.

See a video on climate smart agriculture in Sikkim

Due to her farming prowess, she attends various trainings in making farming as business, climate smart agriculture, financing and market exploration for the betterment of members of her association.

Moreover, Manda has built herself a better house and is taking care of her elderly mother and can now afford her children's school fees.

“With the nature of my land, I had to realise that I have to promote conservation agriculture, we are doing soil cover and planting trees which adds more nutrients to the soil such as Nsangu,” Manda adds.

She grows maize, beans, and pigeon peas. “Considering the gravity of climate change, which has affected most farmers, I am also more into climate smart agriculture,” she said, adding that she sells her surplus maize and beans to buy fertiliser and lime and keep her family going.

Manda is one of the many farmers today in Malawi, who are championing conservation agriculture.

Recently also, Ines Malemia, a mother of three and member of the Farmers Union of Malawi (FUM) said she is also into conservation farming.

“I have 30 hectares of land in Mdeka, Blantyre where I grow pigeon peas. The land is friendly to such a crop unlike maize and beans. I intend to start growing cotton next season in Mangochi so that my business grows,” Malemia states.

For her, this is a holistic approach to agricultural production, based on enhancing natural soil biological regeneration processes involving improved soil organic matter management for the efficient use of precipitation, soil moisture and plant nutrients.

With Malawi government, allocating more financial resources towards the Agriculture Ministry during the current budget, both Malemia and Manda hope some funds will be used to champion CA and climate-smart agriculture.

Research done by the New Partnership for Africa's Development (NEPAD),  an economic development program of the African Union, shows that climate change effects are becoming more frequent and more severe, threatening the reliability and productivity of agriculture, exacerbating already extreme levels of poverty, and reinforcing persistent inequity and chronic under-nutrition.

Researchers however, said the challenge could be avoided through widespread adoption of more resilient, productive, sustainable, equitable and increasingly efficient farming practices.

This is why at the CAADP Africa Forum; NEPAD representatives reiterated the need for farmers to input on issues of climate smart agriculture and other pertinent issues on the Malabo Declaration, an implementation strategy and roadmap, submitted to African Heads of State and Governments in January 2015.