Communication gap: Bihar floods show why India, Nepal need to get their act together

The delay of sharing weather-related information is alarming because every time Nepal has received heavy rains, Bihar has recorded flash floods

Over 100 lives lost, 0.1 million displaced and 7.2 million people affected. That’s the human cost of the flood that deluged Bihar for close to two weeks this July.

Many lives could have been saved, losses averted, and people and livestock evacuated had the communities known beforehand that heavy rains were also lashing the Terai (lowland) region of the neighbouring Himalayan country, Nepal, and that the rivers flowing from across the border were in spate.

But weather-related information takes an average 48 hours to travel through the Indian and Nepalese bureaucratic circuit, say experts. And that’s way too long for a gushing river that can obliterate villages overnight.

Between July 7 and 13, heavy rainfall in Bihar caused flash floods in six districts. People started picking up their lives as the intensity of rainfall reduced by July 14.

But suddenly, the authorities of Koshi Barrage, located on the Kosi river just before it enters India, opened the floodgates. Though heavy rains in the state stopped by July 17, some 12 districts were declared flood-hit.

The delay of information sharing is alarming because every time Nepal has received heavy rains, Bihar has recorded flash floods. “In the recent past, this happened in 2008, 2011, 2013, 2015 and 2017,” says Narayan Gyawali of Lutheran World Relief (LWR) foundation, a non-profit that runs a community-based project in India and Nepal on early flood warning systems.

The two countries have a circuitous communication channel that means the information is either critically delayed or unclear, and of little use to most riverbank communities in down-stream Bihar. This is when the Nepal government has a dedicated Water and Energy Commission Secretariat for trans-boundary water issues, established way back in 1981.

Both the countries have also constituted a Joint Committee on Inundation and Flood Management.

Talking to Down To Earth, C K L Das, a member of the joint committee and chairperson of the Ganga Flood Control Commission, Patna, said the committee members do interact with communities that live in flood-prone areas in both the countries on a regular basis to assess their concerns and address those. But they do not issue flood warnings to communities as “there is no official requirement for us to do this”.

Just like Nepal, India too has a body, the Central Water Commission, which monitors floods in the country. But it looks only at the rivers and does not take into account the rainfall data for flood predictions.

“Though bringing together rainfall data and river monitoring to do better flood forecasting has been talked about by both the countries, there is no specific plan put in place for this to happen,” says Das.

Poor transborder information sharing has been a long standing problem for India. Last year, Arunachal Pradesh got flooded due to heavy rainfall in China. There are also fears that the ongoing rains in China might soon affect Assam, where 4.4 million people have already been affected by floods due to incessant rainfall.

“With the past political crisis during the Doklam standoff (the 2017 India China border standoff), the data sharing (between the two countries) has been limited,” says Giriraj Amarnath of the International Water Management Institute, a non-profit research organisation based in Colombo, which works on sustainable use of water and land resources. 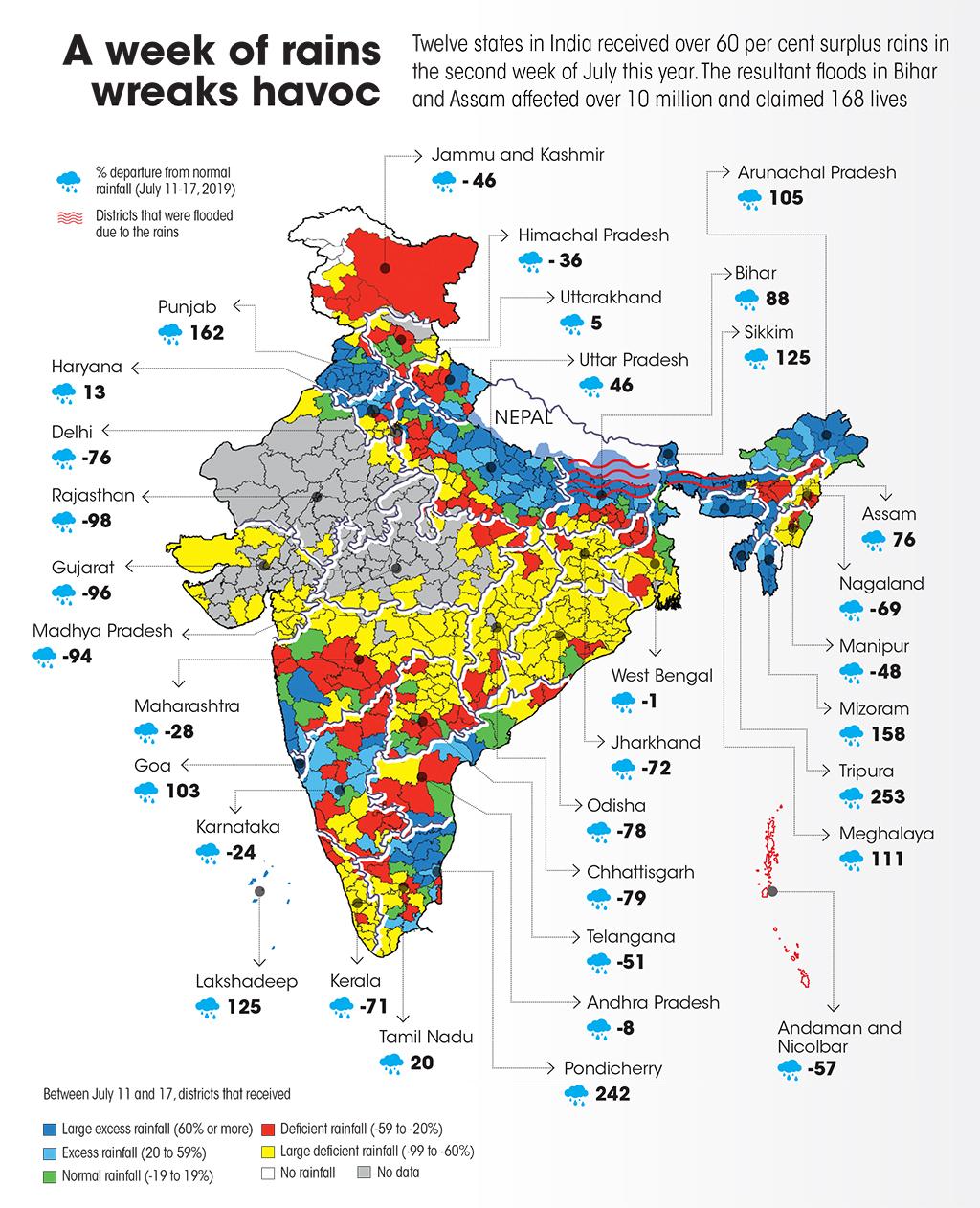 While the government has failed to create a system to warn the people, several community-level initiatives across India and Nepal are seamlessly sharing timely information. The people of Bihar’s Birpur village in Supaul district, for example, received a flood warning on July 13.

“I got a call from Nepal about the rising water levels in the Kosi. We immediately shifted our families and livestock to safer zones,” says Chandan Roy from the village which is just a few kilometres from the Indo-Nepal border. The village was drowned a day later when Koshi barrage was opened.

“We had zero casualties because of the timely warning. We even communicated the information to nearby communities,” says Roy, who is part of LWR’s transborder citizen forum, an initiative started in 2013 where comm unities across the border regularly meet to discuss flood mitigation measures. The non-profit claims that the initiative issued timely warnings to 48 communities in India that benefitted over 25,000 people in Supaul and Madhubani districts.

The upstream community generates the flood information using a low-cost transmitter-receiver unit and disseminates early warning to the communities. The transmitter is placed on the river bank, and the receiver is placed in a house of the nearest village.

The homeowner monitors the unit and disseminates information to communities, local government agencies, and other stakeholders through mobile messages and WhatsApp groups.

Transborder information sharing is imperative because the frequency of extreme rainfall events is on the rise.

“Some of the most sophisticated forecasts with climate change models suggest that as the globe warms, more rains will fall in the form of severe, intermittent storms rather than in the kind of gentle soaking showers that can sustain crops,” says a report in the journal Nature. This trend was at play in July.

Till July 7, as many as 27 of the 38 districts in Bihar recorded over 40 per cent deficit rainfall. Over the next week, seven of these rainfall-deficit districts were under flash floods. Nepal too was waiting for the onset of monsoons till July 10, when its Department of Hydro logy and Meteorology issued a sudden warning of floods in the next 20-36 hours.

Over the next 24 hours, mid and eastern parts of Nepal received the heaviest rains in the past 30 years. The long term (1981-2010) precipitation data of Nepal highlights that Terai regions are becoming more prone to high-intensity rainfall events than the highland regions, according to a research paper published in the journal Climate in January 2017.

Given the climate pressures, Amarnath says India should bring an economic focus to its transborder flood warning policies.

“India allows Bhutan to use the Brahmaputra to ship goods to Bangladesh. Such economic associations help establish effective warning systems across international borders.” Political will along with community-driven initiatives is an effective way to prepare for such floods, he adds.

(With inputs from Rajesh Ghimire in Nepal)