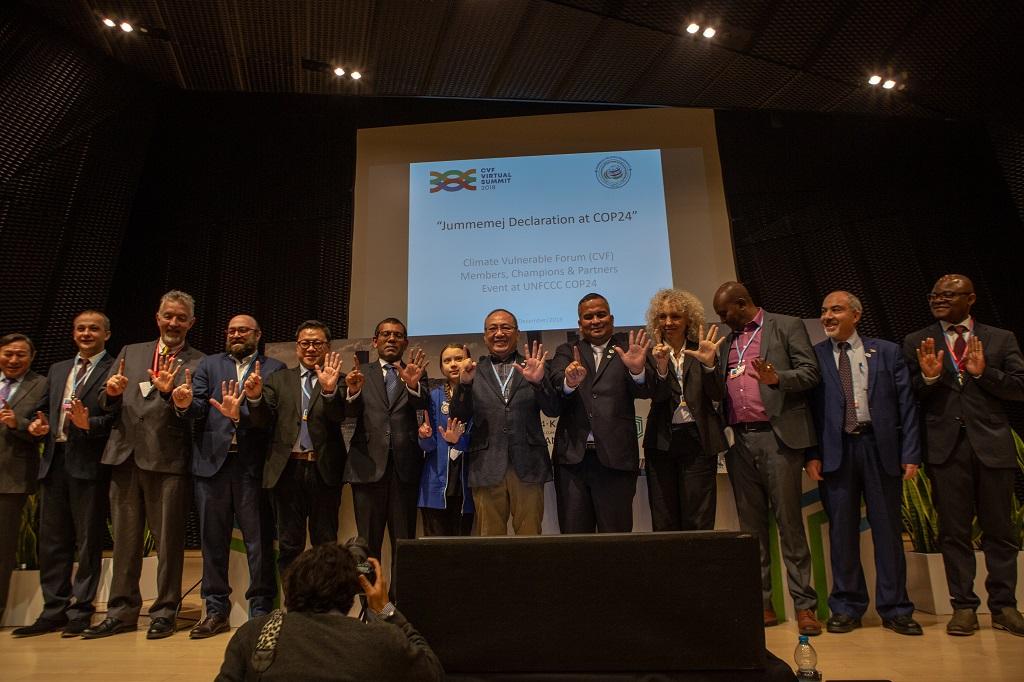 Climate vulnerable nations and supporters call for all countries to enhance climate declarations to protect the most vulnerable. Credit: David Tong / WWF-New Zealand

The question of finance has always been the major sticking point in climate negotiations. It is usually the last item to be resolved before any consensus decision is adopted by the Conference of the Parties (COP) to the UNFCCC. At Paris, developed countries agreed to provide US $100 billion of new and additional finance each year, by 2020, to developing countries. Ongoing negotiations in Katowice at the 24th COP offer an opportunity to review progress towards this goal and set new ones.

Last week, the Standing Committee of Finance submitted a report to the negotiators that estimated that $55 billion in climate finance was raised by developed countries in 2016. Not only is this short of where we need to be overall, the report also noted that only around a quarter of this amount went towards adaptation.

The Paris decision called for a balance between mitigation and adaptation in the provision of finance—this call is not being taken seriously thus far.

This week in Katowice, draft negotiating text emerged on the question of “long-term climate finance”. In theory, this should set new targets for climate finance beyond 2020. Since the estimates of the costs of climate action in developing countries are well beyond $100 billion a year (the cost of adaptation along is estimated at $140-300 billion annually), the new target would ideally be significantly scaled up.

Disappointingly, the text has no mention of any such new target. It confines itself to noting “progress” on the $100 billion target and urges developed countries to meet this goal. It does urge more public funds for adaptation, which is promising, but this is about as far as it goes in recognising the serious issues at the heart of financial debates.

The text’s ‘solution’ to the shortfall is to decide that there will be more technical workshops and ministerial consultations on long-term finance, without acknowledging that previous such efforts have not seen enough progress.

What is needed in this text is an acknowledgement that the primary problem is the budgetary processes in developed countries.

Politicians and bureaucrats in developed countries are not able to adequately convey to their domestic stakeholders the importance of earmarking climate finance to meet their Paris promises. This is why, during the recent debate within the Board of the Green Climate Fund regarding replenishing the Fund’s resources, there were repeated references to the concerns of tax-payers in developed countries.

The same policy-makers have so far been unable to create robust institutions which guarantee a predictable amount of finance for climate action in developing countries. Hence, a $3 billion promise on climate finance made under the Obama administration has been summarily broken by the Trump administration.

If negotiators want to take an indirect approach to scaling up finance, they should focus any future technical work or political consultation on the question of “strengthening budgetary processes and domestic enabling environments and policy frameworks in developed countries to raise new and additional climate finance to enable climate action in developing countries.” This should be allied to a new quantified goal for long-term finance.

Text on the other critical finance-related element of the ‘Katowice package’ – the rules regarding reporting on finance—is still awaited. The shortfalls have been covered in previous versions of the negotiating text. Resolving these will be crucial to determining how finance is accounted for—to prevent re-branding of pre-existing development finance as ‘climate finance’ and to properly distinguish between different financing instruments such as loans and grants, among other issues.

Discussions last week in Katowice were mostly conducted by technical domain experts. Over the past two days, there has been a transition to ministerial-level discussions, especially on the tough issues such as finance.

In addition, there is no shortage of high-level pressure – UN Secretary General Antonio Guterres told negotiators yesterday that “to waste this opportunity would compromise our last best chance to stop runaway climate change. It would not only be immoral, it would be suicidal”.

It remains to be seen whether this infusion of political presence will result in the accumulation of enough political capital to find consensus on this stubbornly irresolvable issue.