Countries will move forward on climate change even without Trump’s support: US envoy

According to Pershing, the momentum and power to effect change already exists 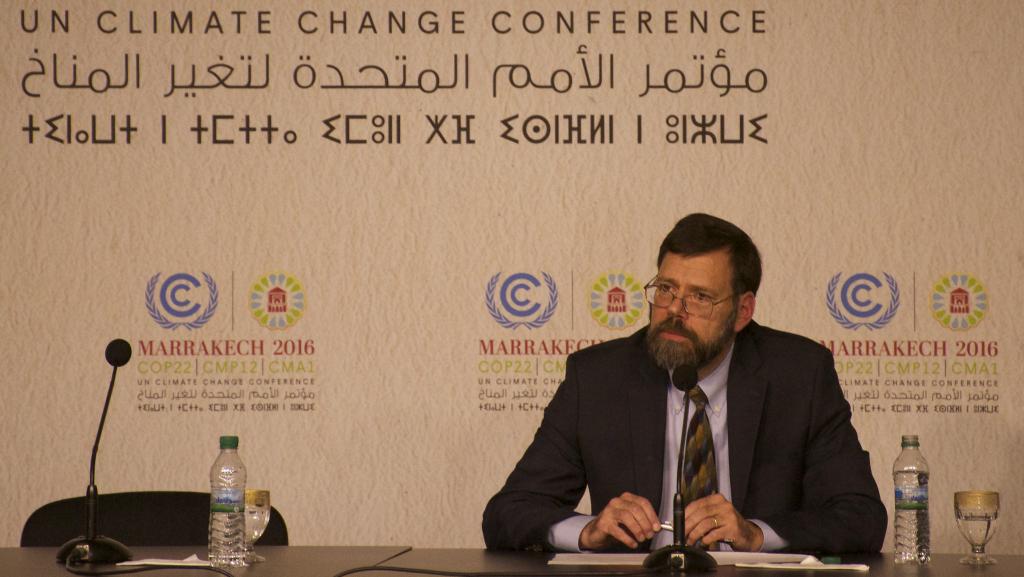 Pershing insisted that the Obama administration is keen on heightening its involvement in climate talks and action. Credit: US Govt/ Flicker

The election of Donald Trump to the highest public office in the US has cast a perceptible shadow on the ongoing COP22 climate negotiations in Marrakech. Speculation has been rife and rumblings have been growing louder in the corridors of the Bab Ighli village about the possible implications of the election of Trump on the climate negotiations and actions which the Obama administration has actively pursued.

While the US special envoy for climate change, Jonathan Pershing, addressed the media on Monday (November 14), presumably to allay fears regarding immediate implications, there is no clarity on the stand that the US would take on climate change under the Trump administration. Pershing insisted that in the immediate future, the Obama administration is keen on heightening its involvement in climate talks and action and help with the implementation of the Paris Agreement. Trump has repeatedly called climate change a hoax perpetuated by the Chinese and has vowed in the past to tear up the Paris Agreement.

Pershing, whose term as the US' special envoy ends when Obama's presidential tenure comes to an end in January 2017, opened the address by underlining the significance of early entry into force of the Paris Agreement and briefly mentioning the progress made so far in Marrakech. The interaction, however, quickly moved on to the implications of Trump's election, and Pershing remained resolutely non-committal towards what it could mean for  the Paris Agreement but emphasised that other countries which have had agreements with the US on climate change action are likely to move forward with or without support from the US.

"Countries form partnerships and agreements depending on their own needs. It is clear from talks with several countries, including China, the EU, Brazil, Mexico and others that countries will move forward even without the support of the incoming administration. The momentum and power to effect change already exists," said Pershing. There has been talk on the possibility that some nations such as France and China shall impose a "carbon border tax" on the US in the event of withdrawal from the agreement. "Heads of State can and will change but the effort against climate change is durable," he said further.

Pershing added that at this stage all talk of what will happen is premature and pure speculation as the transitional team for climate change has not yet been decided and no discussion between the outgoing and incoming teams has taken place so far.

On the possibility of withdrawal of the US from the Paris Agreement, Pershing offered a bit more perspective. "The Agreement has been drafted such that withdrawal from it would stretch out over five years. But the agreement does offer flexibility to parties on how to implement their NDCs and their achievement. The new administration might take advantage of this flexibility," said Pershing hinting that a probable strategy of  the Trump administration might just stand aside and not take any action to implement USA's NDC.

The special envoy's spin to Trump's election though fails to cut ice. The US remains the single largest carbon emitter in the world amounting to about a fifth of the world's carbon emissions. Historically, too, the US is responsible for over 20 of the cumulative carbon emissions since the beginning of the industrial era and remains the largest consumer in the world with little prospect of this changing, especially on a per-capita level.

Under such a scenario, a withdrawal from Paris Agreement of the US would be catastrophic for the prospects of forming a consensus on climate change. Even at the best case scenario (as it seems currently), if the Trump administration just does nothing, it still holds the risk of triggering a cascading effect where other countries pull out or do nothing as well. The first example of such a response may already be upon us as the Philippines, on Monday, reportedly refused to ratify the agreement. The risk of this trend growing becomes very real if the US fails to stand by its commitment.