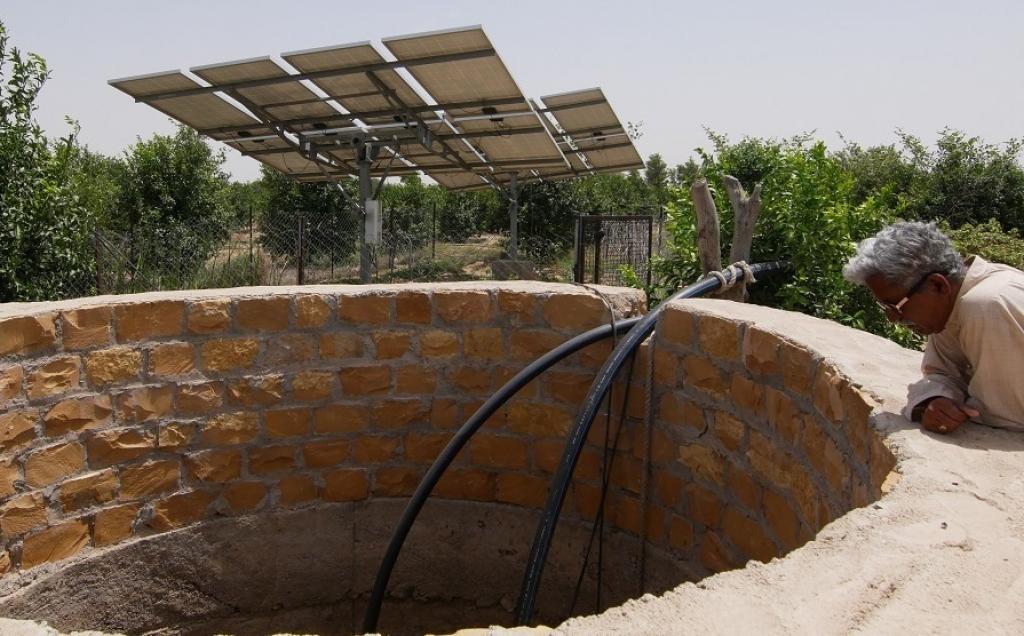 Farmers living along the 3,670 sq km command area of the Indira Gandhi Canal have managed to reverse desertification in large chunks of land in Jaisalmer, the farthest district from the canal's source. They have dug small ponds, locally known as diggies to store the canal water during summer.

Meheruddin of Chaidhani village has about five acres of land and the diggi he has dug is 135 feet on each side.

“We generally depend on the monsoon rains for our crops. I grow sesame and guar. But when the rains fail, like this year, we try to save some of the crops by using water from the diggi through drip irrigation,” he said.

Many farmers like Meheruddin have seen their fortunes change after the canal reached Jaisalmer. Sukhdev Singh, who works as a caretaker in the last village the canal supplies water to in the district, is trying to grow citrus fruits on a five-and-a-half hectare orchard.

He was hired because of his experience in farming using canal water in Sri Ganganagar. Singh relies on a pond created from the seepage of the well. He has more than 5,000 trees, which he irrigates using a drip system.

What’s common to Meheruddin's farm and Sukhdev Singh's orchard is that they look green despite being in an arid region, where the average rainfall is below 200 millimetres.

Increase in agricultural activity between 2003 and 2013 in Jaisalmer reversed soil erosion in about 1,967 square kilometres, an area 1.2 times the size of Delhi, showed the Land degradation and Desertification Atlas prepared by the Space Application Centre, Ahmedabad. This is almost 6 per cent of the total geographical area of the state.

Wind causes around 77 per cent of land degradation in Jaisalmer. In 2013, 93 per cent of the land was undergoing degradation as opposed to 98 per cent in 2003. Apart from the city area, most of Jaisalmer is made of sand dunes. Some are stabilised, but a lot of them are not.

During the summer months (May-July), high velocity winds move this sand as far as the Gangetic plains of Uttar Pradesh. Any vegetation on the ground helps arrest this movement.

“It is well known that the Indira Gandhi Canal increased agriculture along its command area. But the lesser known fact is that once the villages got electricity, they started setting up deep borewells near a set of villages called Lathi and Chandan in the Pokaran block,” said Santra.

“Most of Jaisalmer suffers from soil salinity and underground aquifers also contain saline water, but there are pockets with sweet water like Lathi and Chandan where farmers exploited groundwater to grow crops,” the scientist added.

Canal irrigation, which accounted for nearly 73 per cent of all irrigated land in 2007, fell to 61 per cent in 2016, with tubewells making up for the remaining 38 per cent.

Shelterbelt plantations was another reason behind this land stability. Shelterbelts have been planted all along the Indira Gandhi Canal, major highways and train tracks.

“These were to stabilise the sand dunes and stop the movement of sand. Native trees like Khejri, Acacia and in certain places Eucalyptus were also selected," said G Singh, principal scientists at the Arid Forest Research Institute.

The forest department by 2012 had planted about 38,000 kilometres of shelterbelts across the state.

While the green covers was increasing, experts warned that too much irrigation could reverse the gains. Part of the problem was most of the command area of the canal had high soil salinity. “While initially irrigation could work and push the soil down, after sometime the salt will start to come up to the surface and affect the plants,” said Santra.

“The other problem with the canal was of Prosopis juliflora (a type of mesquite),” said Singh. The canal water increased the infestation of this species, especially in areas where shelterbelts with native species were planted. This could prove to be problematic for farmers, he added.