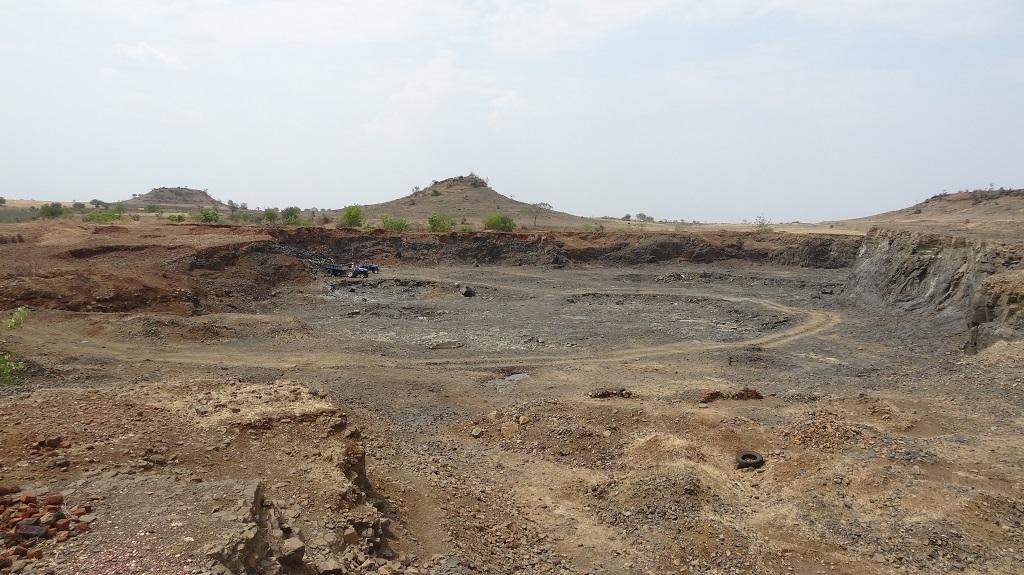 About 64.2 per cent of Dhule's area is under desertification or land degradation. Photo: Maharashtra Remote Sensing Applications Centre

Every year, during the monsoons, Hemant Waman Chowre, a 35-year-old farmer in Daregaon village in Maharashtra’s Dhule district, faces a peculiar problem. He wants the rains to come and water his crops, but he is also scared that even small amounts of rain can destroy the saplings.

Since Chowre’s 1.5 hectares (ha) of farmland sits on a gentle slope at the tail of the Shayadari range, the soil is shallow.

“It is about 6 inches deep,” he said. When the rains begin, the water rolls down the hill slopes and washes away the topsoil with the saplings from his farm.

“I had to plant twice in 2018. The first time it was soyabean. But when the saplings got washed away, I had to replant with bajra,” Chowre added.

Chowre’s is not a lone story of water eroding the topsoil and making farming next to impossible. In neighbouring village, Vardharne, Vilas Rajaram Gowli, points to a hole on the ground, on the periphery of his farm plot. The hole resembles a fox’s burrow.

“When it rains heavily, we have holes like this in almost every farm plot,” said Gowli.

“We have got only 10 per cent of our average rainfall this season and one can see holes everywhere. By the end of the rainy season all the top soil will be gone,” he added.

Dhule is one of the land degradation hotspots in India. The Desertification and Land Degradation Atlas published by the Indian Space Research Organisation’s Space Application Centre in Ahmedabad placed it at number 9 in the list of worst-affected districts.

About 64.2 per cent of its area is under desertification or land degradation.  In Maharashtra, two other districts find place in this atlas — Ahmednagar (56.5 per cent) and Sangli 46 per cent).

Dhule’s curse is that most its soil layer is similar to the soil found in Chowre’s and Gowli’s farmlands.

MS Mahajan, an agronomist at the Dhule Krishi Vigyan Kendra, explains that a major part of the district falls in what is known as the Deccan Trap, mostly made of igneous rocks or rocks made of volcanic magma millions of years ago.

“The top soil in these areas is generally shallow, about 9 inches deep. This shallow soil with little permeability makes up more than 60 per cent,” said Mahajan.

Most of this land supports either no agriculture or just one rainfed crop a year. The vegetation here is extremely thin. In the ISRO atlas, most of this is referred to as land with scrub vegetation.

The area marked under this category in the atlas is almost 1,91,356 ha or 26 per cent of Dhule’s total geographical area. Almost 94 per cent of the area under scrub vegetation is facing severe degradation while remaining has been indexed under slight and moderate degradation.

Nagpur-based Maharashtra Remote Sensing Application Centre carried out satellite mapping and ground verification of Dhule district. Water erosion, especially due to heavy rainfall events, was responsible for erosion of the top soil, said Prashant Rajenkar, associate scientist at the centre and part of this study team.

“There is very little vegetation that can hold the soil together and with rains coming in extreme bursts, soil erosion is bound to happen,” he said. Most of the erosion in this region is sheet erosion, or when rainfall gradually wears out the topsoil layer. Water erosion affects 23.75 per cent of the district’s land area.

About 28 per cent of the Dhule’s 7,195 square kilometres geographical area is under the forest department, according to data of Maharashtra Forest Department. But according to the 2017 India’s State of the Forest report, published by the Forest Survey of India, only 308 sq km or 4.2 per cent has a forest canopy.

There is no dense forest in the state. Even moderately dense forest is limited to just 69 sq km in the northern fringes of the district covered by the Satpura range. An additional 108 sq km is marked as scrublands.

The pressure on these little patches of forests is tremendous, said a senior forest official. Overgrazing, collection of firewood, illegal felling of timber and forest fires are causes of concern here, added the official.

“These forests support about a million cows, buffalos, sheep and goat. The buffalo population in the region increased by 15 times to more than a lakh in 2011 from 6,000 in 2003,” said the forest official.

Moreover, every summer, grazers set these forests on fire so that after the rains arrive, the land is filled with tender and succulent grass.  The ground is also burned for cleaning before Mohua collection, a tree that is found in plenty here. Tendu contractors also set forests to fire for better regeneration of leaves.

But an additional 2.6 lakh trees were also cut illicitly, said the forest official. “Between 2008 and 2010, the illicitly cut trees outnumbered the legally cut trees,” he added.

The problem in Dhule is that both abiotic and biotic pressures have not allowed new forests to generate. Forest fires have made the existing stock of trees hollow and unhealthy and have stopped new seeds from germinating. There is not enough stock to keep up with the pressures of grazing and firewood collection.

All this has meant that the rate of soil erosion is extremely high in certain pockets of Dhule district.  Bhoomi, a satellite map-based application developed by Nagpur-based National Soil Survey and Land Use Planning that quantifies erosion, paints a dismal picture of Dhule.

Most parts of the district, except for the areas around the Satpuda range, show moderate to very severe erosion. In certain parts of Dhule district, like the Sakri tehsil, the erosion is indexed between severe to extremely severe, the land loosing anything between 20 tonnes per hectare per year (t/ha/year) to over 80 t/ha/year.

The only way to stop this erosion is by regenerating the forest using soil and water conservation measures, said Marcella D’Souza, executive director, at Watershed Organisation Trust, a non-profit working on water and soil conservation in drought prone areas of Maharasthra.

“One has to understand that soil and water conservation go hand in hand. One cannot save one without saving the other,” she said.