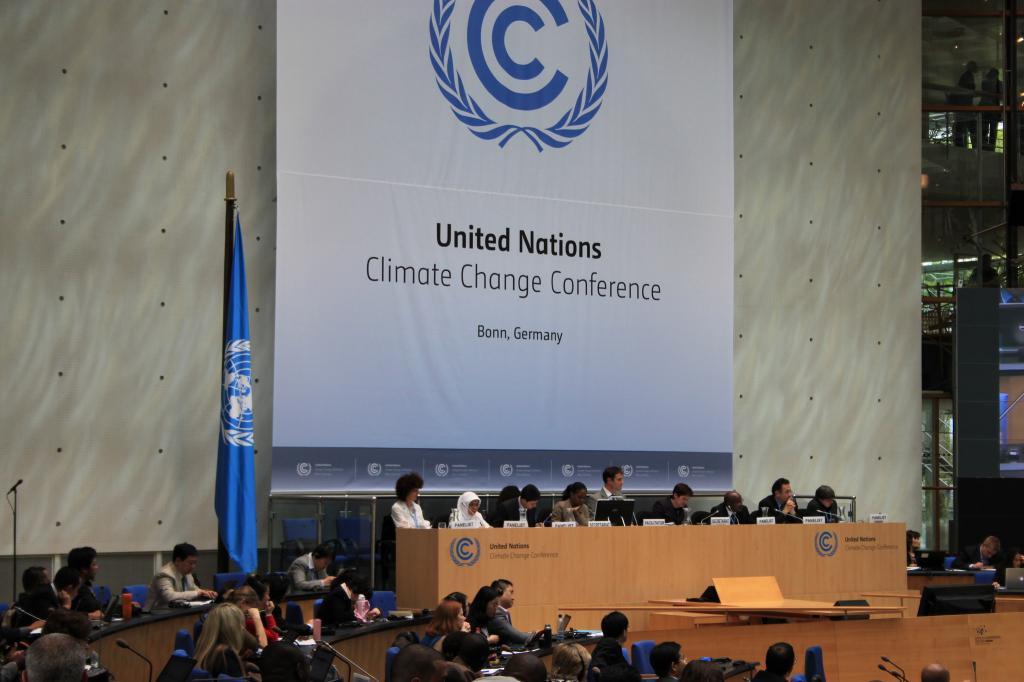 World shifted its attention to what must be done beyond 2020, leaving deliberations on more immediate actions on the back burner. Credit: Adopt A Negotiator/ Flickr

UPDATE: The closing plenary of the first week of COP just concluded. The decision on including pre-2020 actions and the role of non-state actors, including civil society and private businesses in the implementation of the Paris Agreement was taken. However, the chairs overseeing negotiations announced that no consensus was reached during the first week, although some progress was reported in the consultations and negotiations. The result has been non-inclusion of the two items to the agenda for the COP23 for the time being, although further talks have been proposed and tabled. Developing countries stressed on the importance of including pre-2020 agenda in keeping the trust required to successfully roll out the Paris Agreement.

The 23rd session of the Conference of Parties (CoP23) commenced on Monday (November 6) in the German city of Bonn. While the world focuses on preparing the rule book for implementation of the Paris Agreement, due in 2018, members from the umbrella group of Like-Minded Developing Countries (LMDC), including India, China and Iran took the floor at the opening plenary to raise the issue of vast inadequacy of climate actions in the run up to 2020 when the Paris Agreement becomes operative.

India’s key negotiator at the talks, Union Minister Ravi Shankar Prasad stressed on the importance of meeting commitments made for the period until 2020 on which there has so far been little progress. India’s stance was met with enthusiastic support by negotiators from other developing countries. "While action on post-2020 period under the Paris Agreement has gained momentum, the discussions on pre-2020 actions have lagged behind," he said. Although Switzerland, representing the a few developed nations under the Environmental Integrity Group, also supported the LMDC in pushing for greater pre-2020 actions, the demand was met with silence from other developed nations.

The commitments being referred to by developing nations are the ones made by parties of the UNFCCC before the Paris Agreement took form, when discussions revolved around the path to be taken until 2020. The first wide-ambit agreement reached under the UNFCCC in 1997 was the Kyoto Protocol which had a total of 192 signatories. The agreement during the first commitment period, in effect until 2012, was for developed nations to reduce their carbon emissions while developing nations were to switch to low-carbon technologies and climate change mitigation strategies.

In 2010, at COP16 in Cancun, close to 80 developed and developing countries announced their intentions to cut down emissions and reduce emission intensities respectively. This moment probably represents the last collaborative effort towards arriving at a mechanism of addressing climate change before 2020. Following the articulations at Cancun, the Kyoto Protocol was extended in 2012 under the Doha Amendment which was put in place to ratchet up commitments on emissions reductions and close the already widening emissions gap.

Beyond this, the world shifted its attention to what must be done beyond 2020, leaving deliberations on more immediate actions on the backburner. The Paris Agreement no longer differentiated between developed and developing countries on the basis of historical responsibility, effectively putting the entire world on a single platform, with each country deciding domestic actions it intended to take up to reduce the emissions gap required to keep the global warming ideally under 1.5 degrees Celsius and under 2°C at the very least.

The Doha Amendment, meanwhile, has been relegated to little more than quickly dissipating intentions. "It is high time now for developed countries to keep their word on pre-2020 actions. If not now, when? Before we can address what needs to happen beyond 2020, this is an urgent matter at hand that has a bearing on how the world can move forward in achieving its goals stated in the Paris Agreement," Prasad told Down To Earth at COP.

Doha Amendment in a limbo

So, the outpouring of support for scaling up these actions is understandable and evidently needed. As 2017 draws to a close, one can't help wondering if this is too little too late, especially since the Doha Amendment seems to be going nowhere. Less than 60 per cent of the 144 required ratifications of the amendment have been reached so far—five years after the agreement was tabled. In fact, the demand for augmenting this agenda seems to fall flat, considering that even among LMDC countries, only around half of the 20-odd members have ratified the treaty.

Even India, a vocal proponent of pre-2020 action over the past couple of COPs, ratified the amendment only in August this year. Similarly, Venezuela and Iran, both the countries that argued for immediate action, are yet to submit their instruments of ratification. When this is the state of affairs among developing nations which do not have to take up any emission reductions, one can only guess the level of seriousness with which developed countries view the commitments made under the agreement, making it an unlikely subject on which any progress will be made at this year's summit, three years from the end of the amendment's timeframe.

While the US did not sign the Doha Amendment, it is entirely plausible that the escalation of the issue this time round is fuelled by its withdrawal from the Paris Agreement announced earlier this year by President Donald Trump.

Although members across various negotiating groups and representatives of the UNFCCC secretariat have almost desperately maintained that the withdrawal will have no impact on the future of climate negotiations, sources close to  the negotiations have claimed that members are actively mulling over options for moving forward without one of  the largest emitters on board, especially in light of the emissions gap report, which pointed out that even if all the pledges made as part of the national climate action plans under the Paris Agreement were implemented, the world would still be set for a 3°C rise in temperature.

The US pull out of the agreement has brought into focus some pertinent issues: can countries be trusted to keep their commitments? How to hold them accountable to non-legally binding agreements?

While it may be too late to expect any meaningful pre-2020 measures, a failure to recognise its importance in the context of the current geopolitical environment could spell doom for negotiations moving into the Paris Agreement era.

On November 11, it will be clear whether or not pre-2020 action will be included in the agenda for the high-level negotiations at COP23 beginning next week