Did you know this monsoon was the first on a new calendar? Here’s why we needed one

Knowing exact dates of monsoon’s onset, progress and withdrawal is critical for farmers growing kharif crops, given the season is changing due to global warming

The southwest monsoon, critical for crops like paddy, is changing due to global warming. Photo: Wikimedia Commons

After a happening season, the southwest monsoon started to withdraw from India September 28, 2020. That’s known by now as is the fact that the rains are bidding adieu later than ‘usual’. But by how long?

Had it been even last year, it would have been a delay of nearly four weeks; but not this time — only 11 days here. Why? Because India’s revised monsoon calendar has dragged down the start of withdrawal to September 17 from the earlier September 1.

Yes, India has moved onto a new monsoon almanac — the first change since the older one came into existence in the 1950s. The raison d’etre: It would capture the changing stance of the one season that drives the lion’s share of the subcontinent’s economy.

“The present normal monsoon onset and withdrawal dates are based on records of only a few stations (149 stations) during the period 1901-1940,” the IMD had said in a press release in April this year.

The advance of the southwest monsoon in 2020 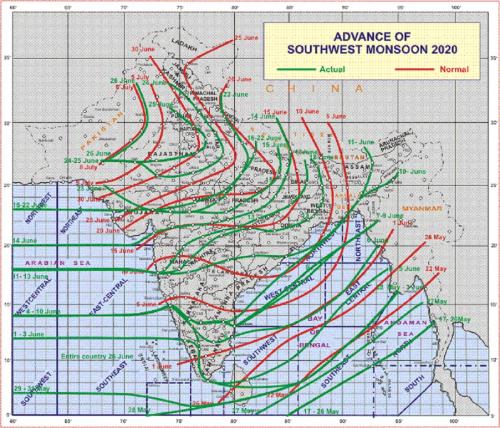 Monsoon withdrawal begins in northwest India, where the onset of the season is also the last. If one follows the IMD’s old monsoon calendar, the withdrawal is late by 28 days.

The normal and actual dates of monsoon withdrawal are closer than before. This means the IMD’s revised calendar is a bit more accurate though there still were some quirks in the monsoon season dates this year.

The onset of the monsoon over northwest India was early by 12 days. The new normal date of onset is July 8 while the actual onset this year was on June 26.

The rate of progress of the monsoon winds was in keeping with the new calendar till they reached central India, after which they stalled for a while.

After this lull between June 15 and June 22, the winds quickened their pace and covered the rest of the country (mainly northern and northwestern parts) in four days.

The withdrawal of the southwest monsoon in 2020 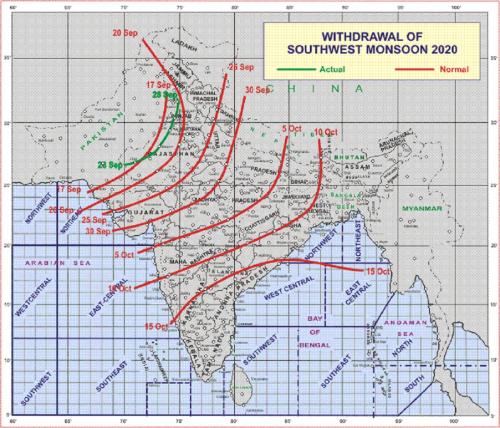 The early progress of the monsoon over southern peninsular India was also aided by the development and movement of severe Cyclone Nisarga over the Arabian Sea in early June, which might not be the case every year.

Though there have been two June cyclones in two years, the development of a cyclone coinciding with the onset and progress of the monsoon is rare, according to data from the IMD. There have been only six cyclonic storms in the month of June in the last 20 years, all of them in the Arabian Sea.

The acknowledgement of change in the monsoon’s onset, progress and withdrawal by IMD is a major indication of how India’s primary rainy season is changing its character, mainly owing to global warming.

Both, 2019 and 2020, have witnessed a late start to the withdrawal of the monsoon, even taking into account the changes in the calendar by IMD. This was also accompanied by heavy rainfall in the later part of the season in some regions of the country.

This acquires special significance when the impact of the southwest monsoon season on India is taken into account. The season brings in 70 per cent of the annual rainfall received by the country and is responsible for the production of major kharif crops.

This is because 51 per cent of farmlands in India are still rain-fed and 40 per cent of food production of the country comes from these farmlands, according to the Union Ministry of Agriculture and Farmers’ Welfare.

Accurate onset dates of the monsoon are crucial information for farmers as they help them decide when to start preparation for sowing their crops.

If the crops are sowed in time, with decent rainfall, the chances of increased productivity go up and this aspect has ripple effects on the rest of the rural and even the urban economy.