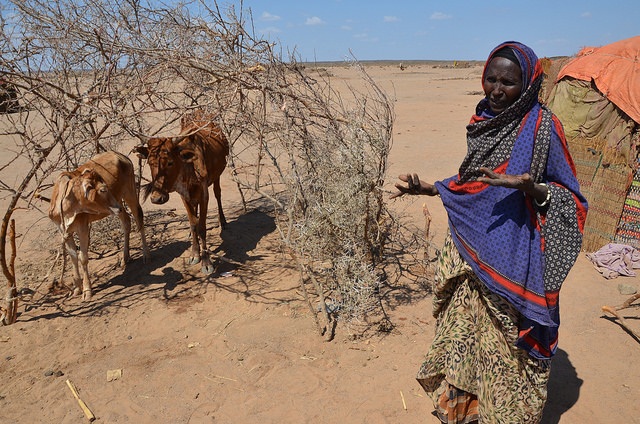 To tackle the situation, the United Nations food agency presented its emergency response plan to urgently protect livestock and rebuild crop production in the country.

“The outlook for 2016 is very grim,” Amadou Allahoury, the FAO representative for Ethiopia, said. “After two consecutive seasons of failed crops, the success of the main cropping season that starts now will be critical to preventing conditions from worsening.”

Earlier, a special alert was released by the FAO’s Global Information and Early Warning System that warned the prevailing El Niño will push up food prices and affect livestock production in Southern Africa. Low rainfall and increased temperatures will lead to reduced agricultural output. (Also read)

El Niño is associated with the abnormal warming of sea-surface temperature in the Pacific Ocean that has severe effects on global weather. While it leads to scanty rainfall and drought in some regions of the world, in others heavy rainfall and floods are common.

Currently, crop production in Ethiopia has dropped by 50 to 90 per cent in some regions and failed completely in the eastern part of the country. The drought has resulted in the loss of hundreds of thousands of livestock.

According to the FAO report, households dependent on crop and vegetable production have lost their main source of income and food as well their ability to plant during the next agricultural season.

Two failed agricultural seasons have reduced the availability of seeds as households attempted to plant their fields two to three times in the hope that the belg and kiremt (two yearly rainy seasons) would return.

Access to pasture and water will continue to deteriorate until the start of the next rainy season in March. Experts are anticipating that livestock will become leaner, sicker and produce less milk and many more will die.

At present, crop reserves are severely depleted, leaving farmers vulnerable without means of production for the upcoming planting season that starts in January.

Malnutrition rates have soared and the number of admissions for severe acute malnutrition among children is now the highest ever reported.

FAO aims to assist 1.8 million farmers and livestock keepers in 2016 to reduce food gaps and restore agricultural production and income.

The UN agency is also supporting 10,000 seed producers to produce high-quality seeds and get the local market for seeds back on its feet.

“In Ethiopia, El Niño is not just a food crisis—it’s above all a livelihood crisis. And, we need to intervene now to protect and rebuild these livelihoods and people’s capacity to produce, to prevent families from becoming long-term dependent on food aid,” said Dominique Burgeon, leader of FAO’s Strategic Programme on Resilience and Director of FAO’s Emergencies and Rehabilitation Division.

Elsewhere in African, El Niño has lowered crop prospects and many countries in the region are taking measures. South Africa has already declared drought status for five provinces while Lesotho has issued a drought-mitigation plan. Swaziland has implemented water restrictions as reservoir levels have become low.

To address the El Niño phenomenon globally, FAO is implementing response plans in 20 high-priority countries in Africa, Asia, Latin America and the Caribbean, and the South Pacific, including Ethiopia. Another 21 countries are being monitored closely.