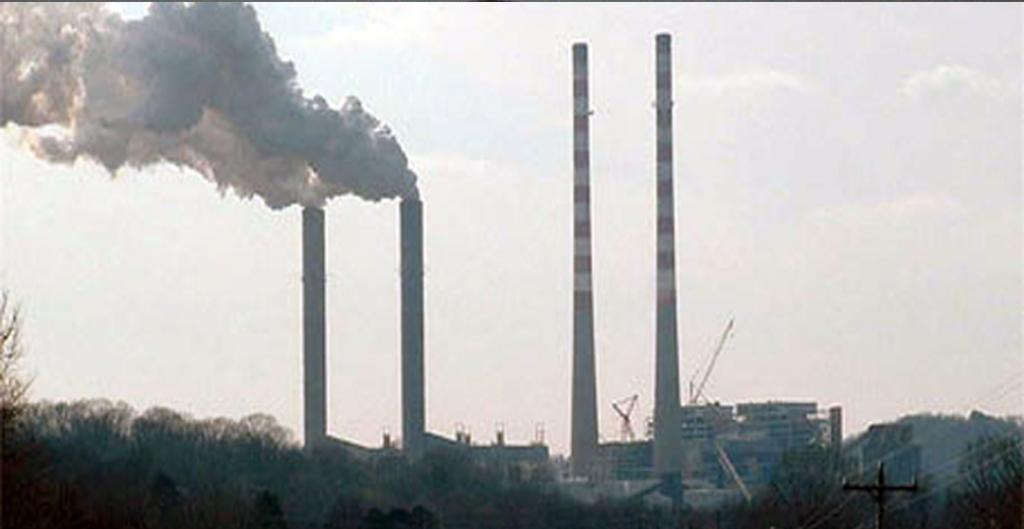 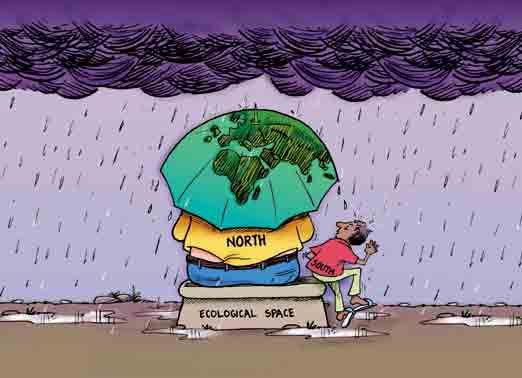 Can developing countries be asked to participate in cutting emissions on the grandfathering principle?

No, because to accept unequal per capita emissions as a basis for any agreement would be paramount to accepting a freeze in global inequality. As long as the world remains in a carbon-based economy, per capita entitlements will be important.

How can per capita entitlements be defined?

There are two basic approaches to define per capita entitlements.

1. The first is to equally allocate the emissions absorbed by the global sinks, especially global commons like the oceans, among all the people of the world. In this case, at the 1990 population levels, this gives a per capita sinks availability of 0.38 tonnes per capita (tC), which can be considered to be each person’s entitlement (see bar chart). But this entitlement is so low that while some countries will reach their limits very fast, there are many developing countries that have already crossed this limit, and industrialised countries are so high above this level that they will find it impossible to come down.

2. The second way is to decide on a safe concentration of greenhouse gases in the atmosphere that does not threaten to seriously destabilise the global climate, and then divide this budget among the world’s population.


The IPCC suggest 450 ppm as a safe concentration level (though even at this level there will be a temperature increase of 0.7 degrees centigrade and sea-level rise of 10-65 cm). In this case the per capita entitlement in 1990 would have been 1.1 tC per capita. The EU has spoken of a 550 ppm limit. The 1990 per capita entitlement would then have been 1.5 tC. Or the world could even decide on an ad hoc moving entitlement, of say 2 tC or even 2.5 tC, which could be subject to periodic reviews by scientists to ensure that the risk to the Earth’s systems is contained.

Under such an approach, both developing and industrialised countries know there are limits to emissions in a carbon-based economy, and are provided with a strong motive to want to move to renewable energy, where such restrictions no longer exist. Industrialised countries will have to make immediate cuts, while developing countries will be provided with some amount of ecological space to grow.
Who will benefit most from per capita entitlements?

Countries that are poorest will benefit most, because poor economies will have the lowest per capita emissions. Large poor countries will get the higher allocations. The only countries that will be disadvantaged in the South are those that depend heavily on coal.

How do per capita entitlements benefit Africa? 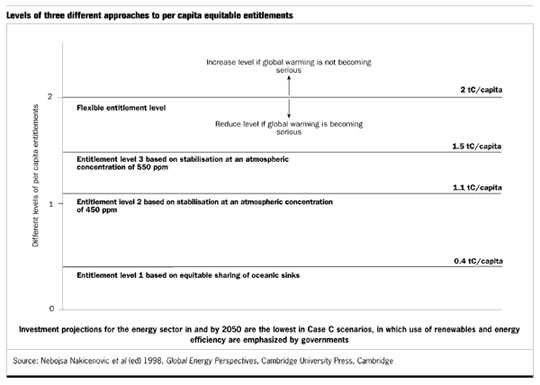 Per capita entitlements will solve the two problems that African countries have expressed with the CDM - that the market based mechanism will go entirely to large developing countries, as AIJ did in the past; and that African nations will have very little to say in how CDM can serve their priorities for sustainable development (see Equity Watch, Special Edition # 3).

The bar chart, which shows the unused per capita emissions of some of the African countries, are based on only the allocation of rights to the Earth’s sinks, and are hence much lower than they will be if they are based on acceptable concentration levels.

Per capita rights will give everybody a share that they can control better, and decide what sort of projects they want, in line with their sustainable development concerns. The poorer African nations will have larger entitlements. This will work better than promises for equitable regional and sub-regional distribution of CDM projects, which, past experience should have taught us, rarely materialise.
Are per capita entitlements only a sacred right?

No, they are also instrumental. They allow developing countries to trade their excess emissions, but also make them committed to reducing their emissions through rapid transition to non-carbon energy systems, so that they have more unused emissions to trade.

Because the later they come into the picture, the higher their emissions will be, and they would have lost the opportunity to trade those unused entitlements. The less they have to sell, the less resource they will have to make the transition to non-carbon. Since they have to get involved at some point, it is better they do it sooner, on their own terms, than later, with no clear definition of their rights.

At a later stage under the current framework, not only would their emissions be higher, but their cheap mitigation options would have already been bought up by industrialised countries. At that point, they will find it very difficult to take on emissions reductions. There will little or no North-South cooperation at this time since CDM will have already mopped up all the cheap options that exist in the South.

But will per capita entitlements create a lot of ‘hot air’?

Well, developing countries could just say that if this can be allowed for Russia when it suits the US, then why not for us? (Hence the importance of setting the right precedents in the first place).

But since developing countries are indeed interested in establishing a fair system, trading of entitlements could be restricted to only those emissions that they would have produced had they not undertaken measures to improve energy efficiency measures or use zero-carbon sources.
How will per capita entitlements play a role in encouraging equity within nations?

By encouraging the use of renewable technologies, which are modular. These technologies find an ideal market in the poor regions of the South, which are not yet connected to the electricity grid.