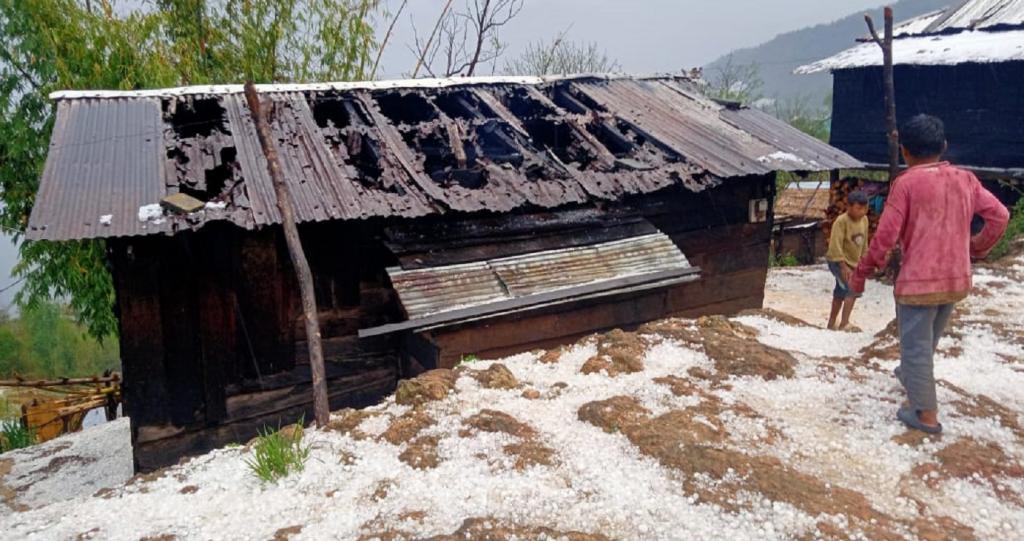 “I measured one of the hail stones. It was three inches and weighed 250 grams,” said local farmer Johan Yemchunter. In an hour, 273 of the village’s 393 houses were damaged.

The standing crops of maize, corn and kholar black beans were damaged. 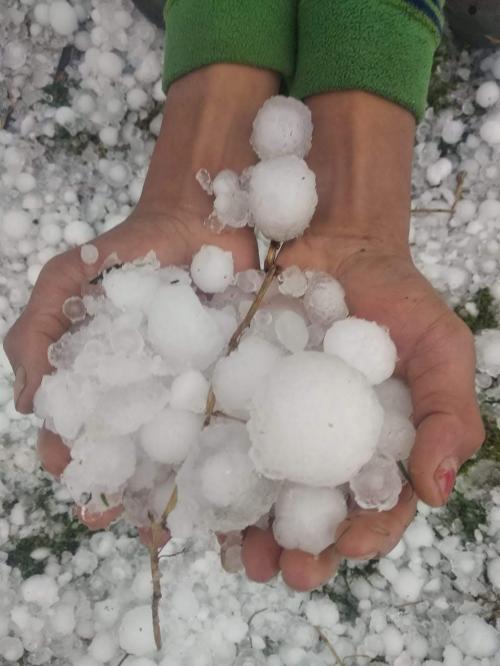 The hail stones tore through the roof. Photo: Anupam Chakravartty

These are not unheard of, but the ensuing damage is exacerbated by a top-down approach to rural development and disaster management, said Amba Zamir, policy analyst and executive director at non-profit Sustainable Development Forum.

April thunderstorms and hail are not unprecedented in the region. The lore of Bordoisila — the weather phenomenon personified — visiting her maternal home runs through several communities. The Assamese word originates in Bodo word Bardoisikhla: Bar means wind, doi water and sikhla girl.

But farmers at Bari Datara village in Assam’s Nalbari district, were agitated with the weather — since April 13, dust storms have led to cyclonic and hail storms. The weather has been changing every alternate day for over a fortnight, they said.

“It is a double-whammy, combined with the lockdown. We normally sell at local markets immediately after harvest and before Bohag Bihu (the mid-April Assamese new year),” research consultant and farmer Bonojit Hussain said.

The unusual weather also made it more difficult to store vegetables. “Fruit flies and pests made things worse. Farmers will throw away vegetables, if storage and protection costs go up,” Hussain said.

The state agricultural marketing board has procured vegetables, but mostly from big farmers with large stocks: “The board’s truck goes to larger holdings instead of making pit stops at every small landholding and asking farmers to assemble,” Hussain said.

Small and marginal holdings constituted 85.57 per cent of total land holdings, according to Agricultural Census 2010-2011.

State agriculture minister Atul Borah April 24 said the lockdown impacted vegetables worth Rs 34 crore. He announced that Rs 475 crore would be directly transferred to farmers. The department though didn’t present any plan for cold storage.

Narwan village in Meghalaya’s East Jaintia Hills is known for its oranges — almost 300 tonnes of it annually grown over 1,000 hectares. The variety, being grown there from “time  immemorial” has a distinct flavour, claimed local farmer Lamsuk Langstang. Governor RN Ravi recently launched Narwan oranges as a brand.

“We harvest our oranges a bit later than the rest of the North East — from March to April,” he said.

Stormy weather since March, however, forced the farmers to harvest early. “The standing crop would start rotting in a week due to the bad weather,” Langstang said.

Frequent thunderstorms and the lockdown have also hurt the fishing community on phums — floating islets of grasses and weeds — in Manipur’s Loktak lake.

Nearly 1,000 families dependent on fishing could not sell their fish or buy supplies. :We didn’t even have firewood to smoke and dry the fish,” said Rajen Thanga, secretary of All Loktak Lake Area Fisherman Union Manipur.

Thunderstorms and heavy rains damaged fishing equipment. The community approached the state government on April 1; the curfew was relaxed on April 24. But by then the community lost a month’s catch.

The India Meteorological Department (IMD) warned of heavy rainfall from April 15. But parts of Assam and Mizoram were under heavy thunderstorms from April 13.

Only a few showers reduced the rainfall deficit to 42 per cent from 50 per cent (at March-end), according to an IMD release.

Weather experts called it a ‘monsoon-like condition’. “The conditions have been persisting for a while and may have to do with global climate change,” said BN Goswami, former director of Indian Institute of Tropical Meteorology.

It’s a much larger system causing extratropical disturbances, he added: “The upper atmosphere is cool, but the lower parts have moisture, which is causing severe thunderstorms.”

“We found that thunderstorms and wild winds followed by rainfall played an active role in sequestrating carbon from the atmosphere to the biosphere — a phenomena not seen elsewhere in India,” said Supriyo Chakraborty of the Indian Institute of Tropical Meteorology.

Local weather phenomena were becoming less erratic and the intensity of events increased manifold, he added.