Even a modest rise in sea level would heighten tsunami threat globally: study

Unlike other sea-level extremes, tsunamis have a much larger spatial footprint. Credit: Petra Bensted / Flickr

Even a minor rise in sea level will create greater risk of tsunamis for coastal communities across the world, claims a study by a team of scientists from multiple universities. According to the study, which was published in Science Advances journal, in future, smaller tsunamis can have the same adverse impacts as big tsunamis would today, given the possibility of increased flooding farther inland from tsunamis, following earthquakes.

Globally, smaller tsunamis triggered by earthquakes with smaller magnitudes occur frequently, making the findings of the study even more important.

Scientists from the Earth Observatory of Singapore, the Asian School of the Environment at Nanyang Technological University, and National Taiwan University received support from Virginia Tech's Robert Weiss, who was instrumental in creating computational models and data analytics frameworks.

Findings of the study done in Macau

The scientists, including Lin Lin Li, a senior research fellow, and Adam Switzer, an associate professor, at the Earth Observatory of Singapore, created computer-simulated tsunamis at current sea level and with sea level increase of 1.5 feet and 3 feet in Macau—a densely populated coastal region in South China that is generally safe from current tsunami risks. 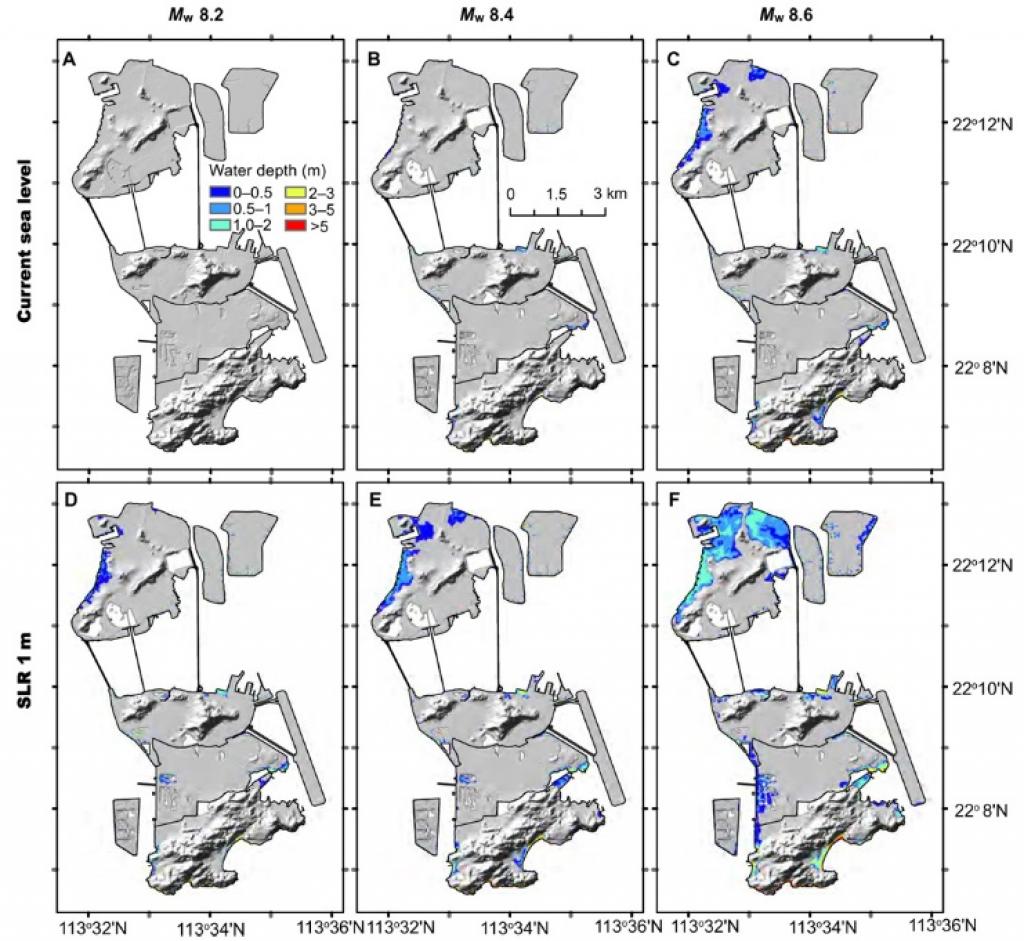 The study found that at current sea level, only an earthquake of magnitude 8.8 can cause widespread tsunami inundation in Macau. However, with the sea-level rise by 1.5-feet, frequency of tsunami-induced flooding has been observed to increase by 1.2 to 2.4 times. Similarly, for a 3-feet rise in sea level, the frequency of tsunami inundation increased by 1.5 to 4.7 times. The study estimated that sea levels in the Macau region will increase by 1.5 feet by 2060 and 3 feet by 2100.

"The increased inundation frequency was contributed by earthquakes of smaller magnitudes, which posed no threat at current sea level, but could cause significant inundation at higher sea-level conditions," says Li.

The threat of large tsunamis in the South China Sea region comes from the Manila Trench, a megathrust system that has not experienced an earthquake larger than a magnitude 7.8 since the 1560s. Yet, one of the authors of the study cautioned that the region resembles the characteristics of the source areas that resulted in the 2004 Sumatra-Andaman earthquake and the 2011 earthquake in northern Japan.

Globally, coastal communities are faced with a challenge of gradual loss of land directly near coasts and increased chances of flooding even during high tides.

Unlike other sea-level extremes, for example, storm surges and extreme tides, tsunamis have a much larger spatial footprint, according to the study. “Although the vulnerability of coastal communities to rising seas is well known, the capacity for a single tsunami event to devastate coastal areas is rarely considered in coastal planning,” observes the study.

Urging governments to study local sea-level change more comprehensively to create better predictive models, the researchers call for putting in place some protective measures like seawalls or green infrastructure by factoring in the sea level rise. "The South China Sea is an excellent starting point for such a study because it is an ocean with rapid sea-level rise and also the location of many mega cities with significant worldwide consequences if impacted,” said Weiss.