I wish I had accepted the offer by the local exporters to sell apples in October,” says 45-year-old Gulzar Ahmed Malik, owner of an orchard in Jammu and Kashmir’s Shopian district, often called the Apple Basket of the state. He decided to wait till mid-November as apple prices peak around Diwali.

In the evening of November 2, rains started, but as night fell, it turned into snow, and continued for the next 24 hours. By the time the sun shone again, about half a metre thick snow had transformed the trees laden with apples worth 550 cartons into white mounds. The snowfall had split the trunks of many of Malik’s apple trees and the frost introduced moisture into the apples, which over the next few days developed dark blotches, leaving them discoloured and soggy.

Malik has never seen such heavy snowfall in early November in the two decades he has been running his orchard. The Valley usually receives snowfall between December and February and by then the fruits are plucked and the apple trees undergo foliage loss, says Manzoor Ahmed Qadri, director of the Kashmir horticulture department.

In Shopian, where damage assessment is still underway even after a month of the snowfall, initial estimates suggest over 40 per cent of the apple trees were damaged, says Abdul Hamid, chief horticulture officer, Shopian. In the neighbouring horticulture district of Kulgam, which has completed its assessment, 50 per cent of the 7 million apple trees were damaged, says Shameem Ahmed Wani, district development commissioner, Kulgam. Of these, 15 per cent were “completely damaged”, which means they got either “uprooted, or broken beyond repair”. The assessment excludes trees too old or too young to bear fruit, indicating that the long–term damage of the snowfall would be higher. Wani says the unexpected snowfall may have affected over 0.13 million farmers in the Valley’s two districts alone.

“The last time it snowed in the first week of November was in 2009, but the amount of snow was negligible,” says Sonam Lotus, director of the state’s meteorology department. According to the weather station in Srinagar, precipitation (snowfall and rains) this November stood at 118.1 mm, the highest since 1980. In the 33 years between 1980 and 2018, the precipitation that month never crossed 50 mm. The weather observatory station at Qazigund, closest to the two horticulture districts, recorded 115 mm precipitation in the first week of November.

Besides the losses, the recent snowfall highlights two worrying aspects: erratic weather events are increasing in the Valley and the government is largely ill-prepared to handle them. “We have witnessed an increase in droughts, floods, snow-less years and untimely heavy snowfall in the past two decades,” says Shakeel Romshoo, head, Department of Earth Sciences at the University of Kashmir. The Valley has recorded at least four extreme weather events in the last four years. Romshoo blames it on climate change.

On the other hand, the meteorology department has failed to predict the erratic weather events. Most orchard owners say had they been warned of the November snow, they would have plucked and packed the apples that were ready by October. The last warning issued by the department, released on the social media on October 30, reads, “A spell of light to moderate rain, snow (over higher reaches) at most likely during 31st (October) night to 3rd November, with maximum intensity on 1st and 2nd November in J&K”. The warning at best predicted, “moderate snowfall…on Mughal Road, Zojila, Sinthan Top, north Kashmir, mountains of Ladakh, mainly Kargil district etc”. There was no mention of snowfall in Shopian and Kulgam.

Calling the event “unprecedented, very rare”, Lotus says 100 per cent accuracy is not possible due to the “instability in the atmosphere”. He, however, accepts that “there is scope for improvement in forecasting. But what we have, we are using it well to give people an understanding of the weather to come”. 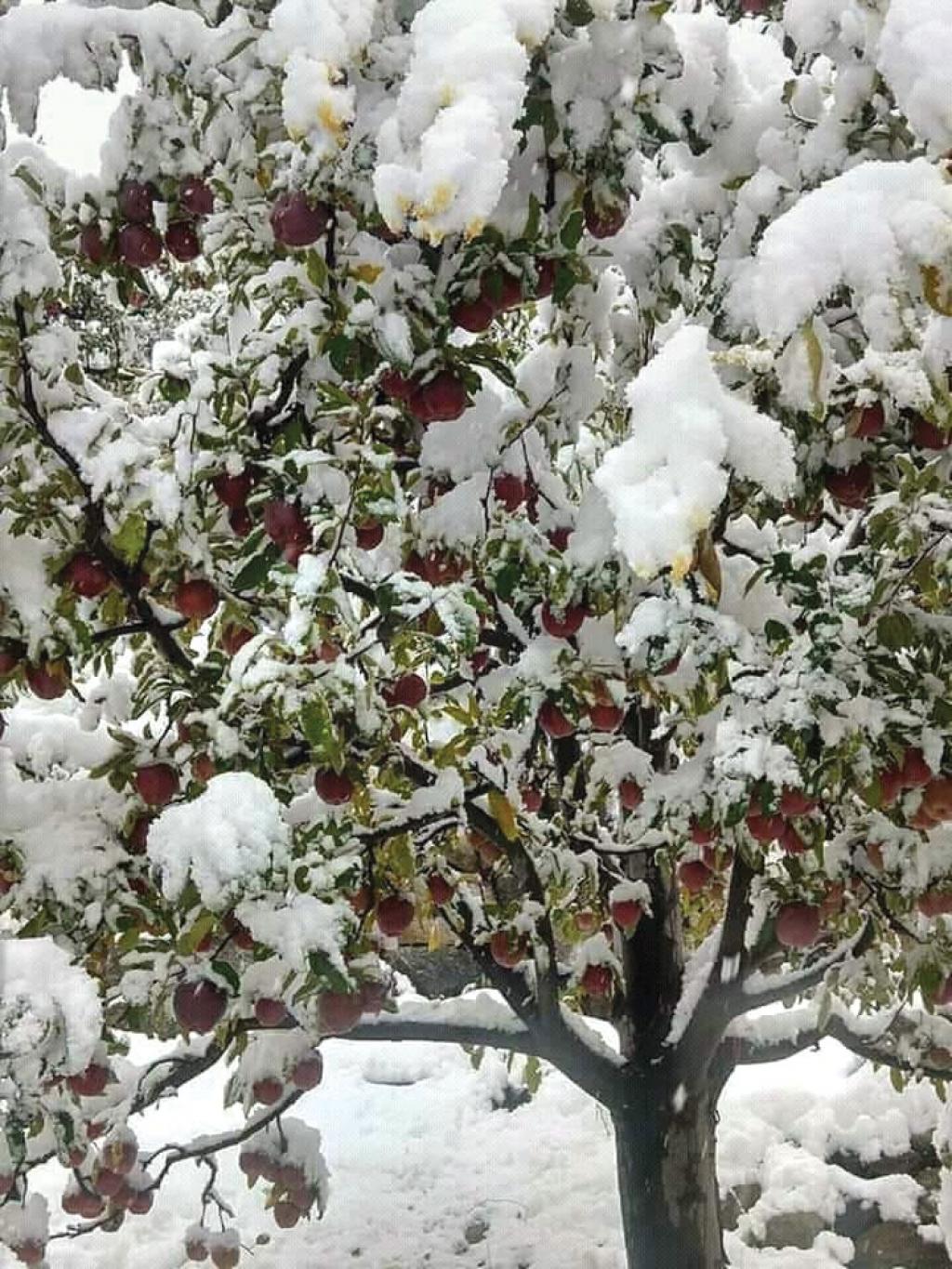 A week after the November snow, the Jammu and Kashmir government termed it “untimely, unexpected and intense” and notified it as “state-specific special natural calamity”.

So far, snowfall is not considered a disaster under the state’s Disaster Management Policy, released in 2011. Frost conditions and avalanche are categorised as a disaster though. State’s chief secretary B V R Subhra-manyam has announced Rs 10 crore to each of the affected districts and asked for additional assistance to the affected farmers from the State Disaster Response Fund. The state has also declared apple as a perennial crop and enhanced the quantum of relief from Rs 18,000 a hectare to Rs 36,000 a hectare. Orchard owners, however, say the compensation announced by the government is a cruel joke.

Manzoor Ahmed Dar of Hanand village of Kulgam says he had estimated to earn Rs 2 lakh from his produce, but managed to get only Rs 30,000 after the frost injury. He will receive another Rs 10,800 as compensation for his orchard of 6 kanals (0.3 hectares). “I spent Rs 60,000 on the orchard this year and took a loan to buy the pesticides. How will I repay that loan now?” asks Dar, adding that his effective loss is over Rs 1.5 lakh even after the government support.

Qadir says the government is only focusing on the immediate losses while “the uprooted and broken trees are a loss to the farmer for many years to come”. It takes about five years for an apple tree to start bearing fruits and 10-15 years to mature and yield fully. In Kulgam and Shopian districts, a mature apple tree gives a farmer at least Rs 2,000 per year. So, a single fully damaged tree would mean a farmer losing at least Rs 10,000 over five years.

For long, orchard owners in Kashmir have been demanding the implementation of crop insurance schemes, which can provide some relief to the farmer in the event of a crop failure. The government, however, has been dragging its feet over it. The Pradhan Mantri Fasal Bima Yojana was approved by the state government last year, but it is yet to be implemented due to “non finalisation of insurance company”. In February 2018, the state Cabinet approved the Restructured Weather-Based Crop Insurance Scheme for cash crops like apple and saffron, but it is yet to be implemented.

In the wake of the snow disaster, a central team of the Technical Advisory Committee visited Kashmir “to finalise the modalities for crop insurance schemes… in Kashmir division for apple and saffron”. This development has not excited the orchard owners who say the move is reactionary and lacks intent.