Around 2,000 people have died due to the present heat wave, with maximum deaths recorded in Telangana and Andhra Pradesh 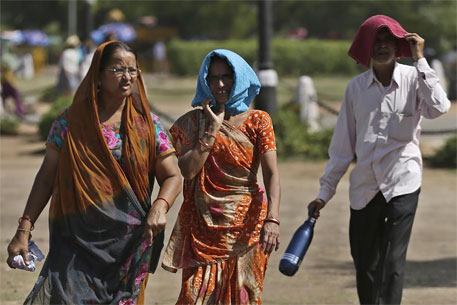 The intense heat wave condition that is sweeping across India could be another manifestation of an extreme weather event, say researchers from the New Delhi-based research and advocacy organisation, Centre for Science and Environment (CSE). About 2,000 people have been killed in India by this weather condition. In the worst-affected states of Andhra Pradesh and Telangana, maximum temperatures have hovered around a searing 45 degrees Celsius.

According to CSE, a heat wave is declared when the temperature is five degrees or more than the average temperature recorded on that particular day over the last three decades. Cities feel the brunt of the elevated temperatures, because of the magnified effect of paved surfaces and a lack of tree cover – this is known as the “urban heat island effect”.

Cities face ‘urban heat island effect’
“Urban heat island effects can make ambient temperatures feel 3 to 4 degrees more than what they are,” says Arjuna Srinidhi, programme manager with climate change team at CSE, in a recent press release by the non profit. He further adds, “Compared to 2010, heat wave conditions in 2015 so far have been of a shorter duration, yet with a higher death toll. This could be due to the sudden change in temperatures after a prolonged wet February and March that had kept the temperatures cool.”

Heat waves likely to worsen in future
Climate records show that human-induced global warming had turned 2014 into the hottest year on record. “Eight out of the 10 warmest years in India were during the past decade (2001-2010), making it the warmest decade on record with a decadal mean temperature anomaly of 0.49 °C,” says the CSE press release.

CSE climate researchers say more heat waves were expected as globally temperatures had risen by an average .8 degrees in the past 100 years. Night-time temperatures are rising too, with Ahmedabad and Delhi recently reporting 39 and 36 degrees Celsius. “The number of heat-wave days may go up from about five to between 30 and 40 every year,” they add.

The UV effect
“Additionally, owing to the rising temperatures, ultra violet (UV) rays emerging as a serious menace for people’s health,” says CSE. A recent Down To Earth story had cited data from the Pune-based Indian Institute of Tropical Meteorology (IITM) showing that in several cities, including Delhi, UV rays are above normal. IITM set up a monitoring system in Delhi two weeks ago and has found that UV rays are ranging between six and nine on the UV index – this carries medium to high health risk.

Building resilience
According to CSE researchers, “Building resilience through climate change adaptation becomes an imperative role of the state and national governments. This includes building awareness about heat waves and their effects, issuing proper warning systems and building capacity of health workers to deal with such events.”