How to face a rising sea? Maldives bets on artificial islands 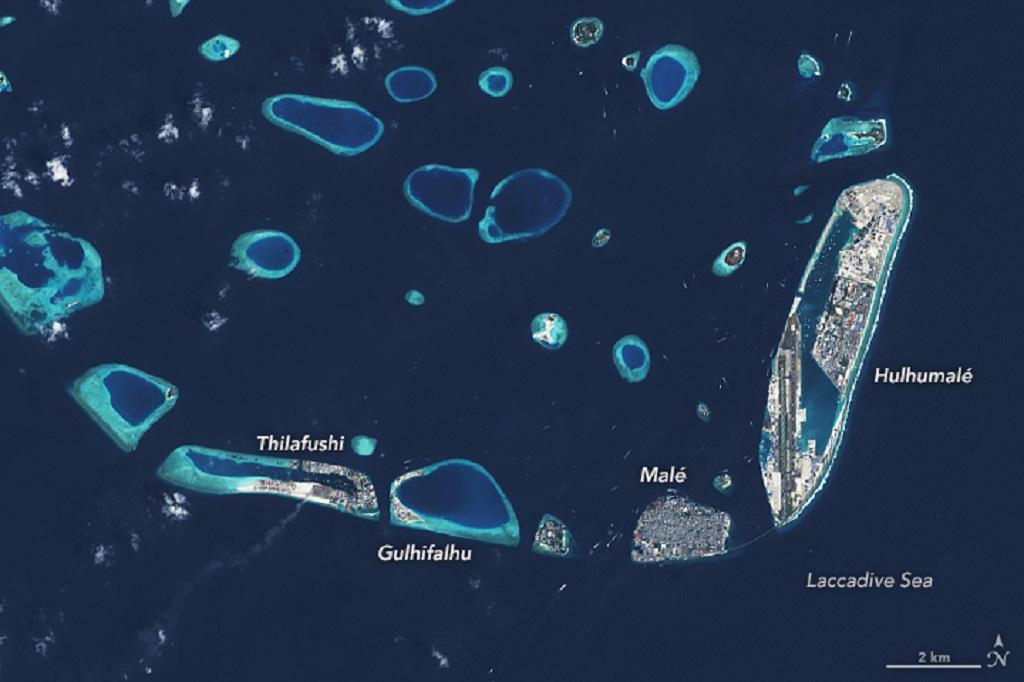 The government of Maldives, one of the most low-lying terrains in the world, is developing at least three artificial islands to tide over the rising sea-levels due to climate change, showed a report by the National Aeronautics and Space Administration (NASA).

Hulhumale, located to the northeast of the archipelago’s capital, Male, is a prominent example. It has been created by pumping out sand from the seafloor onto a submerged coral platform and is now Maldives’s fourth-largest island, said the report.

About 80 per cent of Maldive’s 1,190 coral islands are at an elevation of less than 1 metre (m) above sea level, the report noted. Globally, the annual sea-level rise is recorded at 3-4 millimetres and has been accelerating. At this rate, it is only a matter of time that many of the islands are submerged.

Low-lying islands will become uninhabitable by 2050 due to flooding and scarcity of freshwater, a 2018 United States Geological Survey study concluded.

Sea-level will rise half a metre by 2100 if greenhouse gas emissions are drastically reduced, or by 1m if they continue to rise, the Intergovernmental Panel on Climate Change had warned.

Hulhumale, that rises 2m above sea level, could become a refuge for Maldive’s population.

The government had started constructing Hulhumale in 1997 on a lagoon off Male to accommodate the capital’s population swell. Now, the island covers an area of 4 square kilometres and is home to 50,000 people. Its population could grow to 200,000 in the future.

"Maldives government has also explored plans to purchase land on higher ground in other countries as an insurance policy against sea level rise," said the report.

Since the 1990s, the government has also expanded at least two other coral atolls —Thilafushi and Gulhifalhuea — through land reclamation. They are currently being used as industrial areas or landfills.

The natural properties of these coral atolls to resist sea-level rise offers a glimmer of hope, the report noted. Most of these reefs in Maldives and elsewhere “have remained stable or even grown larger in recent decades”, NASA pointed out based on data from studies.

There are a couple of theories to explain this phenomenon. One, storms and flood that sweep the islands can deposit sediments scooped up from other land masses and elevate these islands.

The second theory is that the coral reefs can produce excess sediment and grow taller, outpacing the rise in sea levels.

Murray Ford, a geologist at the University of Auckland, told NASA:

The key thing to understand is that these islands aren’t static. They don’t sit passively as if they were in a bathtub and slowly drowning. They are constantly being reshaped by oceanographic and sedimentary processes.

The report, however, warned of human activities that interfere with the natural processes of the coral reefs. It suggested that new islands that are being built should factor in the sea-level rise.