Human-induced climate change likely to increase average temperatures in Uganda by up to 1.5 ºC in 20 years 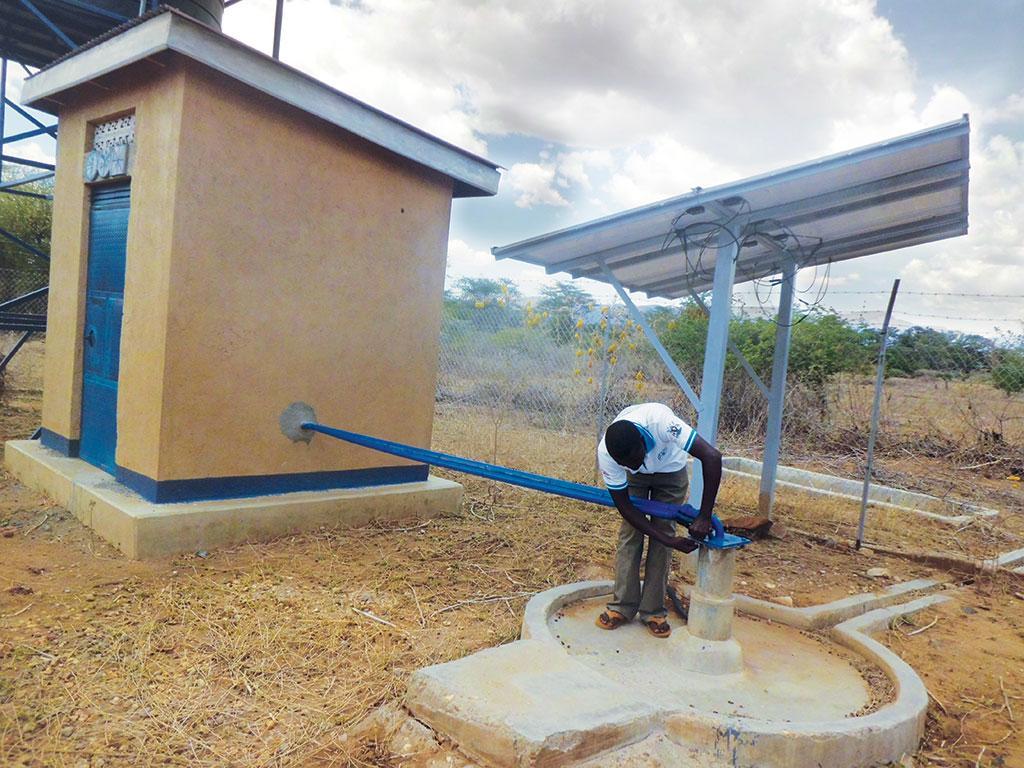 It is 8:00 am. I get out of my tiny hotel room where I spent a night in Moroto in the North Eastern part of Uganda to interview the Karamojong farming community about the prolonged dry spell which hit the entire country last year.

I am led by Thomas Oyugi, a farmer leader of Katanga village, Niatakwaeparish, 1 km east of Moroto town.

The situation looks pathetic as the entire grassland is dried up. I see farmers gathered in different homesteads listening to the weather forecast announcements on the community radio stations in the local dialect.

These farmers who are grouped into field schools by agronomists from the Food and Agriculture Organization were sensitised on effects of the dry spell and how it will affect their farming system. They are urged to always listen to the early warning system broadcast programme from their radio sets.

Gloria Ato, a farmer engaged in growing sorghum, a major staple food crop in this region, is seated in front of the family homestead listening attentively to the weather forecast announcements.

“It is the month of December and you can see the grassland is dry, this is what we have been experiencing throughout the year. We usually experience rains once a year in the month of July to October, but this has not been the case this year. It has caused disaster because our animals lack water and pasture, they are dying in big numbers. I am lacking food for my family because I cannot till the land. We are depending on food ratio from World Food Programme,” Ato laments.

A visit to the pastoralists in Kadilakeny village, Rupa County, 5 km west of Moroto town is a nightmare.

A village health team leader, Esther Kayinda leads me to a group of pastoral farmers gathered under a tree shed. Their leader Albino Moru noticed that I am journalist who has come to gather information about their plight. He is optimistic that I will be of help.

“My daughter, educated people have been coming here talking about climate change.” Pointing at the only borehole facility providing water to the community and their animals, he explains, We have decided to regulate the use of water. You see the youth are not here, they have trekked 50 km to Kobebe village, where the government constructed a dam in search of water and pasture for our cattle.”

The dam is an initiative by government to provide water for Karamonjong communities living in Matheniko village. Unfortunately, it was constructed in Bokora, Pian Upe, Matheniko Wildlife Reserve.

Kayinda says there is a conflict of interest between the farmers and the management of Uganda Wildlife Authority who condition the cattle keepers to graze their animals and access water for a limited time.

Lawrence Biyika Songa, the chairperson of the Uganda Parliamentary Forum on Climate Change explains that climate change impact in Uganda is real, and manifests in the form of prolonged dry spell and floods.

In Uganda, landslides have been reported in the mountainous areas in the East at the slopes of Mountain Elgon and in the West around Mufumbiro and Rwenzori ranges where deforestation killed many.

“The Bududa landslide occurred in 2010 affecting communities killing dozens of people and the survivors were relocated to Kiryandongo in Masindi district were they are living to date. In 2013, there was the second landslide which was a result of a three day heavy downpour severely affecting villages burying crops and animals. Last year, it was the same trend affecting three villages where houses were knocked down, livestock buried and affected at least 200 families.  These are trends which have never occurred before in Ugandan history,” says Songa.

He explains that the recent heat stress is so severe that people are clashing over water resources in the rural areas; the forest cover is being depleted by people for making charcoal as a source of energy.

The floods are causing soil erosion, thereby degrading land for agriculture coupled with pest and disease infestation on major food security crops, such as cassava, banana, beans, rice and groundnuts.

Coffee, which is a key cash crop of the country, is being affected by coffee wilt disease and coffee twig borer affecting production.

Songa mentions sharing River Nile's water resources with Egypt and Ethiopia is a challenge unless an agreement is made.

The prolonged dry spell is affecting the water level leading to less power generation which is a challenge in the energy sector yet the country heavily depends on hydroelectricity power.

Explaining the health challenges, Songa notes that there is a tendency among rural communities and people living in slums in cities to use contaminated water for cooking and drinking. This leads to cholera outbreaks, causing deaths.

A number of people suffer from helminthes particularly those living along banks of lakes, such as Lake Victoria, Lake Kyogo, Lake Edward and River Nile.

He contends that climate change impact seems to be wiping out the natural vegetation of Uganda with the forest cover being affected the most.

Diseases such as fall army worm which is destroying cereal crops including cotton in the entire African continent has become a menace.

The State Minister for environment Gorret Kimono Kitutu notes that Uganda is experiencing erratic weather conditions which were not the case in the past.

She, however, contends that Uganda’s contribution in terms of greenhouse gas emissions compared to industrial countries is negligible.

She gave an example of Rwenzori with cooler temperatures in the past which is no longer the case and the place has become prone to mosquito breeding and the spreading of malaria.

There is a specific species of three-horned Chameleon, which were breeding on the slopes of Mountain Rwenzori but they have since moved to the tip where there is formation of ice cool enough to survive.

She says the cattle corridor stretching from Masindi district through Nakasongola to the Easter part of the country and to the Karamoja region has been affected severely. The animals lack adequate pastures and water. They are infected by diseases such as food and mouth disease and other tick borne diseases.

Songa notes that Uganda has a climate change policy which advocates for deliberate government initiative to restore wetlands and alternative use of energy resource, such as wind and solar energy which is picking up in the rural areas including use of energy cook stoves.

He notes that during the COP21 annual meeting, Uganda Government committed to reducing carbon emissions by 22% in a bid to mitigate and adapt to climate change and transit to a low-carbon climate resilient economy.

Minister Kitutu explained that as part of the environmental and nature management strategy she has received a presidential directive to give out tree seedlings to all Uganda’s legislators for planting in their constituencies. The excise is ongoing and seedlings of Musizi tree species and Prunus Africana have been purchased worth $ 406,282.

It is expected to cover 400 hectares of land in the entire country with a focus on Sango bay areas in central Uganda which has been affected severely.

The initiative of tree planting has been instilled in Ugandans by different development partners as a solution to replace tree cover which is depleted.

There are 506 forest reserves in the country and they are currently under tight security protection by environment police to avoid depletion by neighboring communities.

Meanwhile agricultural scientists are breeding improved crop varieties which are tolerant to drought, pests and diseases. A number of these varieties ranging from maize, rice and bananas among others are already with farmers.

Human induced climate change is likely to increase average temperatures in Uganda by up to 1.5 ºC in the next 20 years and by to 4.3 ºC by the 2080s. Uganda’s Ministry of Water and Environment is spear heading its commitment by developing the Uganda Green Growth Strategy, centred on measures to combat climate change effects, including tree planting and use of clean renewable energy.

The 2016 Uganda climate action report by the ministry of Water and Environment states that government has committed to allocate modest resources to implement climate change strategies in mitigation and adaptation towards a target of 30 per cent in the next 15 years. The strategy estimates that Uganda would require USD 2.9 billion to implement mitigation strategies.

These actions will result in achieving a total of at least 3,200 Mega Watts renewable electricity generation capacity by 2030 and forest cover will increase by 21 per cent and wetland coverage by 12 per cent.