Methane, the major GHG from livestock, remains in the atmosphere for only 10 years but traps 28 times more heat than CO2 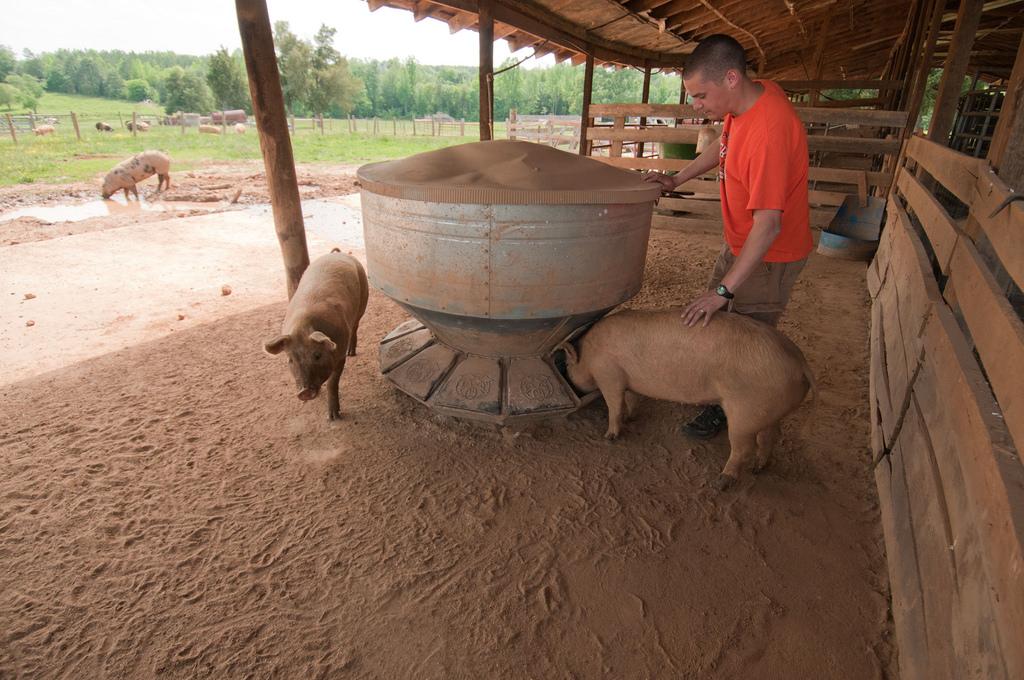 It is not only meat production but expansion of feeds industries, too, contribute to increased emission. Credit: USDA/ Flicker

The biggest drivers of greenhouse gas (GHG) emission on the planet are industrial meats and dairy rather than transportation, says a new report. However, the rich countries, where these industries are mostly located, have been sidestepping these findings. Moreover, the meat industry lobbyists accuse poor and developing countries for it.

The new report published by Spain-based international non-profit GRAIN in January this year claims that industrial meat production generates more GHGs than the world’s entire transportation sector. Due to the pressure from meat industry lobbyists, no meaningful action has been worked out to cut emission.

The GHG emission has been causing rise in global temperature, which is perpetuating climate change. The target of reducing greenhouse gas emission to limit global warming to 2°C by 2050 can be achieved by cutting down industrial meat and dairy consumption. 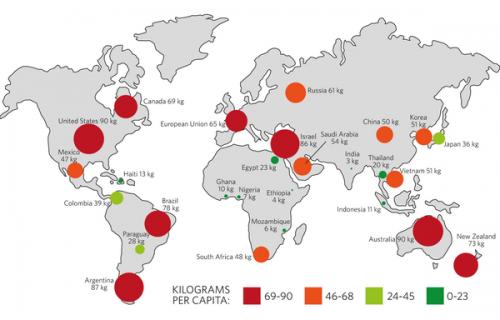 North America, the European Union (EU) and Brazil, together, account for half of all beef consumed worldwide. The consumption of meat is on the rise in China, Vietnam, and other countries as fast food restaurants, meat import and factory farming are expanding.

According to the report, if the trends continue, the world meat consumption will grow by whopping 76 per cent by 2050 and emission will increase by 65 per cent.

It is not only meat production but expansion of feeds industries, too, contribute to increased emission. The production and processing of feed for animals are contributing almost half of total GHG emission. Increasing the production of feeds leads to change in land use patterns and deforestation.

In 2010, one-third of all cereals are being used for production of feeds. According to the estimates by the Food and Agriculture Organization (FAO), this number would increase to 50 per cent in 2050. At the same time, an additional 56 million hectares of land was used to cultivate soybeans and maize for animal feed in the first decade of 21st century. It led to the loss of natural grassland as well as forest area.

Besides, these feed crops are grown with chemical fertilizers, which are another source of greenhouse gas.

In the early 1990s, one-tenth of dairy farms in the US used to keep around 1000 cows. But by 2007, such farms formed one-third of total farms in the US. With the concentration of livestock per farm continues to increase unabated, huge amount of manure deposited by animals turns into a toxic problem.

According to the FAO, manure storing and processing are responsible for 10 per cent of all GHG emission related to livestock worldwide.

How GHG emission can be reduced by cutting down meat consumption?

According to the report, if the consumption of meat is maintained as per the WHO recommendation dietary guidelines, the world would reduce GHG emissions by 40 per cent.

Methane, the major GHG from livestock, remains in the atmosphere for only 10 years but traps 28 times more heat than other major GHG— CO2. Consequently, lowering the production of methane gas is a relatively quick payoff.

The meat and dairy industry has been consistently blocking the efforts to reduce emission. The industry lobbyists twisted the facts and accused herders of poor and developing countries emitting more GHG than industry. They fear that any effort towards minimisation would hit their profit hard.

“But efforts to tackle the issue invariably bump up against aggressive resistance from meat and dairy companies, who have the most to lose from actions that reduce consumption and curb factory farming…” states the report.

The report quoted Rajendra Pachauri, who was the chairman of the International Panel on Climate Change (IPCC) from 2002 to 2015 to show how Pachauri was targeted for raising the issue of eating less meat.

“I have been hit on the head several times for suggesting that people should eat less meat. I was the target of several efforts to discredit me” Pachauri had said.

Even the FAO was attacked by the meat industry lobbyists after coming out with a report in 2006, putting livestock’s share of global GHG emission at 18 per cent.

"You wouldn't believe how much we were attacked", said Samuel Jutzi, director of the animal production and health division of the FAO.

According to the report, the FAO buckled under pressure from meat lobbyists and formed a joint team with main lobbyist groups to reassess the emission.

Both the Steering Committee and its Technical Advisory Groups of joint team are dominated by representatives of meat companies and their funded scientists. This committee had ‘narrowly assessed’ the emission and accused the poor and developing nation.

The joint report accused the farmers and herders of poor and developing countries of emitting GHG with ‘higher intensity’ than meat industry of developed and rich countries.

“…Measured this way, animals that are intensively raised for maximum output of meat and milk—by a few million farmers mostly in the US, Europe, Brazil, New Zealand and a few other rich countries—have a lower ‘emissions intensity’ than the animals of poor farmers, which are raised for many more uses and without access to the high protein feed, antibiotics, growth promoters and hormones used by intensive livestock industries. Poor farmers are thus said to suffer from an ‘emissions intensity gap’ and should be pushed into what is termed ‘sustainable intensification’ or, more broadly, ‘climate smart agriculture’….” states the report.

The small farmers and herders are practicing low-emission and mixed farming, with 200 million herders often using barren lands to let their cattle graze. The network of 630 million small farmers in the global south region consumes less meat and their system creates positive synergies between crops and livestock.

The report demands revised guidelines on consumption of meat and some fiscal measures like increasing price of industrial meat and related products. The issue of enormous subsidies given to industry, which make the industrial meat cheap, should be looked into it. In the US, two-thirds of farm subsidies go to meat and dairy industries, including feed industries.