A report titled the Truth Behind the Climate Pledges was released on November 5, 2019 by the United States-based Universal Ecological Fund (Fundación Ecológica Universal or FEU-US, a partner of the older Argentinian organisation with the same name). It has judged almost 75 per cent of the 184 pledges made by various countries under the Paris Agreement as insufficient to slow climate change.

The report classifies pledges which commit to reducing 2030 emissions by over 40 per cent compared to 1990 levels as ‘Sufficient’ and 20-40 per cent reduction pledges as ‘Partially Sufficient’. Pledges with mitigation targets under 20 per cent or those with conditional commitments where the country is implementing at least 50 per cent of the pledged mitigation actions from their own resources were deemed ‘Partially Insufficient’ while those with no targets for absolute emission reduction and those which rely on international financing more than 50 per cent of their mitigation actions were deemed ‘Insufficient’. 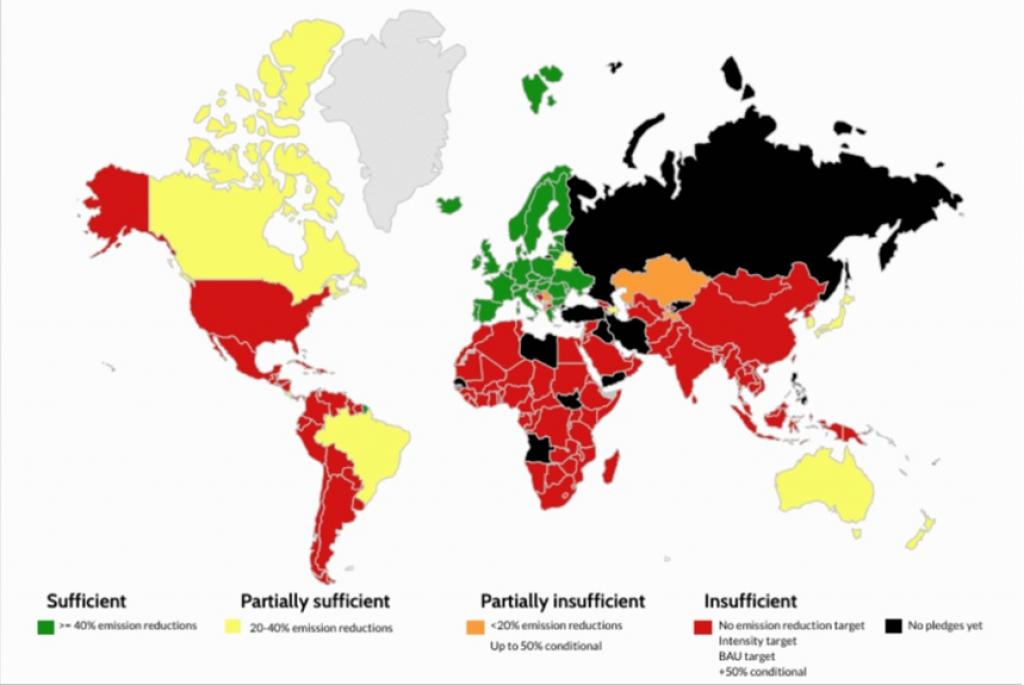 Source: FEU-US, The Truth Behind the Climate Pledges, 2019

In ranking all countries’ efforts based on a reductionist criteria of absolute emission curtailment targets, the report is notable in its abandonment of the principle of “Common But Differentiated Responsibilities and Respective Capabilities” enshrined in the 1992 United Nations Framework Convention on Climate Change (UNFCCC). It thus puts blocs and countries such as the EU and the US, which have a high share of historic emissions, high current per capita emissions and massive accumulated wealth which enables them to do much more to mitigate climate change on the same platform as poor countries in Africa, Asia and Latin America which share none of those attributes.

Thus Canada, which continues to aggressively build fossil fuel infrastructure and whose per capita emissions are higher than even the US (the traditional climate villain) is better ranked than all of the poor world. Indeed, the ranking actively punishes poor countries by penalising the use of international finance for mitigation.

The FEU-US report pre-empts this criticism by arguing that the structure of the world economy has changed; while industrialised countries accounted for half of global emissions two decades ago, middle income countries account for the same share today. It contends that many countries, which were classified as developing countries when the UNFCCC was signed may today be deemed as high income.

It is indeed true that all countries must do more to mitigate climate change and action by rich countries alone cannot avert a climate catastrophe. But in meeting the global target, climate justice demands that rich historic emitters must shoulder a substantially higher share of that burden.

Further, the report entirely sidesteps the question of per capita emissions. Finally, while it is true that the global economy has undergone a structural transformation, this merely calls for a reclassification of relevant countries, rather than abandoning differentiation altogether.

It is no secret that most countries are simply not doing enough to address emission mitigation, and that the world is not on track to limit warming to 1.5 degrees or even 2 degrees by the end of the century. However, the report’s high profile authors including Robert Watson (a former chair of the Intergovernmental Panel on Climate Change or IPCC as well as a World Bank scientist and White House advisor), James McCarthy  (a Harvard professor, former President of the American Association for the Advancement of Science and a former chair of an IPCC Working Group), Pablo Canziani (a Professor at Argentina's National Technological University and a former IPCC lead author), Nebojsa Nakicenovic (Deputy Director General of the Vienna-based International Institute for Applied Systems Analysis as well as an IPCC lead author) and Liliana Hisas (executive director of the Argentinian FEU) will no doubt lend it much weight in the discourse leading up to the present CoP.

It thus needs to be emphasised that while it may have some use as a “quick and dirty” global stock take, its ranking methodology merely represents a fresh attempt at abandoning a fundamental and long cherished principle of global mitigation action.