Is the global warming ‘hiatus’ over?

There are many ongoing signs that the planet is heating up, even “on fire.” 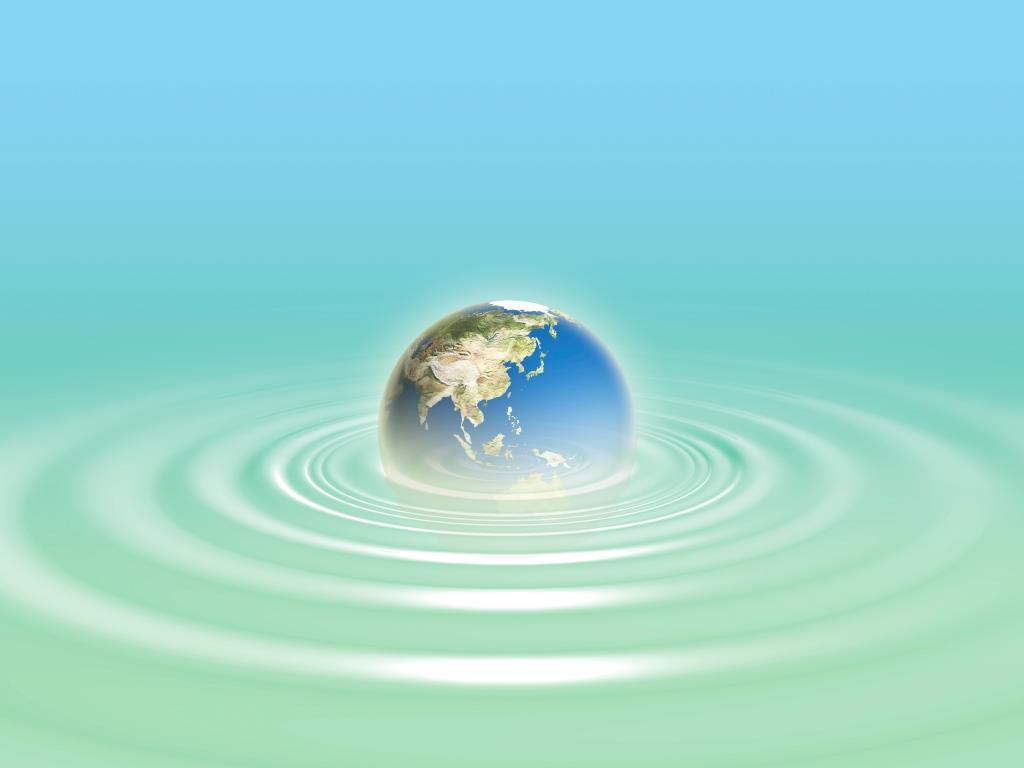 There are many ongoing signs that the planet is heating up, even “on fire.”

In the western region of North America, the prolonged drought has led to high temperatures and many wildfires, from Canada and the Northwest earlier this summer to California more recently. The Pacific is very active with hurricanes, typhoons and tropical cyclones, and with several damaging hits in Japan, China and Taiwan, in particular. So far, by contrast, the Atlantic tropical storm season is quiet.

Globally, surface temperatures have been setting record high values (see figure below). US temperatures this year are well above normal as a whole, running 1.7 Fahrenheit above the 20th-century average (through July; the 10th highest on record). However, precipitation has been well above average in much of the country outside of the West, making temperatures lower than they otherwise would have been (owing to more cloud and evaporative cooling).

So what’s going on? Increased warming is expected because human activities are leading to increases in heat-trapping greenhouse gases, mainly carbon dioxide from burning of fossil fuels. And indeed, the global mean surface temperature (GMST) has been rising fairly steadily: every decade after the 1960s was warmer than the one before, and the decade of the 2000s was the warmest on record by far; see figure.

At the same time, it is readily apparent that there is variability in GMST from year to year and decade to decade. This is expected and known to arise largely from internal natural variability. While the rate of surface temperature increase has been mostly upward from about 1920 and the recent rate is not out of step overall, there are two hiatus intervals with much lower rates of temperature increase. The first was from about 1943 to 1975, and the second was from 1999 to 2013.

In a paper entitled Has There Been a Global Warming Hiatus?, I find that natural variability through interactions among the oceans, atmosphere, land and ice can easily mask the upward trend of global temperatures. For climate scientists to improve climate models, better understanding of these variations and their effect on global temperatures is essential.

The warmest year in the 20th century was 1998. However, since then there has been an apparent absence of an increase in GMST from 1998 through 2013. This has become known as the “hiatus.” While 2005 and 2010 GMST values slightly exceeded the 1998 value, the trend upwards slowed markedly until 2014, which is now the warmest year on record. Moreover, there are excellent prospects that 2015 will break that record – the past 12 months through June 2015 are indeed the warmest 12 months on record (see figure). It looks like the hiatus is over! 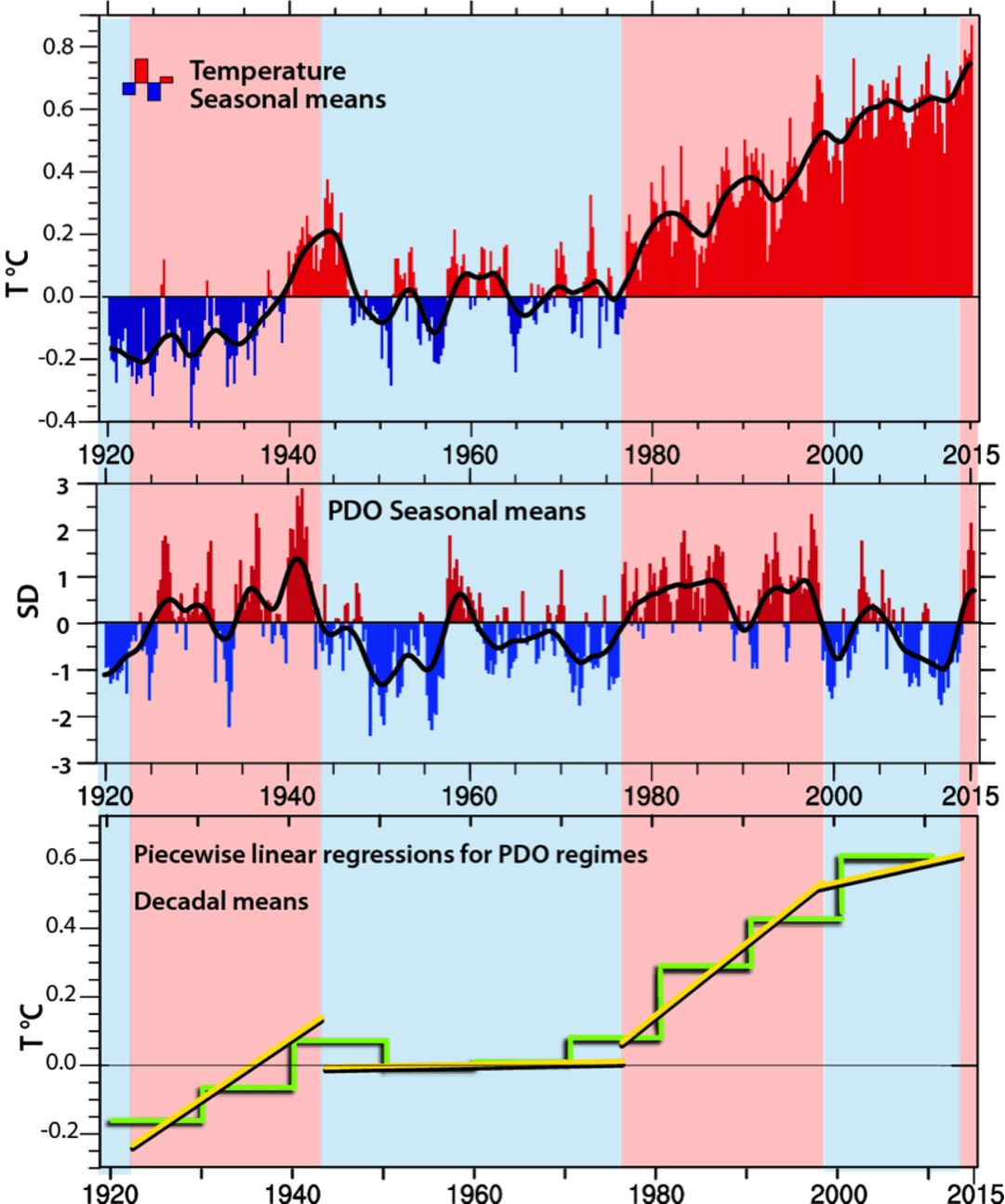 A closer look at the events during these hiatus periods sheds light on the role of natural variability on the long-term trend of global warming.

The year 1998 was the warmest on record in the 20th century because there was warming associated with the biggest El Niño on record – the 1997-98 event. Prior to that event, ocean heat that had built up in the tropical western Pacific spread across the Pacific and into the atmosphere, invigorating storms and warming the surface especially through latent heat release, while the ocean cooled from evaporative cooling.

Now, in 2015, another strong El Niño is under way; it began in 2014 and has developed further, and in no small part is responsible for the recent warmth and the pattern of weather around the world: the enhanced tropical storm activity in the Pacific at the expense of the Atlantic, the wetter conditions across the central United States, and cool snowy conditions in New Zealand.

There is also strong decades-scale variability in the Pacific, known in part as the Pacific Decadal Oscillation (PDO) or Interdecadal Pacific Oscillation (IPO) – the former is Northern Hemisphere focused, but the two are closely related. The positive phase of the PDO pattern, which affects ocean temperatures, is similar to that of El Niño.

The PDO is a major player in these hiatus periods, as has been well-established by observations and models. There are major changes in Pacific tradewinds, sea level pressure, sea level, rainfall and storm locations throughout the Pacific and Pacific rim countries, but also extending into the southern oceans and across the Arctic into the Atlantic.

Results suggest that the Earth’s total energy imbalance – that is, the growing amount of the sun’s incoming energy trapped by greenhouse gases – is largely unchanged with the PDO. But during the positive phase, more heat is deposited in the upper 300 meters of the ocean, where it can influence the GMST. In the negative phase, more heat is dumped below 300 meters, contributing to the overall warming of the oceans, but likely irreversibly mixed and lost to the surface.

The internal climate variability can also be modulated by external influences, including the various human influences.

Increased warming from increases in heat-trapping greenhouse gases can be offset by visible pollution (in the form of particles called atmospheric aerosols), which are mostly also a product of fossil fuel combustion. Indeed, from 1945 to 1970 there were increases in pollution in the atmosphere arising from post-World War II industrialization in Europe and North America, especially over the Atlantic, and some volcanic activity that increased aerosols in the stratosphere. However, regulations in developed countries, such as the US Clean Air Act of 1970, brought that era to an end.

Climate model simulations and projections of GMST suggest that the signal of human-induced climate change emerged from the noise of natural climate variability in about the 1970s. Expected rates of change were very much in step with the rate observed from 1975 to 1999, but not the slower rate from 1999 on. (This is another reason to say there has been a hiatus from 2000 to 2013.)

Human-induced climate change is relentless and largely predictable, even though at any time and especially locally it can be masked by natural variability, whether on interannual (El Niño) or decadal time scales. But the predominant driver of the slowdowns in GMST is the PDO. There is speculation now as to whether or not the decadal variability has reversed – going to a positive phase (see figure). With this change and the latest El Niño event, the GMST is taking another step up to a higher level.

The role of natural variability paints a different picture than one of steadily rising global mean temperatures. Indeed, the combination of decadal variability plus a heating trend from increasing greenhouse gases makes the GMST record more like a rising staircase than a monotonic climb.