Is time ticking for coal

Business-as-usual will not work to combat climate crisis. Difficult targets must be set to reduce carbon emissions 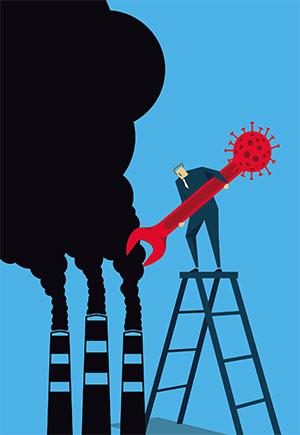 The world has been stuck with coal for years. The carbon-spewing fossil is still the biggest source of energy. The transport, manufacturing, construction and power industries are driven majorly by coal. But with 72 per cent of the world’s greenhouse gas emissions arising from the energy sector, it’s now time to kick this dirty habit.

Already, frequent and extreme weather events like cyclones, bushfires, floods and droughts have wreaked global havoc. The average atmospheric carbon dioxide (CO2) level has crossed the permissible 350 parts per million (ppm) to as much as 415 ppm.

If the world does not abandon its business-as-usual approach, global warming will rise to 1.5 degree Celsius above pre-industrial levels within just 10 years. This will have serious implications on natural and human systems. Global warming has already hit the 1.2°C mark.

The COVID-19 pandemic has given temporary relief to environment, but countries must not use it as an excuse to lower their ambitions to combat the climate crisis. Instead, the pandemic must work as the springboard to build back a better world.

In its special report on global warming in 2018, the Intergovernmental Panel on Climate Change (IPCC) had stated that staying within 1.5°C would require all coal-powered electricity to zero out by 2050. To achieve this, the more polluting older coal plants should be shut down first, says Climate Analytics, a European think-tank.

This means developed countries, who are the worst polluters, would have to make the initial transition. The think-tank prescribes that coal must be phased out globally by 2040. It has set 2031 as the deadline for 37 OECD countries (Organisation for Economic Cooperation and Development).

These countries are responsible for one-third of global emissions and their per capita emissions are twice the global average. Eastern Europe and Latin America should phase it out by 2031 and 2032, and non-OECD (Organisation for Economic Co-operation and Development) Asian countries have 2037 as their deadline.

So how is the world faring? In 2015, as many as 186 countries signed the Paris Agreement, which stipulates that global temperature rise must remain “well below 2˚C” by century-end. These countries have also submitted their Nationally Determined Contribution (NDC) targets. Yet, several are consistent with 3°C warming by 2100.

Each country is due to submit its updated NDC target this year. Eleven, which have already submitted these, are cumulatively responsible for 4 per cent of the total global CO2 emissions. Climate Action Tracker, an independent body that assesses emission reduction targets, finds the targets set by countries are mostly “insufficient” or “highly insufficient” for limiting temperature rise to even 2˚C, leave alone 1.5˚C.

In the United States, even the most ambitious climate plan, proposed by Presidential frontrunner Joe Biden, targets a carbon-free power sector by as late as 2035. The Russian Federation’s NDC target is “critically insufficient” to stay within the Paris thresholds.

Japan, the sixth-most polluting country, plans to install new coal-fired plants of 18 GW (gigawatt) capacity instead of shutting down the old ones. This would increase its existing coal capacity by 40 per cent. Japan’s energy minister Kajiyama Hiroshi says since it does not have the potential to develop renewable energy, it would provide technological and financial support. At present, Japan is the second-biggest funder of coal.

Norway has adopted a similar route. It has lowered its emissions but given billions of dollars to coal-mining firms.

Germany, the biggest contributor to carbon emissions in the European Union, aims to phase out coal by 2038. An equitable schedule would require the country to phase it out by 2030. So Germany’s 55 per cent emissions reduction target for 2030 is highly insufficient.

Big polluters like Australia, Indonesia, Mexico and South Korea have not even considered phasing out coal. Australia and Indonesia are the biggest coal exporters in the world.

China, the biggest contributor to carbon emissions, is on a totally different trajectory. It has an installed coal capacity of 973 GW (much of this underutilised) and plans to add another 199 GW. It is also the biggest international coal funder.

India may have started focusing on renewable energy but coal still provides over three-fourths of its electricity. It is constructing new 60 GW capacity coal-based plants and plans to build even more. So by 2030, coal will still have a major share in India’s power generation.

Studies show the reality is grimmer than suggested by IPCC. A 2020 study by Geneva-based World Climate Research Program shows that Earth’s atmosphere is much more sensitive to CO2 than perceived so far. It says the temperature rise caused by doubling of CO2 levels since pre-industrial times (estimated to be 260-290 ppm) would trigger 2.6°C to 4.1°C in average warming, putting the lowest rise more than one degree above scientists’ previous estimated range of 1.5°C to 4.5°C.

In another study published in Nature Scientific Reports, Thomas Chalk, a researcher at the University of Southampton, warns, “Our CO2 levels are rising at about 2.5 ppm per year, meaning by 2025 we will have exceeded anything seen in the last 3.3 million years.”

If the new NDCs are not serious about rapid phase-out of carbon-intensive energy, decades of planetary crisis await.

This was first published in Down To Earth’s print edition (dated 16-31 September, 2020)