Marine plastic pollution is reducing fish catch even as regular jobs have reduced, even for the educated

The fisherfolk of the port town of Kakinada in Andhra Pradesh are battling a triad of problems, which is eating away at their livelihood and making them despondent.

The problems include marine pollution that is reducing the catch in the sea, climate change that is causing coastal ingress and the unemployment in Kakinda and the villages around it that is arising as a result of the first two problems.

This correspondent was able to see these problems first-hand during a visit to the area for a media workshop organised by the MS Swaminathan Research Foundation (MSSRF).

“Plastic is playing havoc with marine life. Even fish that are six to seven kilograms in weight, are dying due to it. Fish catch has reduced by 75 per cent. Nearly 250 varieties of fish are going to be extinct,” N Babulu, a boat owner at the Kakinada harbour, claimed.

“We are not going to allow our children take up this job. After the agriculture and handloom sectors, fishing provides employment to the highest number of people in Andhra Pradesh. I employ 12 people on my boat and indirectly provide work for 150 people. But the sector is not getting any attention from the powers that be,” Babulu rued.

M Nookaraju, a trader, vouched for the fall in catch. “The number of tiger prawns has reduced. By this time of the year, 20-30 tonnes of prawns should have been caught. Instead, only five tonnes have been caught. Exporters are now banking more on fish and prawns grown in ponds. Pollution has reduced catch in the seas,” he said.

Besides plastic, other factors making fishing unviable include the lack of government support.

Even as dwindling catch has forced fishers to venture into the deep sea and utilise 8,000 litres of diesel, the subsidy being given is only for 3,000 litres.

The fishers are pinning their hopes on the expected announcement of an increase in subsidy to Rs 9 per litre. They also expect a rise in the volume of subsidised diesel to 6,000 litres.

The fisherfolk said plastic waste was being found even 40-50 nautical miles from the coast. “Plastic should not be flowing into the sea. There is no use of just banning single-use plastic. Recently a dead tortoise, when dissected, was found to have 104 plastic pieces,” Babulu said.

Unemployment among the educated is rampant in the fishing villages. Speaking to a cross-section of people, it became clear that parents had pinned high hopes on educating their children.

Raised away from learning the tricks of their traditional vocation, the educated unemployed youth have taken up other jobs like driving auto rickshaws and painting.

The nearly 100 factories around Uppada (a coastal village near Kakinada) are not employing the youth from our villages, says Venkateshwarlu from the village.

“I got my son to study in an English-medium school. The educated boys can neither go for fishing nor do they find jobs in industries. The government gave us pucca houses but we don’t have livelihood security. We are forced to sell fish raised in ponds rather than sea to make a living,” P Parvathi, a resident of Kobbarichettu peta in Tallarevu mandal near Kakinada, said.

People rued that only odd jobs like that of a delivery agent, which were not secure, were available in towns like Kakinada. 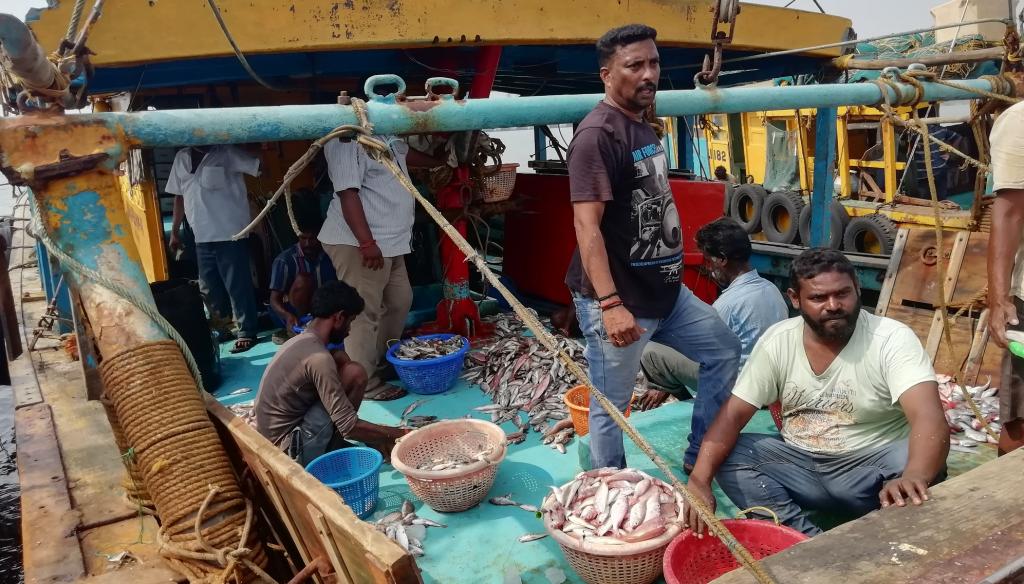 Andhra Pradesh has a coastline of 974 kilometres.

However, melting ice caps and rising sea levels mean the sea could become a bane rather than a boon.

The sea has encroached eight kilometres into the land, according to Kakinada’s older generation. New technologies like geo tubes were able to arrest erosion. However, the structures themselves have become denuded over time.

Given this backdrop, the residents in Kobbarichettu Peta in Tallerevu mandal and Uppada realise the importance of mangroves. The 1996 cyclone, that claimed nearly 1,000 lives, increased awareness.

The locals themselves observed how mangroves had saved them. The efforts by the MSSRF also bore fruit in educating the villagers. “People became part of the efforts in conserving mangroves and even planting them in some areas,” R Subramanium, principal co-ordinator of MSSRF, said.