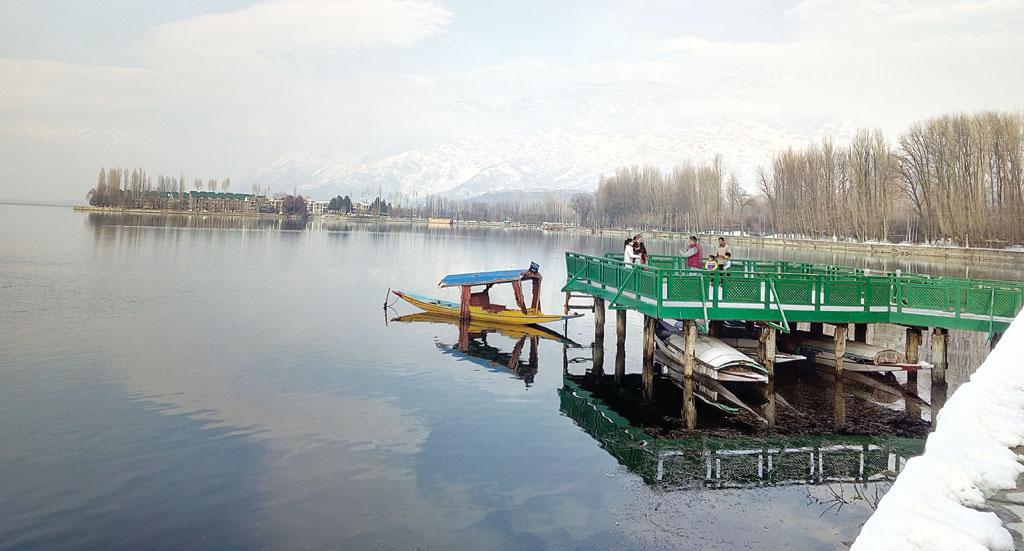 A solitary shikara waits for tourists on Dal Lake on a sunny afternoon in January 2017. Snow is the central attraction of winter tourism (Photo: Zehra Mohammad)

In 2016, Kashmir witnessed its lowest rainfall in 14 years along with low snowfall. The water levels in the Jhelum river also reached a 61-year-low. Meteorologists say while the rainfall levels in 2016 can be considered an aberration, the steady increase in the valley’s winter temperatures is a cause for concern. This, in turn, leads to lesser snowfall in the area and a thinning snow cover.

The low rainfall does not suggest a permanent change in the valley’s rainfall pattern, but the extent of the deficit is definitely worrying. Data from the meteorology department in Srinagar suggests that in 2016 Srinagar received just 3.6 mm rainfall, which is four times less than 2007, the last time the rainfall levels dropped substantially. Similarly Gulmarg, one of the valley’s popular winter tourist destinations, received just 1.2 mm rainfall in 2016, which is 40 times lower than the 48.4 mm rainfall recorded in 1998. “Kashmir witnessed an extreme dry spell in 2016. For about six months (between July and December), there was no rainfall,” says Sonam Lotus, director of the meteorological department in Srinagar.

He adds that the instances of extreme weather are increasing in the valley. “Just two years back, 173 mm rainfall was recorded in just one week in early September,” says Lotus, referring to the 2014 floods in Kashmir that left 300 dead and caused losses worth Rs 21,198 crore. The valley also received its thickest snowfall in 25 years in January 2017. In just one month, 162 mm of precipitation, mostly in the form of snow, was received. The average precipitation in January in the past 30 years has been 62 mm. But this was preceded by years of low snowfall.

Too hot to snow

The steady rise in the maximum and minimum winter temperatures is another concern. “Now the temperature in winters is not conducive to snow formation on most days and, as a result, we are witnessing rainfall instead of snow even in peak winters,” says Shakil A Romshoo, who heads the department of Earth Sciences at the University of Kashmir. Quantity of snow fall has reduced across the state.

Romshoo recently co-authored a paper published in the international journal Environmental Monitoring and Assessment about the average maximum winter temperatures in the valley’s popular hill stations, Gulmarg and Pahalgam. The paper suggests that the winter temperature has increased significantly since 1981 (see ‘Winters aren’t same’). The average maximum winter temperature in Gulmarg has risen from 1.92 oC in 2001 to 2.17 oC in 2010. Even the average temperature in Kashmir has increased by 1.2 oC between 1980 and 2010. In contrast,the hundred years between 1879 and 1979 registered an increase of only 0.7 oC. The paper suggests that by 2098, the valley will grow warmer by 6.26 oC. “The fragile mountainous regions are more sensitive to global warming than the plains,” says Romshoo. The 2016 State Action Plan on Climate Change (SAPCC) says the quantity of snowfall has reduced in the valley. Srinagar’s Fakir Gujri area, for example, receives just 0.60 m of snow today as compared to 3 m about 40 year ago.

The impact of warmer winters is already showing. Meteorologists say that not only has the snowfall decreased, but the time period for which the snow covers the upper reaches of the valley is falling drastically, leaving a more intense impact on glacial resources. SAPCC suggests the current climatic condition indicates that glaciers will continue to shrink even without further temperature increase.

“The Kashmir Himalayas have witnessed accelerated melting of the glaciers in the past six decades, resulting in substantial loss of the glacier mass. Consequently, we are witnessing depleted stream flows in the rivers,” says Romshoo.

In December 2016, the early melting of the snow, along with low rainfall, pushed the water level in the Jhelum river to a 61-year-low. Its water level ebbed to -0.5 metres at the Sangam monitoring station, as per the Department of Irrigation and Flood Control. Meteorologists say the reason Jhelum’s water levels dropped is that the valley’s snow cover now starts to melt even before the summers. As a result, little snow is left to melt in autumn because it has already run off in the spring and summer seasons. “With a significant loss of glaciers and scanty snowfall in the region, the stream flows will continue to decline, affecting irrigation and energy generation downstream,” Romshoo says.

The changing weather is altering the farming pattern in the valley. People are shunning paddy for horticulture because the amount of water available for agriculture in summer has substantially reduced, says Mukhtar Ahmed, agro-meteorologist with the meteorology department in Srinagar. “Since 1972, there has been a reduction of almost 1,000 sq km under paddy in Kashmir. Most of the new land has been used for horticulture or construction,” says Romshoo. The area under orchards has increased by 92.44 per cent from 214.92 sq km in 1972 to 413.38 sq km in 2010, suggests a 2016 study by the Department of Earth Sciences titled ‘Massive land system changes impact water quality of the Jhelum River in Kashmir Himalaya’.

The decline in snowfall has also impacted the tourism sector. Data from the state tourism department suggests that the number of tourists that visited the valley in December 2016 was 32,481, a drop of 60 per cent from the same period in 2015. Officials in the tourism department say the dip could be attributed to the cash crunch and unrest in the valley, but they do not negate the role of the decreasing levels of snow in the winters. “Travellers find romance and adventure in the snow. And Kashmir has for long been their first choice,” says Shamim Shah, chairperson, Travel Agents Association of India (J&K Chapter) . “Snow is the central attraction of winter tourism and without it, winter tourism is an empty package.”

“For us, a good winter tourist season is when entire families visit Kashmir, which is possible only during the holidays between Christmas and New Year. But why would they come to Gulmarg if there is no snow,” says Manzoor Sidiq, president, Travel Agents Association of Kashmir. He is hopeful that the heavy snowfall in January 2017 will help the sector recover.

Lotus says that snowfall not only has a direct relation with livelihood but is also important to replenish the glaciers. “And melting glaciers is not a myth. It is happening,” he says
.