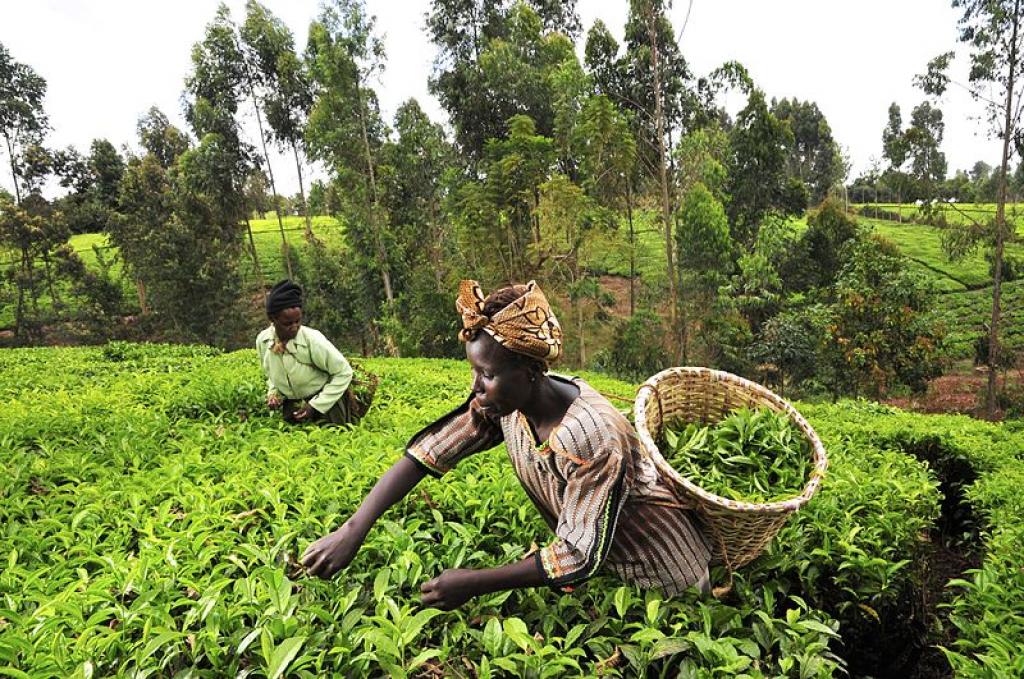 As erratic rainfall and plummeting crop yields beleaguer dozens of small-scale farmers in rural Kenya, some crop farmers in Nakuru, 150 kms from the capital Nairobi, are unperturbed.

Under a hot sun, bathes an idyllic farming village—Munyu—where Patrick Ndung’u harvests several kgs of bulb onions, potatoes and vegetable before packing them in bags for the market. The farmer grows the crops on a five-acre plot of land on rotational basis and he can comfortably harvest the veggies throughout the year, earning him Sh4,000 (USD 40) a week despite the scarce rains.

Munyu village is dry and semi-arid and lately, the weather has become so unpredictable that many farmers who rely on rain-fed agriculture can no longer tell when the time is ripe to plant. Sometimes the rains are so heavy that farms are flooded, while other times the land it baked with harsh droughts that wither away all plants.

In 2015, when parts of Kenya including Nakuru was hard hit by severe drought, thousands of farmers recorded incurable losses as their crops were decimated under the scorching sun. Ndung’u, who had planted Irish potatoes on a three-acre land, was among the worst affected. “I could not even look at the farm. All the potatoes were destroyed. But this taught me a good lesson,” said the farmer.

After the incident, Ndung’u sub-divided his five-acre farm into small plots of one-eighth of an acre to grow a variety of crops. He adopted conservation agriculture which ensures minimum tillage so that his farm retains moisture for a long time. But most importantly, Ndung‘u and fellow farmers in the village formed a self-help group of 35 members with an aim to dig water pans at every farmers plot to harvest and store surface water run offs which they use to irrigate their farms.

Ndung’u said he grows red and white bulb onion which he only waters twice a week since they are drought-tolerant crops. “White bulb onions are high in demand so I prefer them over the red ones. I sell them at Sh70 a kg, while red ones go for Sh50,” he said while adding that he doesn’t hustle for a market since traders come to the farm.

Kariuki Wachira, Ndung’u’s fellow farmer, reckoned that it took them almost a week to dig a water pan in every homestead. However, he said, that is nothing compared to the challenges they go through during severe droughts. “As small-scale farmers, we found hiring labourers to dig water pans quite expensive. So we decided to come together to do the work ourselves,” said Wachira.

“Once a water pan, which measure 20x20x3 metres, has been dug, an ultra-heat treated polythene sheet is spread on its base to prevent water from seeping under the ground,” he added.

Members like Ndung’u have water tanks, which store water once it is pumped into them and then it can be used for irrigation. They have also acquired drip irrigation kits, which minimise water wastage by ensuring that water is directly fed to the crop roots.

Irregular rainfall and water scarcity continue to pile pressure on sustainable food production in many countries across the continent, and climate change experts warn that the situation will only get worse as the population grows.

Kenya’s current per capita water is less than 600 cubic metres, which is below the global threshold of 1,000 cubic metres, making it one of the most chronically water-scarce nations. But, a recent study conducted by the World Agroforestry Centre and the United Nations Environmental Programme (UNEP) shows that Kenya’s rainwater potential is above 350 billion cubic metres, which raises hopes for local farmers investing in rainwater harvesting.

Victor Gitonga, a water engineer at Netherlands Development Agency-Kenya (SNV), said farmers can increase their farm productivity by at least 20 per cent by increasing water storage and use of technologies such as lined ponds, drip irrigation and solar-powered water pumps.

Farmers will increasingly need to rely on water storage as part of the adaptation agenda, said Jeremy Bird, the managing director of the International Water Management Institute that notes the new efficient irrigation technologies such as drip and sprinkler irrigation. “It is important to increase investment in a range of water storage techniques, including banking groundwater during the wet season, harvesting rainwater and storing water in the ground by conserving soil moisture,” said Bird.

As unpredictable weather and natural disasters such as floods and droughts become more frequent and more severe, small-scale farmers are coming up with alternative measures to enhance their resilience. Such alternatives also include acquiring new farming techniques and new crop varieties.

Peter Ndabi, a small-scale farmer in Makueniin, the arid Eastern Kenya, is one such farmer who had to give up his old practice of growing maize to take up growing legumes. For many years, Ndabi, 53, grew maize, a popular stable food crop in the country, but frequent dry spells denied him of any reasonable harvest. “This area is very arid so we cannot rear dairy cows, and have no option but to do crop farming. It is, however, very painful when you buy, invest a lot of energy and resources only to harvest 25 kg of maize from a three-acre plot,” he said.

Following the devastation, the farmer not only switched to the drought tolerant green grams and pigeon peas but also adopted a new ploughing method. “Nowadays, I plough my farm with a chisel-shaped plough known as the spring plough which is able to dig deep into the soil beyond the hard pan. This increases rain water infiltration into deeper soil layers,” he explained.

The farmer learnt about the new farming techniques at a farmers’ training session conducted by the state department of agriculture and Farm Input Promotions Africa (FiPS-Africa), a non-profit promoting new farming technologies in the arid area.

The legumes mature within two-three months and the harvest is better compared to maize, the farmer said. “I sell a kg of legumes at Sh150 (USD1.50) and I can, therefore, use that income to buy maize for my household,” said Ndabi.

Prof Micheni Ntiba, a former permanent secretary in the ministry of agriculture, said with emergence of climate change, farmers, researchers and governments need to rethink their approach to agriculture. “There are seasons when crops perform very well, but when they are just about to harvest, heavy rains come causing the damage, especially to grain crops such as miaze, bean and peas. So, climate change is not only responsible for affecting crop yields but post-harvest losses as well,” said the expert.