Kerala floods reveal the horror that is climate change

Kerala’s worst floods, which were a disaster caused by climate change, were made deadlier by local environmental degradation and absence of disaster preparedness 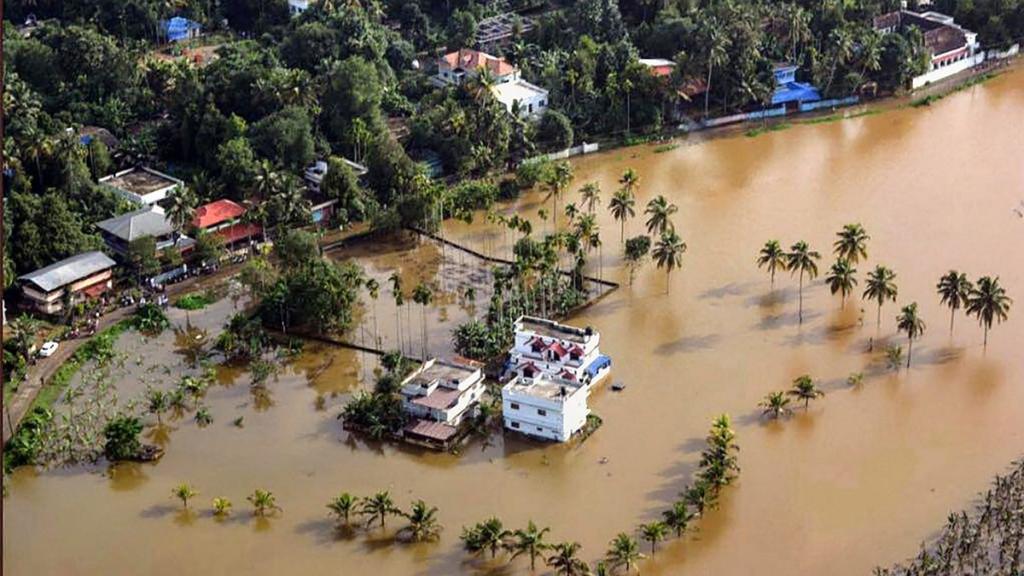 Never before has a flood devastated the entire state. Credit: Rejimon Kuttappan

On August 19, for the first time in the past 11 days, satellite images of Kerala captured fractures in the cloud cover. The state government consequently lifted the red alert. The now fragmented clouds showed the devastation caused by the state’s worst floods in a century. Everybody had one question: was it normal?

“It is abnormal but not unusual,” says DS Pai, head of climate services division of the India Meteorological Department (IMD). Official response is always presented using the tact of terminology. Over 11 straight days of tempestuous rainfall, nearly 25 trillion litres of water fell on Kerala—an area of 38,800 square kilometres cramped with mountain ranges, third highest population density in the country and 44 rivers with 61 dams—with apocalyptic fury. Never before has a flood devastated the entire state.

The current floods were a result of a strange monsoon phase that defied normal rainfall pattern. On an average, Kerala receives around 3,000 mm of rains annually. Of this, the monsoon is responsible for slightly over 2,000 mm. But this year (by August 19), the state had already received 2,350 mm of rainfall despite the fact that around a third of the monsoon season is yet to come. According to IMD, Kerala received 2,346.6 mm of rainfall against a normal of 1,649.5 mm since the beginning of June—an excess of 42 per cent.

Typically, Kerala receives strong monsoon showers in June and July as the southwest monsoon gains strength, after which there is a lull in the latter monsoon months. While the first two months saw slightly above normal rains this year, the normalcy did not extend to August. Within the first three weeks of the month, the state received close to 500 mm of rains over and above the normal rainfall of about 290 mm. Of about half of the 760 mm rainfall the state got since the beginning of the month, close to 75 per cent was received in the eight days between August 9 and 17, representing a departure from normal by around 300 per cent for the time period.

The distribution of the Indian monsoon is directed by the location of the monsoon trough—a belt of low pressure caused by solar heating. The axis of this trough oscillates between the Himalayan foothills and central India. In its normal position, the trough extends from northwest India to the east coast close to Odisha and West Bengal. At this position, central India and the west coast get good rains. When the trough moves north, the monsoon is said to be in “break” phase and most of the subcontinent barring the Himalayan states receive little or no rain. The “active” phase of the monsoon is when the trough moves south of its normal position causing heavy and intense showers in the southern peninsula. Between August 8 and August 16, Kerala received two spells of widespread intense rains. The first spell of heavy rains in Kerala prior to August 10 was heralded by just such a system and was anticipated by monsoon trackers.

What came as a surprise though was the second spell of rainfall after August 14. The western end of the trough at the time was not stable and oscillated north-south of its normal position. The position of the monsoon trough helped the formation of an offshore trough that is responsible for most monsoon rains in the west coast. However, the instability of the monsoon trough resulted in only a feeble offshore trough. This atypical second spell of rains from August 13 overwhelmed the state by pounding the region that has the highest concentration of reservoirs in the state.

Between August 8 and August 15, each of the 14 districts of the state recorded much more than normal rainfall. The worst hit were the districts of Idukki (679 mm), Wayanad (536.8 mm), Mallapuram (447.7mm), Kozhikode (375.4 mm) and Palakkad (350 mm) each of which received rains that were  several times more than normal. The situation further worsened in Palakkad and Kozhikode with heavy rains recorded until August 18. “This year, the association of monsoon rains with trough position is not as strong as it is in most years. For one, the active-break cycle is not as stark as it is usually and we are seeing more and more extreme events even during the supposed break phase. While this is not unheard of, it is not the typical condition during monsoons,” says Pai. “The feeble offshore trough, off the western coast, is the reason for the high cumulative quantity of rain received by Kerala. While the offshore trough stretching from northern Kerala towards the rest of the west coast is not unusual, the recent rains in Kerala indicate that the offshore trough did not move. The strong monsoon winds converged over a single region and that is why the cumulative rainfall in Kerala has been so high,” says Akshay Deoras, an independent forecaster.

While the offshore trough is the reason for the rainfall, it is not the only determining factor in the distribution of rains. How monsoon winds move and bring rainfall is also heavily dependent on the formation of low pressure systems and depressions over the Bay of Bengal (BoB) and their movement over the mainland. Typically, low pressure systems develop over northern BoB, near the West Bengal coast, and move west-northwestwards. However, during the spate of rainfall in Kerala in mid-August, the low pressure system associated with the heavy rainfall formed closer to the Odisha coast. Subsequently, it moved west-southwestwards towards Maharashtra rather than the normal route that results in rains in central India and the Indo-Gangetic plains. “Generally, the depressions associated with such floods occur over the north of BoB. But this time it occurred over the south of BoB. Initial analysis shows that this might have anchored the monsoon westerly over Kerala. Normally, with the depression over the north BoB, the westerlies would have been towards the north of Western Ghats, with places like Mumbai receiving the heavy rains,” says Roxy Mathew Koll, a monsoon researcher with the Indian Institute of Tropical Meteorology.

This year, the formation and movement of depressions has been a matter of concern beyond the disastrous flooding in Kerala. The numbers of low pressure systems that have developed into depressions that influence the distribution of monsoon rains are below average this season. The climatologically average indicates the development of six well-marked depressions during the four monsoon months—one each in June and September and two in the months of July and August. However this year, the first depression was formed only in the end of July. With only a little more than a month left, only three depressions have formed so far in BoB and moved into the Indian mainland.

The reduced number of depressions has suppressed distribution of rainfall in the subcontinent and has contributed to the concentration of rainfall over four prolonged spells primarily in the west coast since the onset of the monsoon. Meanwhile, rainfall in the rest of the country thus far does not inspire confidence with only a fourth of the conventional monsoon remaining. Despite floods in six states, 41 per cent of India’s districts are still facing a rainfall deficit.