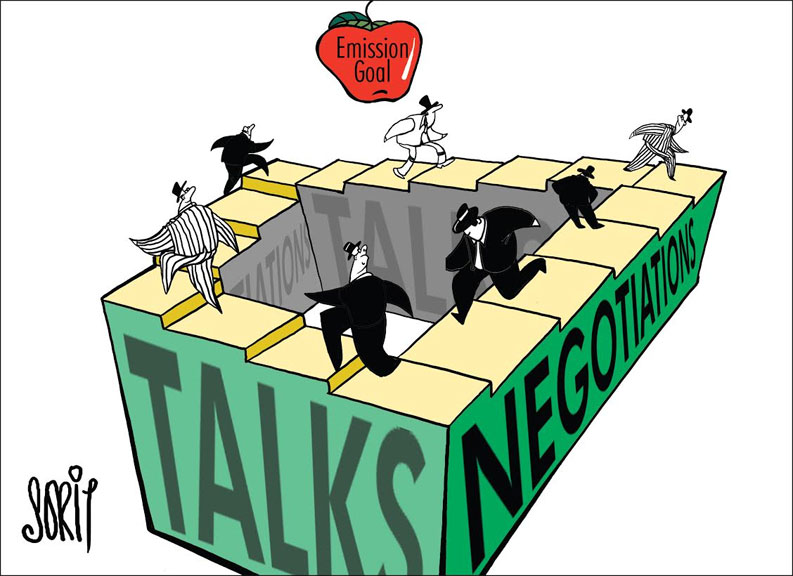 Facilitators convening the informal consultation groups submitted their progress report on negotiations in the evening stocktaking meeting. Earlier on Saturday, four informal consultation groups were constituted by COP president Laurent Fabius at the ADP concluding plenary to deal with four specific issues, namely –means of implementation (support of finance, technology and capacity building from the developed to the developing countries), differentiation (on mitigation, finance), ambition, and Work stream II (on pre-2020 actions).

Under means of implementation, facilitators report pointed out that better understanding of issues concerning climate finance has emerged. There was also broad consensus on support, mobilisation and scaling up of financial contributions by developed countries towards the developing countries. However, there were divergences on the mechanism to scale up the contributions. Parties also talked of cooperative mechanism for mobilisation.

To deal with differentiation, the mandate was to seek convergence on how this issue should be reflected in the new climate agreement as this is one of the most tricky issues. Discussions were held in smaller groups. There was a broad consensus that there would be no backsliding of climate efforts by countries. Developed countries assured that they would continue to take the lead on transparency – without backsliding, differentiation for flexibility, and by acknowledging that all the countries have different starting points.

On review of mitigation actions, while some parties suggested five years of taking stock, others stressed upon informing future climate efforts. There was also emerging convergence on increasing targets that should be not obligatory. This would imply that developing countries would also abide by voluntary actions like the developing countries, and thus the historical responsibility would not be taken into account.

In the stocktaking, the COP president also suggested constituting additional processes on other issues, including adaptation, cooperation, forests and response measures.

However, Parties including Russia, Egypt, Cuba, Venezuela and Tuvalu expressed concern about the process and mode of work as inconvenient and urged for greater inclusiveness, openness and transparency. Malaysia on behalf of the Like Minded Developing Countries (LMDCs) and Venezuela urged to focus on text that was agreed and adopted under the ADP and to refrain from discussions on concepts and positions of countries as time was running fast. In this regard, South Africa outlined a detailed proposal that basically talked about discussion on issues relevant for text, and insisted that changes in steps are required in the current mode of work, to request the facilitators to develop textual options based on outcomes of the ministerial discussions and also sought assistance from co-facilitators which were formed earlier under the ADP as they have in-depth knowledge.

Meanwhile, a cleaner text is expected to be out on Wednesday with fewer options under various segments and with compromised proposals.