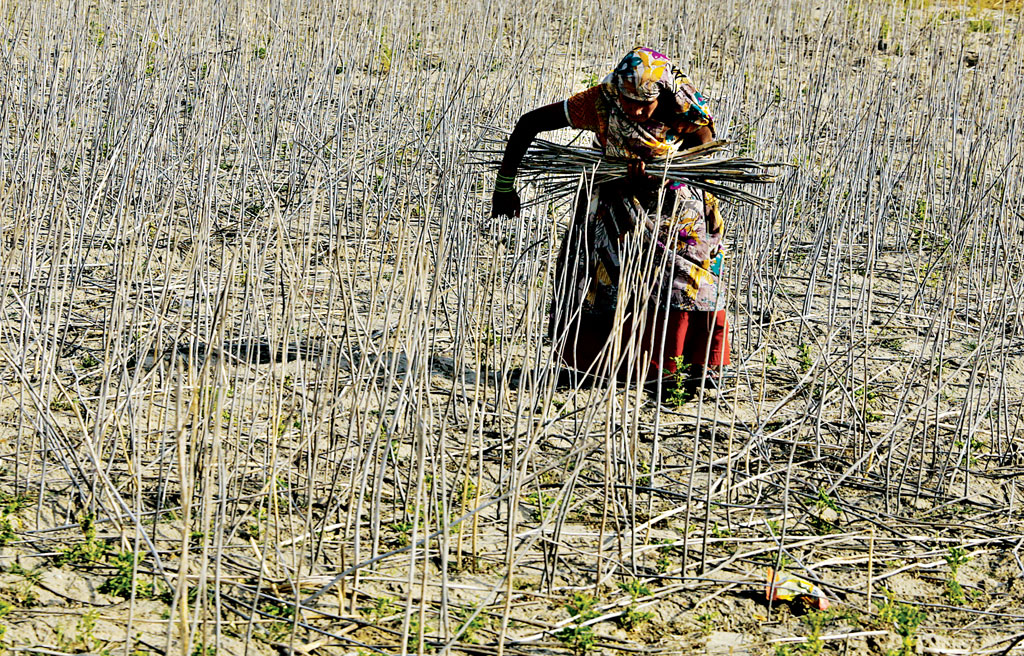 AS WORLD leaders congregated at Paris on November 30 to look for ways to mitigate the effects of climate change, an unusually strong northeast monsoon hit southern India for the third time in a month. The heavy spells of rain have affected standing crops of pulses, turmeric, onion, chilli, coriander and banana over thousands of hectares in the region. This is the seventh consecutive crop failure that most parts of the country have faced due to unforeseen weather events. Earlier this year, unseasonal rains and hailstorm had hit at least 15 states that produce over 80 per cent of the country’s foodgrains. And every time such a disaster hits the country, it pushes farmers into further distress, and ultimately forces them to commit suicide.

Such growing agrarian crisis due to climate change prompted Delhi-based think tank Centre for Science and Environment (CSE) to look for ways to protect the country’s farmers, who are mostly small-scale and marginal. On November 27 and 28, it held a national-level consultation with farmers, policymakers and activists, who suggested that the government must urgently address the growing grievance of farmers by introducing scientific ways of estimating crop loss and by providing universal crop insurance to small and marginal farmers.

Rely on science, not word of mouth

Crop loss assessment is the first step to offer any kind of relief to affected farmers. “But the existing method in the country is primitive and crude,” says Yogendra Yadav of Jai Kisan Andolan, a farmers’ rights movement. The government assigns the duty to a patwari or lekhpal (lowest-rung government official of the land revenue department) who has no knowledge of crops nor do they follow scientific techniques for assessing crop loss. Besides, on an average, a patwari has to assess 5,000-10,000 hectares. With multiple landholdings, ownerships and crop patterns, this would take over a month to physically verify the land and ascertain the damage. Since a patwari has to assess crop loss within two to seven days, in most cases, their assessment is based on guess work or information from friends. Devindra Pal Singh, tehsildar, department of revenue, Uttar Pradesh, says computerisation of land records can ease some of their burden. 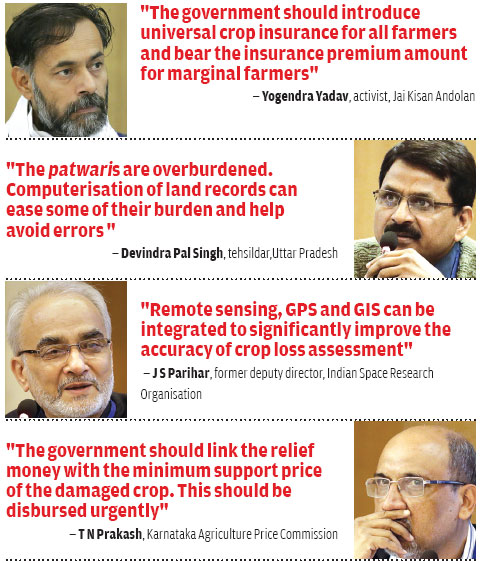 Remote sensing and technologies like global positioning system (GPS) and geographic information system (GIS) can significantly improve the accuracy of crop loss assessment, says J S Parihar, former deputy director of the Indian Space Research Organisation. But for this, the government must first computerise land records and data related to sown crops, and develop a colour index for different stages of plant growth, Parihar says. He adds that India has the capacity to increase the number of high-resolution satellites that can precisely monitor large swathes of farmland.

However, for accurate crop-loss assessment, experts suggest developing a method based on crowd sourcing. Farmers can use smartphones to upload photographs of their damaged fields, which will not only provide an idea of crop loss but also geographical location of the field and details of the farmer.

The government should improve its relief and compensation policy, which at present is non-existent or only on paper, says Yadav.

In case of a natural calamity, state governments distribute 10 per cent of their disaster relief funds among the affected farmers. More often than not, they receive only a sum of Rs 20-100. There is no clarity over how the relief amount is decided. Criticising the arbitrary nature of the policy, T N Prakash of the Karnataka Agriculture Price Commission, says the government should link relief money with the minimum support price of the damaged crop. “This should be disbursed on an urgent basis so that the farmer can use it to grow the next crop,” he says.

Crop loss and insurance compensation should be made justifiable to make it lucrative. For instance, suggests V M Singh of Rashtriya Kisan Mazdoor Sangathan, in extreme weather conditions, banks should waive off a sizeable loan amount, instead of deducting loan amount from insurance money. Experts also suggest introducing weather-based insurance schemes instead of crop-based insurance. To protect the interest of tenant farmers, they suggest introducing legislation on the line of Andhra Pradesh’s Licensed Cultivators Act, under which all tenant farmers in the state are given identity cards so that they can avail relief and compensation in case of crop loss.

On the occasion, CSE released a report “Lived Anomaly”, describing how to enable Indian farmers to cope with extreme weather events.