Need a revolution to save the Earth from climate change: Pope 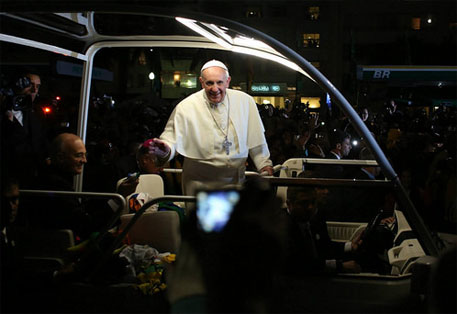 The Pope has asked the world’s rich to pay for taking concrete steps on climate change, warning that the failure to do so will cause “undeniable risk” to humanity.

In a sharply worded manifesto, he said climate change “represents one of the principal challenges facing humanity in our day” and blamed “intensive use of fossil fuels” and “deforestation for agricultural purposes” for the same.

“Climate change is a global problem with grave implications: environmental, social, economic, political and for the distribution of goods… Doomsday predictions can no longer be met with irony or disdain,” reads the manifesto.

“The foreign debt of poor countries has become a way of controlling them, yet this is not the case where ecological debt is concerned. In different ways, developing countries, where the most important reserves of the biosphere are found, continue to fuel the development of richer countries at the cost of their own present and future.”

“The developed countries ought to help pay this debt by significantly limiting their consumption of non-renewable energy and by assisting poorer countries to support policies and programmes of sustainable development,” reads the 180-page encyclical on the environment.

Citing a “very solid scientific consensus” that indicates that the world is witnessing “a disturbing warming”, Pope Francis called for a “bold cultural revolution” to halt humanity’s spiral into self-destruction. “There can be no renewal of our relationship with nature without a renewal of humanity itself.”

The Argentinean pontiff also applauds scientists for finding solution to man-made problems, and lashes out at those who intervene in the service of “finance and consumerism”.

“In the meantime, economic powers continue to justify the current global system where priority tends to be given to speculation and the pursuit of financial gain, which fail to take the context into account, let alone the effects on human dignity and the natural environment,” the encyclical reads.

He calls access to safe water a “basic and universal human right” and says depriving the poor of access to water is akin to denying the right to a life.

The Pope’s statement on July 18 came in the form of an encyclical, a letter traditionally addressed to the more than 1 billion Catholics across the globe. An encyclical is among the church’s most authoritative teaching documents. But Francis has set his sights beyond the circle of his church as he addresses the encyclical “every person living on this planet”. While not present at the conference, the Pope last week had said that he hopes his message will be embraced with an open spirit.

Interestingly, this is not the first time he has raised concerns over climate change. His statement made in January this year sparked a worldwide controversy and even divided conservative and liberal Catholics, particularly in the United States.

“I don’t know if it is all (man’s fault) but the majority is, for the most part, it is man who continuously slaps down nature,” he had told reporters during a flight from Sri Lanka to Manila.