Only 13 of 132 largest energy cos committed to net zero emissions: Study

The research reveals that the global energy sector has hardly achieved any progress in achieving the goals of the 2015 Paris Agreement, four years after it was signed

Four years after the Paris Climate Change Agreement was signed, the global energy sector is yet to make significant headway in achieving its goals, a new study has revealed.

Researchers from the London School of Economics, Oxford University and the Transition Pathway Initiative found in a survey that just 13 of the 132 largest publicly listed coal, electricity, oil and gas companies have committed to net zero carbon dioxide (CO2) emissions.

They surveyed management at 132  electricity, coal, oil and natural gas companies on the following:

Energy supply and use accounts for around 70 per cent of global greenhouse emissions.

A slim majority of those surveyed acknowledged that the Paris goals exist, which is a reassuring confirmation of reality, if one is not convinced by black and white text.

It gets progressively worse from there, with a majority refusing support for the goals, and an even larger majority rejecting the need to zero out emissions by the year 2050. 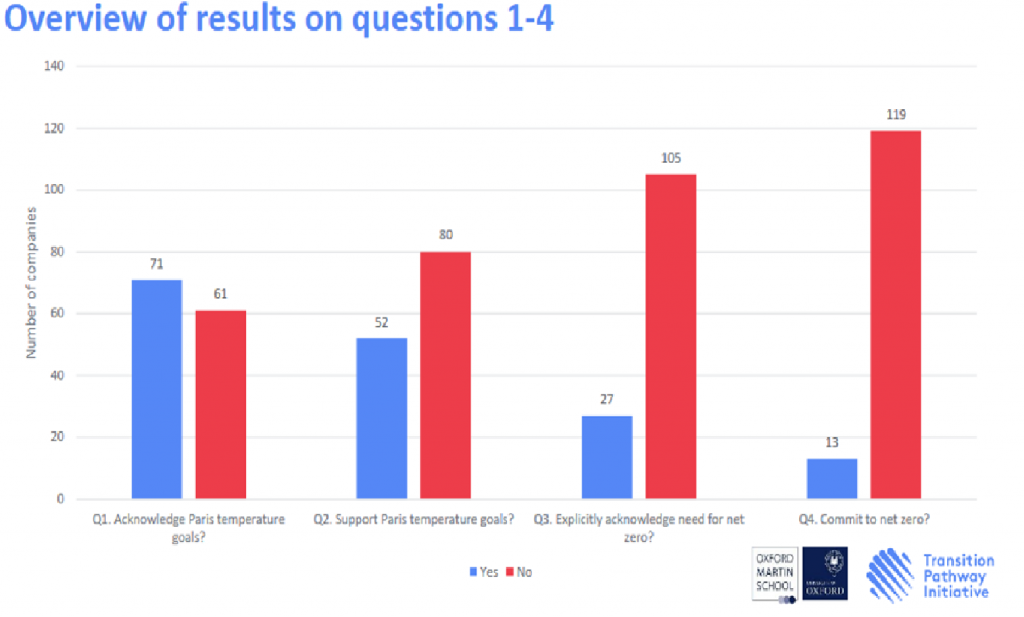 The Intergovernmental Panel on Climate Change (IPCC) was quite clear last year about the need to reach net zero emissions by 2050, in its special report on 1.5°C.

The share of renewables in the electricity mix needs to be between 70 and 85 per cent by 2050, with the share of coal needing to drop to 0-2 per cent.

The fact that there were any positive responses to the latter questions in the survey can be explained by four factors.

Firstly, the researchers surveyed quite a number of electricity (rather than fossil fuel extraction) companies — 62 out of the 132 surveyed in total.

Electricity businesses tend to be more agnostic to the source of supply, especially when discussing a wholesale energy transition which will affect the whole sector roughly similarly, and where costs are likely to be passed on to consumers (or taxpayers). 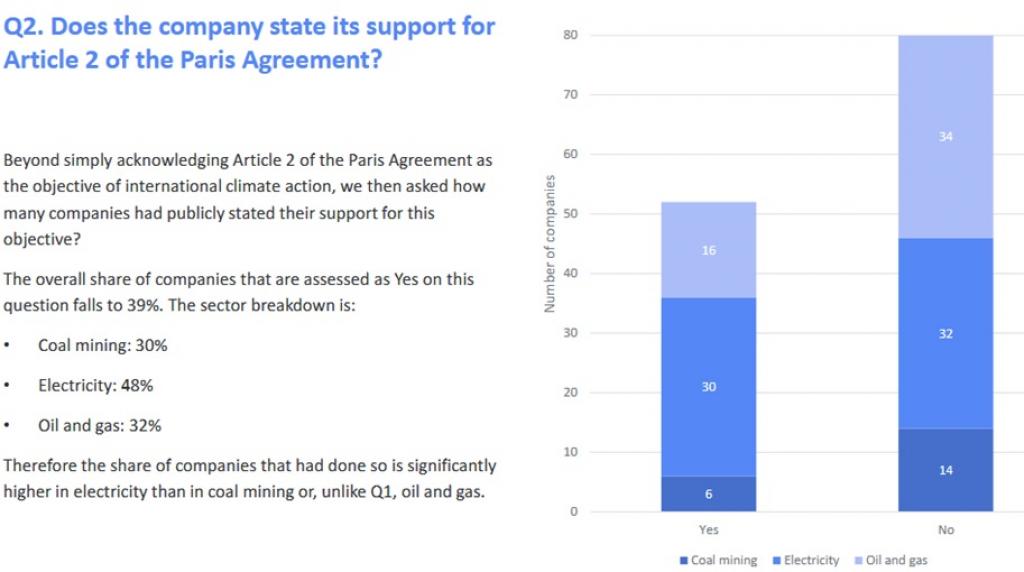 Second, while fossil fuel producers are more opposed to climate targets in general, there are some differences within them. Rapid decarbonisation implies coal use needs to drop much faster than oil and natural gas use. There is an ongoing effort to position natural gas, particularly, as a ‘bridge fuel’ to ease the transition to renewables. 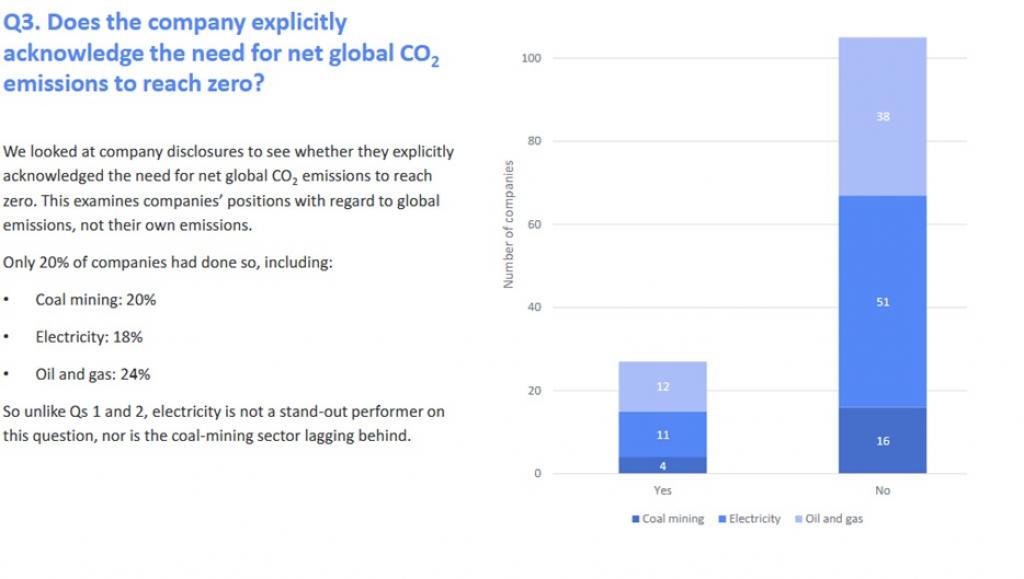 Third, there has been an increasing amount of shareholder activism pushing some companies to think about their role in climate change. Shell PLC, for example, has responded to such activism by publishing projections for its business taking into account the Agreement’s 2C goal. Other companies, like Exxon Mobil Corp, are far more hostile.

Fourth, fossil companies prefer to talk about reducing their emissions footprint in terms of their operations, not the use of their products. By that standard, there are some companies with internal net zero targets.

Emissions from extraction processes is part of the story, but the Paris Agreement is concerned with reducing fossil fuel use. The cooperation of major fossil fuel companies is likely to remain limited on this larger challenge. 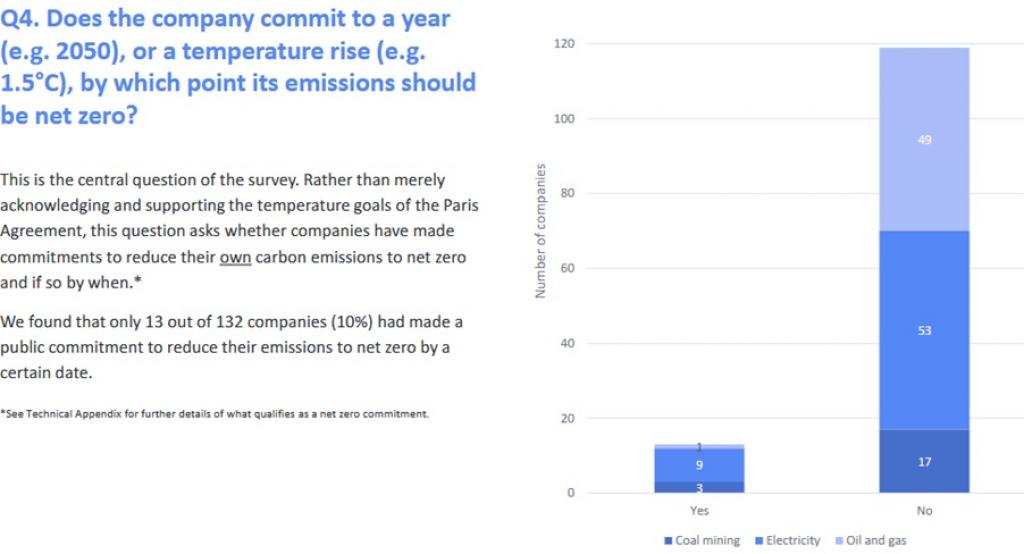