Women are the worst sufferers of the water crisis in Uttarakhand. Why are the hills going dry? 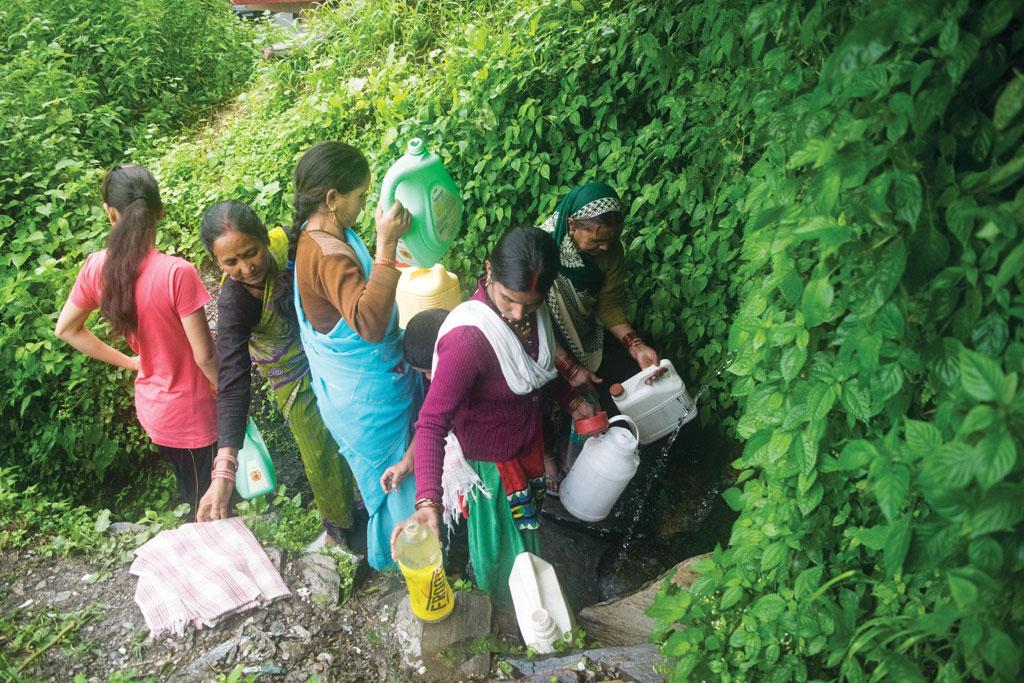 About 90 per cent of Uttarakhand's rural population meets its water needs from springs (Photo: Arpita Chakrabarty)

Rural Uttarakhand is facing an increasingly worsening problem—water shortage. Villages in its hills and mountains were never short of water, with springs and small streams dotting the region. But with changing weather patterns, the springs and streams are disappearing. And women have to bear the brunt of this crisis because they have to arrange water for the family.

Every day, Manju Devi, 32, has to make several trips down the hill to streams 3-4 km away to fetch water. Her village Raikholi in Bageshwar district is on a hilltop. The village has piped water but the supply is virtually non-existent. “Some-times, there is water once in five days,” says Manju, adding, “and the flow is such that it takes half an hour to fill a pot.”

Raikholi has 95 families and there is no hand-pump. The water demand is met from four springs on the other side of the hill. Of the four springs, two have run dry. The families queue up at the other springs from as early as 3:30 in the morning. “Whoever wakes up first in the village gets access to water first,” says Manju. Her children also help her carry water before and after they attend school. At the peak of the crisis in May and June, some families even used ponies and tempos to get water from places 20 km away. “But poor families like ours have to walk long distances,” says Manju Devi. “I worry about arranging for water all day.”

Manju’s story is similar to that of many other women of Uttarakhand who have to walk as much as 10 km everyday for water. As per the National Survey Sample Office (NSSO) data released in 2013, household members in villages in Uttarakhand spend, on an average, 43 minutes per day to fetch water from outside the premises. The national average is 35 minutes. Experts say more than 12,000 of the state’s 16,793 villages and more than half of its 115 towns are facing water scarcity.

“A third of my day is spent arranging water for the family. I fetch water in two 25-litre buckets, twice a day,” says Deepa Arya of Balta village in Almora district. Deepa’s village gets water from one tap shared by 27 families. The supply comes just once a week.

Long walks on hilly terrain have also made women develop muscle and joint problems. Though there is no study to ascertain the extent of the problem, almost all the women this reporter talked to in four hill districts of the state complained of back pain and knee problems. “I don’t have the time or money to visit the district hospital. It’s a 15 km walk,” says Deepa.

Though the heavy rainfall in the state in the first half of July has improved the situation, the relief is only temporary. Springs are crucial to Uttarakhand because they provide water to about 90 per cent of the state’s rural population. J S Rawat, professor at Kumaun University and director of the Centre of Excellence for Natural Resources Data Management, Almora, says, “Winter precipitation has been declining. There is no groundwater to recharge springs. The phenomenon of snowfall till March has vanished. So have slow, week-long rainfalls. These were common 20 years ago.”

Rawat has been studying the region for the past 20 years, tracking water availability and identifying springs that have dried. “Earlier we received rainfall 300 days a year. Now it is for less than 200 days,” he adds.

The water crisis witnessed this summer was mainly due to the relatively warm winter of 2015 and the scanty winter rainfall. For instance, the minimum temperature registered in Mukteshwar in January 2016 was -2°C, as compared to -4°C in January 2015. Winter rains, too, were scattered and negligible. The state saw a 46 per cent deficit in winter rain in January and February this year and almost 20 per cent deficit in pre-monsoon rainfall in March, April and May. Five districts, including four hill districts of Almora, Pithoragarh, Nainital and Pauri, were declared drought-hit in April.

Kireet Kumar, scientist at G B Pant National Institute of Himalayan Environment and Sustainable Development, Almora, who has extensively worked on watershed management and environmental assessment, says, “Due to warm temperature the soil is drying. When it rains, the water first gets stored in the soil and then the excess water percolates. But these days, the rainfall is heavy, erratic, and infrequent. To recharge springs, we need mild rains of long duration. We need snowfall and winter rains to recharge the groundwater for next summer.”

The change in snowfall and rain patterns has become quite common. For instance, Forti village in Champawat district, usually receives 0.6 m of snowfall every year. In 2015, there was none. The rainfall, too, was negligible. “We don’t have water to offer guests. The springs that provided water round the year have gone dry,” says Jagdish, who runs a tea shop in the village.

Landscape is not the same

Construction of roads has also aggravated the water scarcity in the state. The use of dynamites to lay roads has disrupted fissures and led to drying of springs. According to the Public Works Department, the state had around 7,440 km of roads in rural areas in 2000. In 2015, the figure increased to over 18,180 km.

Ill-management of water resources has also aggravated the crisis. The government only focuses on water distribution. When one source dries up, the water department connects the pipeline to another source. “No one thinks what will happen when that source also dies. The department doesn’t work on treatment of catchment areas to maintain and protect the source,” says Ravi Chopra, founder of Dehradun-based non-profit research organisation People’s Science Institute.

“Earlier, village residents looked after sources of water, planted broad-leaf trees and treated catchment areas (see ‘Water solutions’). However, now water from the same sources has been diverted to faraway schools, colleges and towns in pipelines. So the villages have lost the right to their water and they don’t look after forests and springs like they used to 20 years ago,” Chopra says.

S K Gupta, chief general manager of Uttarakhand Jal Sansthan, the state’s water department for the hilly region, gives another reason for water scarcity—rising population. “The population has increased, so the per capita availability of water has decreased. There are places which once had 40 litres of water per capita per day, but they now have less water because the population has increased,” he says. According to Gupta, the department spends nearly Rs 40 crore every year on maintenance of hand-pumps and pipelines.

Uttarakhand Jal Sansthan says it has installed 9,502 hand-pumps in the 10 hill districts of the state and there are 0.65 million pipeline connections. Village residents, however, complain that the government’s efforts are not enough and have not reached many areas. The department’s inefficiency can be gauged from the fact that it runs 4,269 schemes for rural areas but has not been able to fulfil basic water needs. Till the time the department starts managing its resources better, women in rural Uttarakhand will continue to suffer.

The story was published in the 1-15 August, 2016 issue of Down To Earth magazine.