Paris Agreement comes into force; first meeting of governing body may not happen 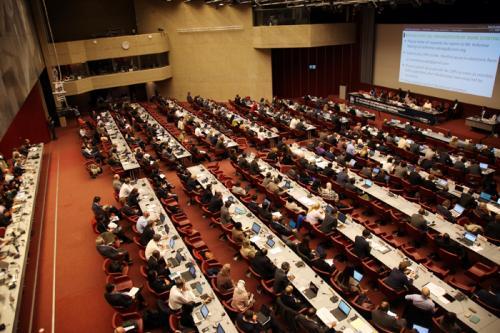 The Paris Agreement lays down the objective of limiting global warming to 2 degrees Celsius (ideally 1.5 degrees Celsius) by 2030. The objective is to be achieved through Intended Nationally Determined Contributions (INDCs) for reductions in greenhouse gas emissions. While the Paris agreement provides a broad framework, the specifics of implementation, monitoring and the establishment of new institutions remain to be detailed.

The promptness of the members of the agreement in ratifying it has been seen as a strong and positive political intent around the world to fight climate change. The statement by the UNFCCC announcing the agreement’s entry into force claims euphorically that the agreement is “undoubtedly a turning point in the history of common human endeavor, capturing the combined political, economic and social will of governments, cities, regions, citizens, business and investors to overcome the existential threat of unchecked climate change. Its early entry into force is a clear political signal that all the nations of the world are devoted to decisive global action on climate change…This is a moment to celebrate.” The statement, however, also calls for caution and recognises the steepness of the task of enforcing “unprecedented reductions in greenhouse gas emissions and unequalled efforts to build societies that can resist rising climate impacts.”

What to expect from COP22 climate change conference?

The COP22 climate change conference to be held in Marrakesh from November 7-18, 2016 shall also be the site for the first meeting of the members of the Paris Agreement’s governing body—the CMA. The meeting is scheduled to happen on November 15. As less than half of the signatories have ratified the agreement so far, it is highly likely that the CMA1 (first meeting of the CMA) shall be suspended. “During the pre-COP meetings held recently, it was decided that the CMA meeting should be suspended this year to allow time for other signatories to ratify the agreement and be a part of the decision-making process,” said Ravishankar Prasad, a Joint Secretary for Climate Change at the Ministry of Environment, Forest and Climate Change.

The UNFCCC statement, too, hints at 2018 as the year by when members are expected to complete the details of the “rule book” that shall decide the implementation of the Paris Agreement. But while it is highly likely that nothing shall be set in stone during CMA1, progress in negotiations on specifics regarding adaptation, loss and damages and financial flows is expected. The establishment of institutions to coordinate capacity building and technology transfer and development, as well as a review of the finance mechanism, is likely to happen at the COP22 and CMA1 meetings this year, according to officials at the MOEFCC.

One of the talking points during this year’s COP is likely to be the financial mechanism at play for climate change action and specifically, target of mobilising US$100 billion from developed countries towards developing countries by 2020. The Organisation for Economic Co-operation and Development (OECD) has released a roadmap detailing the mobiliSation of about $67 billion from national commitments and further $22.8-25.5 billion from private entities by 2020.

While the roadmap details a doubling of the adaptation fund by 2020, critics have pointed out that the roadmap relies heavily on market-based loans and export credits which should not count as funds. According to Prasad, “The roadmap released two weeks ago relies on a similar methodology as the OECD-CPI report published last year, which was problematic for India. The ministry is currently vetting the roadmap and a rebuttal for the same shall be expressed soon.”