Paris Agreement inches closer to entry into force this year 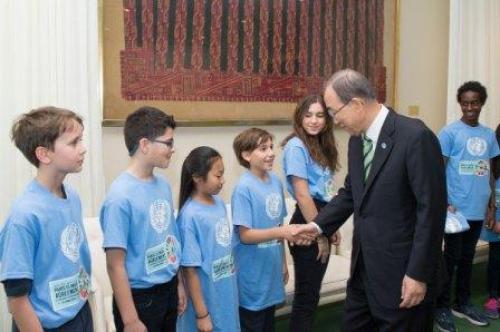 At a special event hosted by United Nations Secretary General Ban Ki-moon in New York on September 21, 31 more countries formally ratified the Paris Agreement, paving the way of its early entry into force this year.

Brazil, Mexico, Singapore, Solomon Islands, Sri Lanka, United Arab Emirates and Morocco are among the new entrants. This takes the total number of countries which have formally joined the climate agreement to 60.

Hailing the event, the UN Secretary General said, “This momentum is remarkable. This is testament to the urgency of the crisis we all face.”

For the Paris Agreement to enter into force, at least 55 Parties covering at least 55 per cent of the global greenhouse gas emissions are required to ratify the pact.

Currently, 60 nations have ratified the agreement, accounting for almost 48 per cent of the global emissions. So, one of the two thresholds for the Agreement’s entry into force has now been met with 55 Parties joining it.

The other threshold is likely to be reached soon as, in addition to 31 new countries joining the Agreement, 14 more Parties representing 12.58 per cent of emissions, have also committed to join the agreement this year.

These include the European Union, France, Germany, Hungary, Kazakhstan, New Zealand, Poland and the Republic of Korea, who are in the process of completing their domestic approval processes.

If they keep their commitment, it implies that the Paris Agreement could officially enter into force along the same time as the forthcoming Conference of Parties in Marrakesh to be held in Morocco from November 7-18, 2016.

The Paris Climate Agreement was adopted by 195 Parties to the UN Framework Convention on Climate Change (UNFCCC) on December 12 in Paris. It replaced the Kyoto Protocol which was signed in 1997 and came into force in 2005.

The early entry into force of the agreement will trigger operational provisions of the agreement. These include creation of the rule book for operationalisation of climate finance for developing countries, laying down rules for global stocktake of climate actions, market mechanisms and several other elements.

Speaking about the broader vision of a climate resilient and sustainable future which requires constant and updated efforts by the Parties, Patricia Espinosa, the executive secretary of UNFCCC, said, “The adoption, signing and ratification of the Paris Agreement are wonderful news but by no means the end. Securing a climate-safe world and supporting the realisation of the Sustainable Development Goals is a multi-decadal effort of constant improvement.”