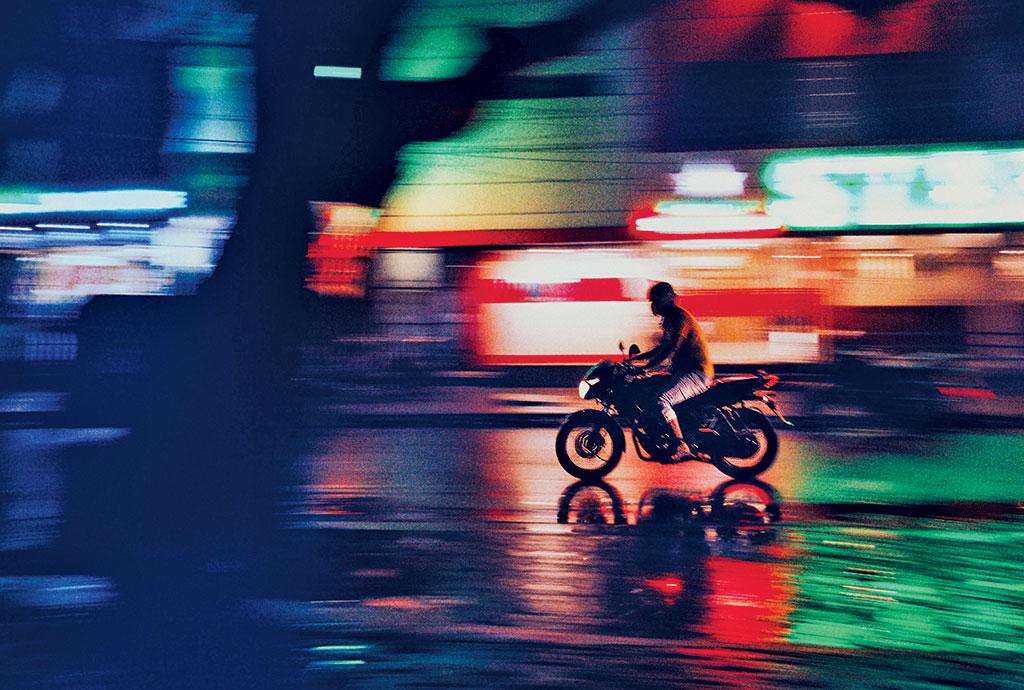 On January 6, Chennai saw the highest rains recorded in the month in a century after 1915 (Photograph: Sharan Chandar)

Southern India was deluged by unusually heavy rainfall in the first 17 days of the New Year. Tamil Nadu received almost 10 times more rainfall than normal. All its 38 districts experienced large excess rainfall — 60 per cent over normal, according to the India Meteorological Department.

As a result, one million hectares of standing crops were submerged, said PR Pandian, president of the Coordination Committee of All Farmers Associations of Tamil Nadu. As many as 16 districts received 10 times (or more) the normal rainfall. The most excess was seen in Tiruppur district with almost 20 times the usual rainfall.

The story was similar in Kerala and Karnataka with 19 and 12 times the normal rainfall for both states respectively, for this time of the year. All districts in Kerala had large excess rainfall with the highest being in Kasargod and Malappuram, where the rainfall was 100 times the normal. In Karnataka, however, some districts did not receive any rainfall.

While the jury is still out on what might have caused the winter rain, scientists think a weather event that took place close to 8,000 km away in the Arctic could have the answer.

“The polar sudden stratospheric warming or SSW is one of the reasons for the high rainfall in the tropics this year. We need a detailed study, especially of the science and dynamics behind this phenomenon, to understand the link better,” said Remya Raveendran, researcher at the Advanced Centre for Atmospheric Radar Research, Cochin University of Science and Technology, Kochi.

On January 5, the Arctic region recorded an SSW event that takes place in the stratosphere, the second major layer of our atmosphere that starts roughly 50 kilometres from the Earth’s surface. During such events the temperature of the stratosphere can increase by up to 50 degrees C within 10 days.

The warming impacts the stratospheric polar vortex, a fast blowing band of winds that forms over the Arctic region during the winter season due to reduced solar radiation.

“In extreme cases, the polar vortex flow weakens dramatically and sometimes even reverses,” said Marlene Kretschmer, a scientist at the meteorology department of the University of Reading in the United Kingdom. The last SSW event happened in 2019 during which the polar vortex split into three smaller vortices releasing cold winds into the southern regions.

“These disturbances in the stratosphere sometimes cause circulation anomalies in the troposphere — the atmospheric layer where weather is generated. For instance, after SSWs, one often observes a meandering and southward shifted jet stream in the troposphere, causing colder winter weather in Northern Eurasia and the northeastern United States, as well as increased storminess and precipitation in the Mediterranean region,” said Kretschmer.

SSW events are regular but non-periodical. No SSW events were reported between 2013 and 2018 (see ‘A decade of warming Arctic stratosphere’). 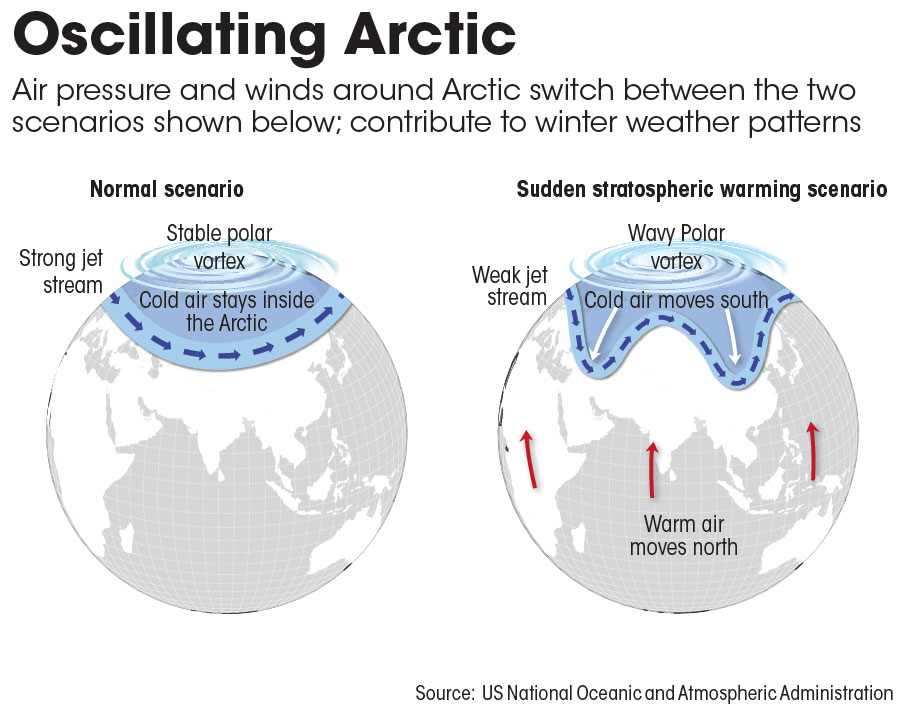 SSW occurs in two phases — easterly and westerly — based on the direction of the planet it impacts. In July 2017, Raveendran and a few other researchers published a paper in the Journal of Atmospheric and Solar-Terrestrial Physics where they claimed that easterly SSWs have a stronger cooling effect over north India than its westerly phase.

It adds that an easterly SSW event increases the speed of the western disturbances, an extratropical storm originating in the Mediterranean region that brings sudden winter rain to the northwestern parts of the subcontinent. This, the paper explains, translates into intense winters in North India.

Raveendran and the other scientists have recently submitted another paper to the journal Earth and Space Science where they have analysed 20 SSW events and rainfall data over the past 36 years in Kochi. They found that five to six days prior to the peaking of polar SSW (January 5 in the case of the current event), there is a change in the wind patterns in Kochi’s troposphere along with unusual rainfall in the city.

The paper claimed the impact of an SSW event is also felt in northern India. For example, in the first week of January 2021, Delhi received three times more rain than the normal for the entire month. While the primary reason is the western disturbance over central Pakistan, the group of scientists hint that SSW might have added a zing to the same.

After the SSW event on January 2, 2019, a flurry of western disturbances had brought down the temperatures throughout north India.

Though a natural phenomenon, scientists stumbled upon SSWs only about 70 years ago, and as a result their understanding of it is limited. Regular data from observation stations is available only from the 1950s and global satellite data from the late 1970s.

The first mid-winter stratospheric warming was observed in 1952 by meteorologist Richard Scherhag in Berlin, who initially considered this huge rise in temperature within a few days to be a measurement error, according to a lecture delivered by Christoph Zuelicke, part of the Matrix Group at the Leibniz Institute for Atmospheric Physics, University of Rostock, Germany.

Despite the sparse availability of data, scientists are getting interested in studying SSW because of its crucial role in global terrestrial and space weather.

“Analysing the effect of SSWs and polar vortex in general is important as it is a major driver of northern hemisphere winter weather, responsible for a variety of extreme weather events and related impacts,” said Kretschmer.

Scientists are also trying to understand how climate change is going to shape SSWs as the Arctic region is already showing definitive signs of global warming.

But Kretschmer argues that there is still uncertainty about how the future SSW events will be impacted by climate change.

“Some climate models project a weakening of the vortex while others project its strengthening. The reasons for this model disagreement are not fully understood,” said Kretschmer. She pointed out that one active research hypothesis is that sea ice loss in the Barents and Kara seas in the Arctic weaken the polar vortex.

“Next to sea ice, there are other drivers in the climate system which can affect the polar vortex and might cause changes of it in the future. As the different drivers are partly competing it is not clear yet how the polar vortex will change,” she adds.

If the polar vortex strengthens in the future (which means less SSWs) the drying of the Mediterranean region will be faster and extreme storminess in northern Europe will increase. In this scenario it would result in milder winters for northern Eurasia.

If the vortex weakens (which means more SSWs), opposite patterns would be the case and the cooling effects of SSWs in northern Eurasia could partly dilute the expected effects of global warming in winter in these regions. Whatever happens in the future, some parts of the world, including India, are going to experience an increase in extreme weather events such as cold waves and extreme rainfall.

This was first published in the 1-15 February, 2021 edition of  Down To Earth