An unusual warming event over the Antarctica that has soared temperatures in the South Pole by more than 40 degrees Celsius is driving record-breaking warm temperatures in Australia, according to meteorologists.

This rare phenomenon, known as sudden stratospheric warming, occurs when rapid warming begins high up in the stratosphere — second major layer of Earth's atmosphere. The rapid heating, which began in the last week of August, spiked temperatures in the Antarctica to minus 25°C from close to minus 70°C, according to Australia’s Bureau of Meterology (BOM).

“It has leapt up more than 40 degrees warmer than normal in the course of three weeks,” BOM climatologist Andrew Watkins was quoted as saying to an international news agency. The BOM has also predicted the strongest Antarctic warming on record, after September 2002.

This can trigger hot, dry winds across Australia over the next three months, impact rainfall and worsen droughts in the continent, the BOM noted.

Dry and windy conditions are likely to increase the fire threat in a number of regions, with 15 fires already burning in the south-east region, media reports said.

“The month of October has a high chance of being drier than average for virtually the entire country. This also means there’s an increased chance of early heatwaves and windy days will see higher fire danger,” Watkins revealed. The impact may be felt in Australia through to the end of the year, he noted. 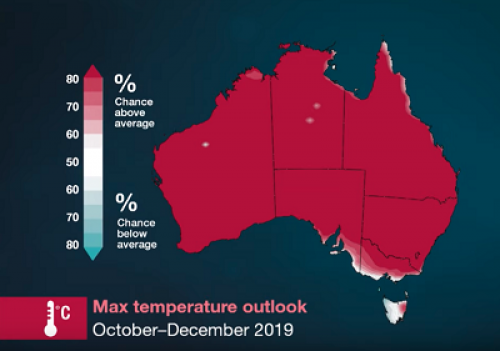 While the sudden stratospheric warming is common and occurs every second year on average in the northern hemisphere associated with cold weather, it is a rarity in the southern hemisphere.

“The events typically start towards the end of winter, when mountains or the contrast between warm ocean temperatures and cold land masses generate continental-scale atmospheric disturbances known as Rossby waves. If these are large enough, they can reach into the stratosphere and break like a wave over a beach, compressing and warming the air in the stratosphere above the pole,” the Nature reported.

While it is unclear what sparked this year’s sudden stratospheric warming, scientists argue that it is not caused by global warming.

“We view SSW as a natural, internally-generated phenomena,” Harry Hendon from BOM, was quoted as saying to ABC news. “It just happens to be very rare in the southern hemisphere,” he added.

While January 2019 was the hottest for Australia, the continent also recorded the fourth-driest January–September on record and the driest since 1965.

Rainfall in September was very much below average for most of Australia. Rainfall was fourth-lowest on record for Australia as a whole in the last 120 years.